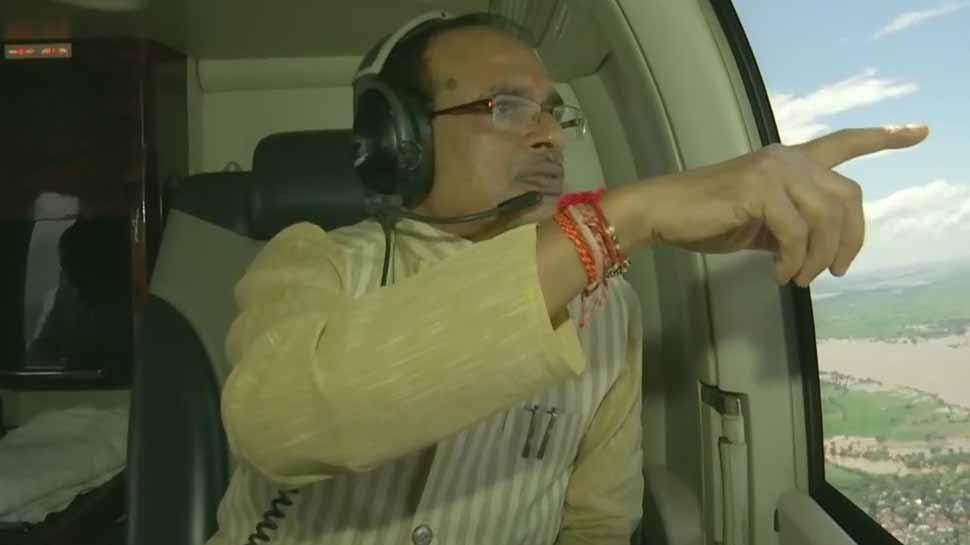 Bhopal: Heavy showers in several parts of Madhya Pradesh for the past couple of days has caused a severe flood-like situation in the state. Chief Minister Shivraj Singh Chauhan took an aerial survey of flood-affected areas in Vidisha on Sunday (August 30, 2020).

He stated that in the last two days, as heavy rains hit large parts of the state, over 7,000 people from 454 villages of 12 districts were evacuated.  “Eight people have died in wall collapses and swollen nullahs so far,” Chouhan said. As of now, 9,300 people are staying in 170 relief camps in the state.

The CM informed that efforts were on a war-footing to evacuate a further 1,200 people who were stranded in as many as 40 villages in the state.

“I informed Prime Minister Narendra Modi about the flood situation this morning. I spoke to Defence Minister Rajnath Singh last night for help,” he told PTI.

As many as three helicopters of the Indian Air Force have been pressed into service to help in evacuation while request has been made for two more choppers. A column of 70 Army personnel are working and have evacuated people from flood-hit areas in Hoshangabad, more columns of the military have been requisitioned, Chauhan said.

Heavy rains pounded nine districts of the state, including Hoshangabad, Sehore, Chhindwara and Narshinghpur, leading to a rise in the level of the Narmada river at some places in the last two days. While more rains are expected in the next 24 hours. Authorities in Indore, Ujjain, Shajapur, Ratlam, Dewas, Jhabua, Alirajpur, Mandsaur and Neemuch have been alerted.

Meanwhile, India Meteorological Department centre in Bhopal said that a well marked low pressure area causing rains in the state has advanced over west Madhya Pradesh and (adjoining) eastern Rajasthan. The pressure system is likely to shift to Rajasthan by 7 pm or 8 pm.

Without Music, Tanglewood Is Empty, Eerie and Beautiful

In Tight Race for Polish President, Andrzej Duda Is on Track to Win

7 Things to Do on Labor Day Weekend