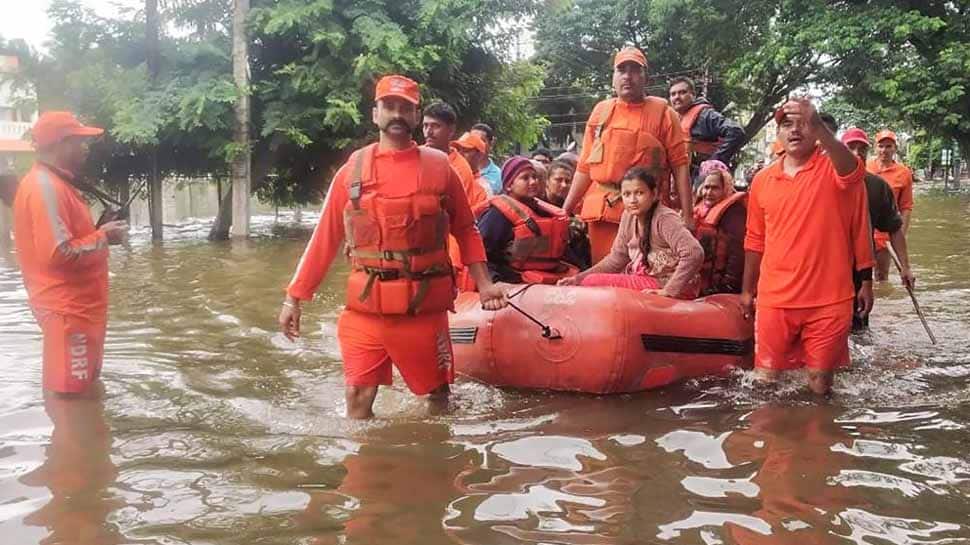 Nagpur: More than 18,000 people were evacuated after torrential rains in the last two days triggered flooding at several places in Nagpur and some other districts in Vidarbha region of Maharashtra, officials said on Sunday.

Apart from Nagpur, Gadchiroli, Chandrapur, Bhandara and Gondia districts in east Vidarbha bore the brunt of the rain fury on Friday and Saturday, they said.

Till Sunday evening, as many as 18,261 people were evacuated from 148 affected villages in these five districts, the Nagpur divisional commissioner office said.

The number of villages that were affected by heavy rains was 51 in Nagpur district, 57 in Bhandara, 30 in Gondia, six in Chandrapur and four in Gadchiroli, it said, adding that all these districts fall under Nagpur division.

In all, 83 relief camps were set up for the affected people.

According to officials, in Nagpur district, Mouda, Kamptee, Parseoni and Kuhi were the worst affected tehsils, and the administration had to call in the National Disaster Response Force (NDRF) and the Army to rescue people at some places.

Till around 6 pm on Sunday, 14,800 people were evacuated from 51 affected villages in Nagpur district as incessant downpour in the last two days resulted in flow of water from dams and rivers, the official statement said.

Nagpur Guardian Minister Nitin Raut inspected the affected areas with district collector Ravindra Thakre and directed the administration to conduct assessment of crop damage due to rains and flooding.

Maharashtra Revenue Minister Balasaheb Thorat tweeted that he was constantly taking a review of the flood situation in east Vidarbha.

Minister of Relief and Rehabilitation Vijay Waddetiwar is coordinating with all the administrative departments and giving necessary directions to the state control room, he said.

Defence spokesperson Basantkumar Pande said that as per the request made by the Nagpur district administration, Army was deployed for assistance in the submerged areas of Kuhi.

“UMANG Sub Area pressed into service two columns overnight for rescue and relief operations. With the unprecedented rains and resultant heavy flow of water in various rivers, a number of areas in Nagpur district have been inundated,” he said in a statement.

“The Army columns will be assisting the administration in rescuing villagers stranded in submerged areas of Kuhi and the surrounding places, and also help in restoring normalcy in these inundated areas,” he added.

The Last Days of Pop Smoke

China Tones Down ‘Hotheaded’ Nationalism as Relations With U.S. Sink

N.C.A.A. Doctors Say Football Is a Bad Idea. But They Aren’t Deciding.