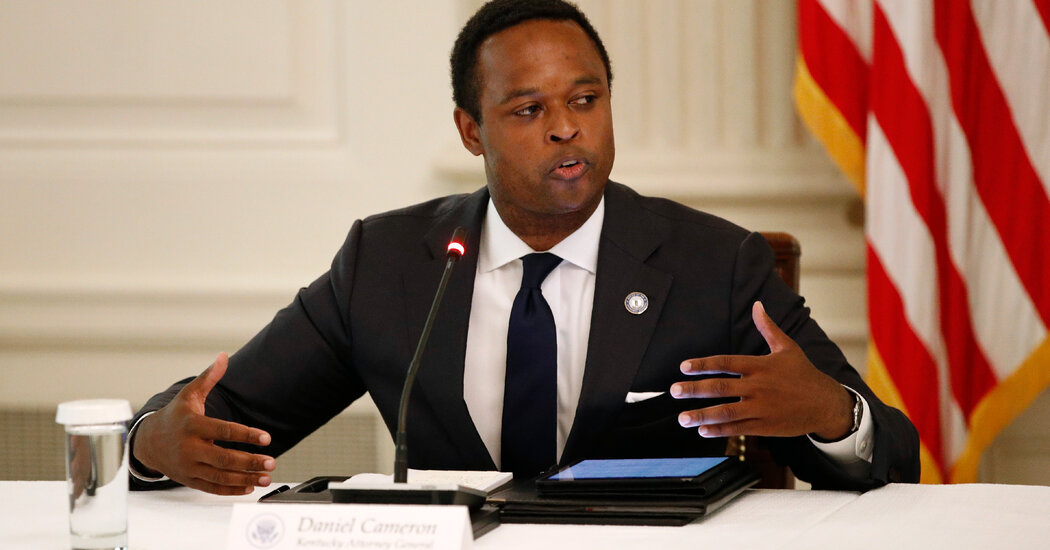 Attorney General Daniel Cameron of Kentucky said on Sunday that he had received a ballistics report on the police shooting of Breonna Taylor, calling it a “critical piece” of the investigation.

Ms. Taylor, 26, was shot and killed in March when three police officers with a “no-knock” search warrant forced their way into her Louisville apartment without warning in the middle of the night.

“It’s not the end-all be-all,” Mr. Cameron said of the report on the CBS program “Face the Nation.” “There are still some witness-testimony interviews that have to be conducted.”

He said he would meet with F.B.I. agents this week for a “painstaking review” of the new information in the report. The shooting is being investigated by both the state authorities and the F.B.I.

Mr. Cameron declined to say what the ballistics report found or what further information was needed before his office would make a decision about criminal charges in the case. “I don’t want to get into the specifics,” he said. “It is an ongoing investigation, and I don’t want to compromise it in any way.”

He added that his office was “leaving no stone unturned.”

David James, president of the Louisville Metro Council, said in an interview that although the ballistics report was an important element of the case, “it’s just a step along the path,” and did not signify that the investigation was nearing its end.

The circumstances of the shooting and the investigation have fed into the widespread anger and protests across the nation over police use of deadly force, especially against Black people.

Before the shooting in March, the Louisville police were investigating two men who they believed were selling drugs out of a house in another part of the city. A judge signed a warrant allowing the police to search Ms. Taylor’s residence because the police said they believed that one of the two men had used her apartment to receive packages.

The warrant was what is called a no-knock warrant, which permits the police to enter the premises without warning and without identifying themselves as law enforcement officers. After a public outcry over the killing of Ms. Taylor, Louisville officials banned no-knock warrants this summer.

One of the three officers has been fired. In his termination letter, the police chief said the officer had “displayed extreme indifference to the value of human life” by “wantonly and blindly” firing 10 shots from the street into Ms. Taylor’s residence.

Benjamin Crump, the lawyer for Breonna Taylor’s family, said on “Face the Nation” that the delivery of the ballistics report was “welcome news,” but that he was frustrated that Mr. Cameron was still not ready to announce criminal charges against the officers.

“It’s just been delay tactic, delay tactic, delay tactic,” Mr. Crump said of the investigation from Tallahassee, Fla. “We’ve been told when they get the ballistics report, that’s what they needed to wrap up this investigation and finally give them answers that they so desperately want,” he said, referring to Ms. Taylor’s family. “At this point, we are hoping that this conclusion will be sooner rather than later, because justice delayed is justice denied.”

With a Fortifying Soup, Haitians Share Their Pride in Independence