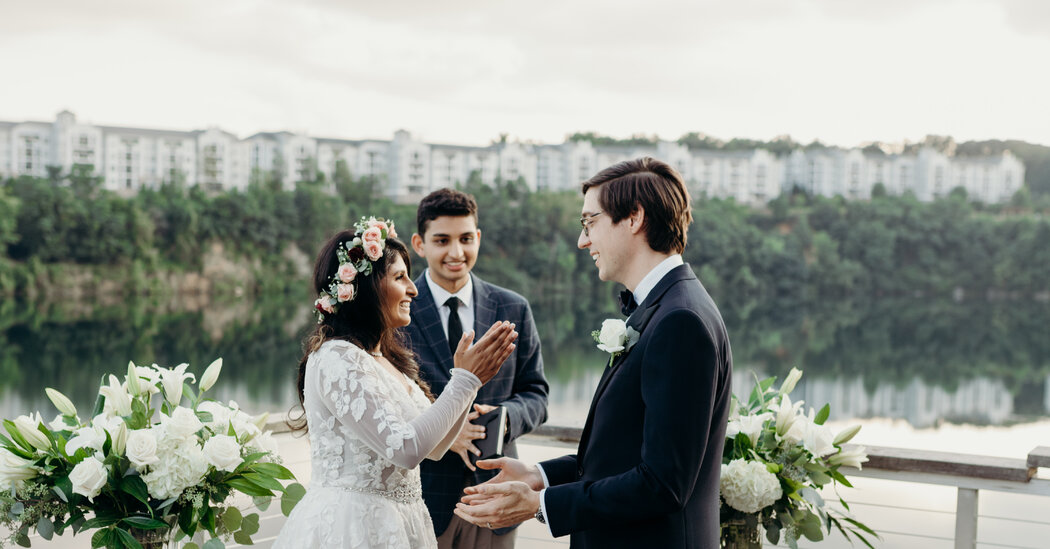 A year ago, a wedding for fewer than 300 seemed impossible to Shravani Durbhakula. “When you’re an Indian person, you don’t get to have an intimate wedding,” she said. Because, she said, tradition often dictates a multiday celebration with extended family, “it just doesn’t happen.”

Yet in a pandemic, sometimes it has to.

Dr. Durbhakula, 32, is an anesthesiologist and pain doctor who expects to graduate from a Master of Public Health and Master of Business Administration program at Johns Hopkins University, in Baltimore, in 2022. She met Bryan Marascalchi, 33, also an anesthesiologist and pain doctor, in a Johns Hopkins Hospital operating room in July 2017. She was an assistant program director of a pain management program there and he was a resident.

“Bryan had just patented a medical device, and someone was telling me I needed to know about it, so I looked up his schedule and tracked him down,” she said. They hit it off. Dr. Durbhakula remembers thinking she would like to date him, but two obstacles popped up. One, he was in a relationship. And two, she was technically one of his supervisors.

Dr. Marascalchi felt a spark, too. “I remember liking her very much and thinking she was very beautiful and saying to myself, Well, I’ve got to be careful here,” he said. For more than two years, they were. And that was despite a lot of bonding, both professional and personal.

“He saw me at my best and my worst in the operating room, like if something went wrong with a patient and I was upset, or if something went really right,” she said. “And I would sit in on evaluations of him with my colleagues.”

In addition, they saw each other at a studio outside the hospital where Dr. Durbhakula works on Pain Rounds, an internet show she created to teach pain medicine to aspiring physicians. “Bryan’s very techie, so he would help me out a lot with filming and editing.”

In the summer of 2019, Dr. Marascalchi graduated from his fellowship. He was also no longer seeing the woman he was involved with when they met, so he asked Dr. Durbhakula for a first date. In late August, they had dinner at the Bygone, a restaurant at the Baltimore Four Seasons. By late December, they were engaged.

“Everyone says opposites attract, but that’s definitely not the case with Shravani and me,” Dr. Marascalchi said. “We’re very similar. We have a lot of core things in common.”

Background is not one of them. Dr. Durbhakula, who grew up in Kendall Park, N.J., is Hindu, and Dr. Marascalchi, who grew up in Syracuse, is Roman Catholic. When Dr. Durbhakula said yes to his proposal, they decided they would hold two ceremonies, one with a white dress and the other with custom-made Indian wedding clothes. The timing would be up to Vedic astrologers, who study a couple’s birth dates and times to find auspicious dates.

“They ran our stars against each other and found the only Saturday to get married was May 23,” Dr. Durbhakula said. For a while, that was the plan. Coronavirus quickly derailed it. The astrologers returned to the drawing board, dug deeper, and came up with two others. Nov. 21 would be too cold, they decided. So Aug. 8 was the date.

The drastically scaled down wedding they held at Citron Restaurant and Bar in Baltimore — instead of 300 guests, they had five — found Dr. Durbhakula wearing neither of the wedding outfits she had planned; she bought a new dress so she can reveal the others at a post-coronavirus reception. But the day felt as auspicious as was promised.

Her brother, Sharat Durbhakula, 23, ordained through the Universal Life Church, officiated. “I had never seen that kid cry, but it was the most emotional, sweet ceremony,” she said. “It was truly a fairy-tale day.”

The Strange Success of the Coronavirus Conventions