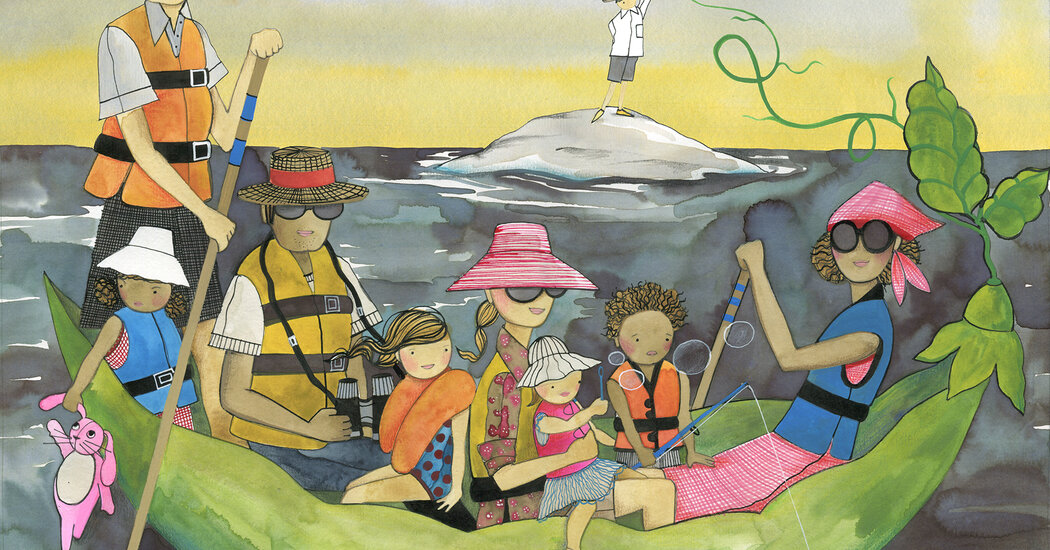 Sometimes, while scrolling through the lives of other people on Instagram, Andria Ryberg imagines a life where she gets to be in a pandemic pod with Kristen Bell. The actress recently shared vacation photos of a trip with another family to Sedona, Ariz., and Ms. Ryberg wanted in.

There they were, relaxed and at ease, as if plucked from some other time — grown-ups from separate households hiking through the rugged landscape, having dinner under the same roof, their children tramping through a creek together like it was a totally normal thing to do.

Kristen Bell has a bubble. And Ms. Ryberg does not.

“She has this whole pod and her kids are in it. See, my kids could have friends,” said Ms. Ryberg, 37, who works in early childhood education. “But that’s probably not happening.”

Ms. Ryberg and her family moved to Saratoga Springs, N.Y., from Michigan a year ago, and were just beginning to settle in and meet other people when the pandemic hit the United States. Their daughter, Ellie, 9, had joined a Girl Scout troop. Their son, Luke, 5, was meeting children in preschool. The family had found a church.

But in March, all that ended. Tom Ryberg, 38, a chaplain, works at Albany Medical Center, putting him at higher risk for contracting and spreading Covid-19. But even if he didn’t have a high-risk job, who would they see anyway? There haven’t been any invitations to decline. Now, as families scramble to set up learning pods to get through a year of remote school, Ms. Ryberg is realizing that her children probably won’t be invited to one of those, either.

For many Americans, the salve for an extended period of limited social interaction has been the quarantine bubble, the informal arrangement with another household to exclusively spend time together. Agree to a set of safety precautions, and there’s a reprieve from the numbing boredom. Add to that the proliferation of learning pods, where families pair up to educate their children at home, and bubbles are seemingly everywhere.

But with such exclusive invite lists, not everyone can be on one. For those without a bubble to call their own, the world can feel like a series of tiny cocktail parties that never includes them.

Pandemic bubbles are “going to lead to natural feelings of exclusion. We know from human science that we’re prone to feel rejection even if we’re not being rejected,” said Shasta Nelson, a friendship expert and author of “The Business of Friendship: Making the Most of the Relationships Where We Spend Most of Our Time.” Rejection “hurts us the same way as physical pain hurts us, so it is real and all of us feel that.”

The pain might be real, but Ms. Nelson cautions those who feel slighted to temper their expectations — it’s often not personal. People make pod choices for myriad reasons that have nothing to do with you — their children are the same age, they share similar social distancing behaviors, or they have schedules that align. But when you have nothing but time on your calendar, it’s hard to look away from what looks like fun happening on someone else’s social media feed.

Ms. Ryberg moved to Saratoga Springs to live closer to her aging parents. But now she rarely sees them because they are at higher risk for complications from Covid-19, and when she does see them, the visits are brief and at a distance. So instead, she spends her hours eyeing the social lives of other people, like the mother of a girl in her daughter’s Girl Scout troop who recently posted photos on Facebook of a vacation at a lake house. “She was up there and the kids were all hanging out together,” she said. “I’m not super close to her or have any reason to feel left out and it’s not like I know her that well. But my kids are literally sitting here at our house just hanging out here. That’s it, that’s all they ever do.”

Then there are the learning pods, turning the upcoming school year into something of a popularity contest orchestrated by parents desperate for a solution to endless remote learning. These pods, some led by educators and others by parents, have been criticized because the invite-only arrangements risk favoring wealthier, better-connected families, who are often white, leaving behind classmates who may be poorer, are minorities, have special needs or have trouble making friends.

“A kid who’s not chosen to be in one of these pods, there is a huge psychological burden that they could be facing,” said Carla Pugliese, an educational consultant who has been advising parents on pods. “It’s like not being invited to the birthday party. ‘I know that I’m not in the in group; what’s wrong with me?’”

At a time when there are few opportunities for social interaction, not getting invited to the pandemic version of the birthday party can sting. And it’s not like we all had glowing social lives before all of this. In January 2020, 61 percent of respondents to a Cigna survey felt lonely. While stay-at-home orders and social distancing practices haven’t necessarily made the situation worse, as a study published in June in the journal American Psychologist found, they certainly haven’t made it better. We have lost the everyday distractions — the small talk at the school drop-off and pickup line, the banter at the office, the often tedious networking events.

“We were able to avoid the fact that we were lonely before this because we could stay busy with a whole bunch of people,” Ms. Nelson said. “This is eliminating a lot of the filler and giving us the opportunity to say ‘Wow, I really need to make sure that I have a good support system in place and have close friends and meaningful friends.’”

To make those deeper connections, Marisa G. Franco, a psychologist who specializes in friendship, suggests calling an acquaintance you like to see where the conversation leads — they may be lonely, too. “People are so passive when it comes to friendship,” she said. “We don’t initiate.” But people who do make the first move are more satisfied, she said.

In other words, if no one invites you to a pod, create your own.

But here’s the rub: When you’re trying to avoid getting a potentially deadly virus, is a pod with people who aren’t already your nearest and dearest friends worth the risk? Ms. Ryberg has been considering talking to other parents at her daughter’s school about setting up a learning pod — her husband plans to leave his job in the fall to help the children with distance learning.

But then the couple started thinking through the details. They worried they wouldn’t be able to safely visit with Ms. Ryberg’s parents at the holidays if they spent so much time around other people. Were they willing to trade Christmas with the grandparents for Ellie to have time with a few classmates? And Mr. Ryberg wasn’t sure he wanted to commit his days to supervising and educating other people’s children.

“At the end of the day, who’s more important for us to have a relationship with?” Ms. Ryberg said. “My parents or some kids we don’t really know?”

And so, there goes the bubble.

Your Coronavirus Test Is Positive. Maybe It Shouldn’t Be.