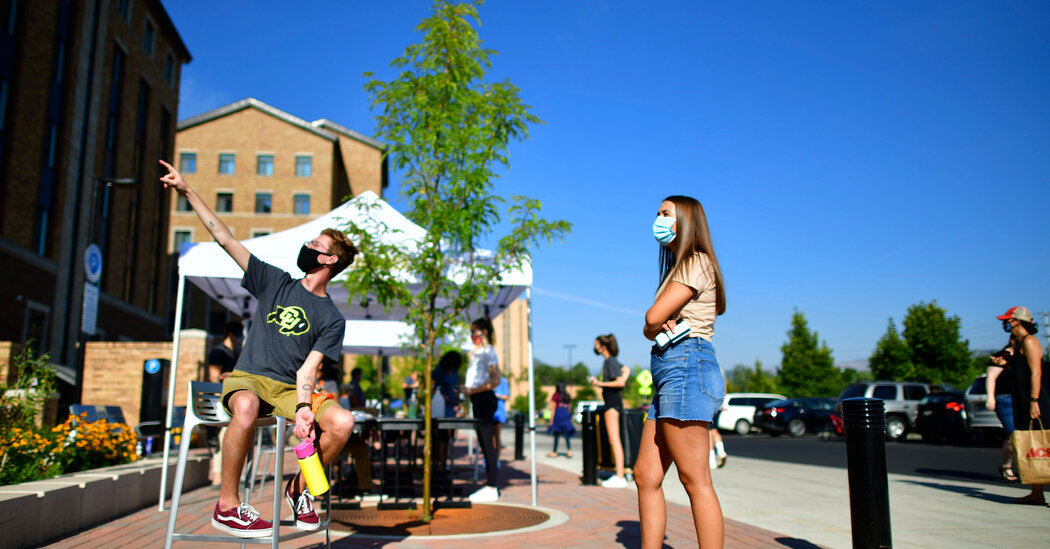 Resident advisers have always played a key role in how colleges implement behavioral policies. An R.A. will typically oversee a dormitory floor or building; they are responsible for limiting parties and helping new students settle in. At some schools, R.A.s are trained in how to help prevent sexual assault. Now, colleges have drafted them to another front line.

They are responsible for patrolling dorms for students hanging out in groups larger than four, enforcing universal mask mandates and reporting fellow students that are violating social distancing rules.

Administrations are attempting a herculean task: changing the behavioral patterns of an entire generation of college students overnight. “We have to understand that we have 18- and 20- to 22-year-olds,” said Patricia A. Whitely, the vice president for student affairs at the University of Miami, which reported 140 positive cases in its first week back. “Nobody ever said that we weren’t going to have Covid cases. It’s a matter of how are we going to manage.”

The University of North Carolina and Notre Dame all canceled in-person instruction after hundreds of students tested positive for coronavirus nearly immediately. All told, more than 26,000 cases have been reported at more than 750 schools, with some schools stricken with hundreds of cases within days of reopening.

Students have been suspended and kicked out of student housing at some schools for violating social distancing policies and hosting parties. Still, there are limits on what schools are capable of. “University authorities cannot be in all spaces at all times,” Notre Dame authorities wrote in an email to students reprimanding them for not social distancing.

So much of the enforcement responsibilities is falling on students themselves, who often sign up to be R.A.s as a way to make friends, help incoming freshmen and earn a discount on tuition.

Liz Cantlebary, 21, a Cornell senior, did not anticipate that her job would involve reporting groups of students for social distancing violations, wearing a face shield while patrolling dorms and worrying that she might spread the virus herself.

R.A.s will be doing regular “rounds in up to four different communities,” Ms. Cantlebary said, “meaning that they’re entering buildings and communities that they wouldn’t have to enter otherwise. And so one of our primary concerns with that is that we will accidentally become like vectors almost for the coronavirus to spread among multiple halls.”

Typical R.A. responsibilities — including breaking up parties and cleaning up vomit in their aftermath — now potentially put the R.A.s themselves at risk of exposure.

“A lot of the ways that we would be enforcing physical distancing are ways that many of us have enforced before — for example, breaking up a party on a floor,” said Athena Scott, 20, a senior and R.A. at Cornell. “It’s just now that there’s a pandemic that is complicated, so we just want to feel protected during those interactions. Like, I knew when I signed up for this job that I might have to break up parties, but breaking up parties during a pandemic is a little different.”

At Louisiana State University, three R.A.s of the 250 who are responsible for safeguarding the school’s 7,000 incoming students recently quit because the school hadn’t satisfactorily addressed their safety concerns, they said. “It seems like, so much, they’re wandering through it as we go along and hoping everything will be OK,” said McKay Stevens, a senior, in an interview with The Advocate.

At her R.A. orientation, Ms. Stevens asked administrators what to do with students who test positive. “They said, ‘don’t manifest that into this atmosphere,’” she said.

Enforcing social distancing also requires a level of surveillance that makes some students feel uncomfortable, even though they understand the necessity. At Cornell, students use an app to note violations.

The latest on how schools are reopening amid the pandemic.

Typically, R.A.s report students for behavior violations using an app with a drop-down menu that includes offenses like alcohol, drugs or sexual misconduct; now, the school has added a tab for Covid-related misconduct.

Already, the R.A.s have seen students coming back to the dorms at night from off-campus parties, inebriated and sometimes without masks. At that point, their instructions are not to engage, in order to minimize their exposure, but to use the reporting app to log the names and behaviors of the students, who will then face disciplinary action (up to and including expulsion for the most severe violations, like hosting a party).

In August, R.A.s at Cornell went on strike, saying that they weren’t being offered sufficient protective equipment. “Please consider taking a stand with us,” read an email that the strike organizers sent to R.A.s, which was reported by The Cornell Sun. “We cannot allow Cornell to take advantage of their front line, especially now when lives are at stake.”

Other R.A.s report they are similarly undersupported.

At UMass Amherst, “the university told us that we should be able to wear one mask for an entire week,” said James Cordero, a senior and an R.A., noting that this policy went against federal mask-usage guidelines. “So we fiercely pushed back against this and did win seven masks for every R.A.”

Ramon Reyes, 20, a senior and an R.A., said, “This is the great Cornell experiment.” While other Ivy League schools, including Harvard, have not opened campuses, Cornell is eager to thrive in the pandemic.

“I think that’s part of the reason why the administration is so keen on making this work, is because they want to be the ones who do it,” Mr. Reyes said. “But we feel also that what comes with that is that they’re making it up as they go.”

He appreciates that the administration is trying to adapt to changing and challenging circumstances. “But when you’re making up plans as you go along, oftentimes responsibilities get pushed farther and farther down the chain and we feel that the brunt of the responsibility was thrust upon us,” he said. “And that’s something that we didn’t necessarily sign up for.”