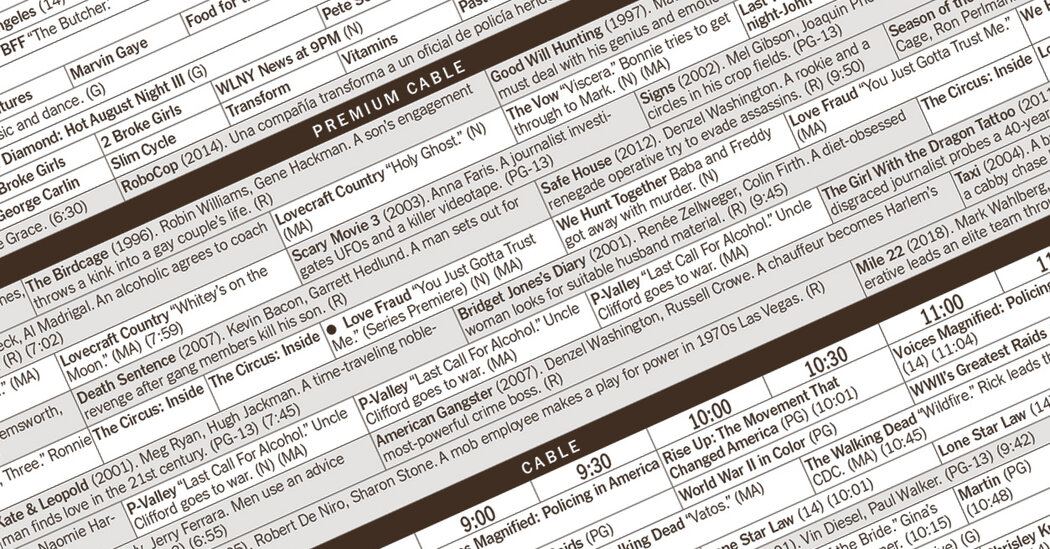 After 81 years, this weekend will be the series finale for the daily television listings in the print editions of The New York Times.

The majority of subscribers won’t even notice the removal of the TV grid and accompanying What’s on TV column after this weekend’s papers: For years now, The Times has published the grid only in its New York City edition, and not the national one. But like any cancellation, the change is sure to leave some readers disappointed.

Gilbert Cruz, The Times’s Culture editor, said the time had come because of the increasing number of digital on-demand options. “We are firmly in the streaming age,” he said, “and the TV grid no longer reflects the way people consume television.”

“It used to be you’d flip through the TV guide and say, ‘Oh my God, this movie is on basic cable this week!’” he added. “But now that buzzy show is on Netflix whenever you want to watch it.”

The change also enables The Times to print a single version of its Arts section for both city and national subscribers, helping ensure that the paper reaches readers on time. “We’re trying to streamline the production process as much as possible amid the pandemic,” Tom Jolly, The Times’s associate masthead editor who oversees the print edition, said.

Even without the grid, The Times’s TV coverage remains as robust as ever, said Mr. Cruz, who was once the paper’s television editor. In print, the Sunday At Home section includes a roundup of streaming options. And online, readers can browse recaps of shows like “Star Trek” and “Saturday Night Live”; catch up on late-night highlights; and see new shows coming to streaming services like HBO Max and Hulu each month. Also, the Watching newsletter, which comes out four times per week, serves as a curated guide through the maze.

Lorne Manly, a senior editor on the Culture desk who has been involved in the paper’s television coverage since the early 2000s, said the old model of reviewing nearly every network and cable show now seems laughable. He added that reporters pivoted to doing more essays and critic’s notebook pieces as the volume of content grew. Now some of the paper’s most popular television articles are its regularly updated lists of The 50 Best Movies on Netflix Right Now and The 50 Best Things to Watch on Disney + Right Now.

Writers also devote considerable website space to covering some of the most popular series: Jeremy Egner, The Times’s current TV editor, became a “Game of Thrones” guru over the past five years as he dashed off Sunday-night recaps, some of which garnered more than a thousand comments.

The content crush is a far cry from May 18, 1939, when television listings began appearing regularly in the paper. That day, at the bottom of the Today on the Radio column — The Times considered television a form of radio for quite a long time — a few lines briefly noted the frequencies and a mention that an 11 a.m. to 4 p.m. bloc would consist of “Films.”

One paper in January 1945 included just four television listings at the end of the section, one of them citing two and a half hours of local wrestling. In March 1988, the prime time lineup began appearing in grid form, with nearly 40 channels listed. On one Tuesday night, viewers could take in three episodes of “Cagney & Lacey.”

When the paper stopped publishing its weekly TV guidebook in 2006, a subscriber uproar ensued. “The customer service people were overwhelmed,” Mr. Manly said. “We got lots of angry calls.” At the time, digital and streaming options were still a novelty. But now, he thinks even those who don’t like the decision will accept it.

Mr. Cruz said he is aware that the grid still has its devotees. “There are people who will tell me, ‘I rely on it and I expect it to be there every day,’” he said. “And I expect that those people will email me when it goes away. I’d be happy to explain.”

For Greece’s Theaters, the Coronavirus Is a Tragedy