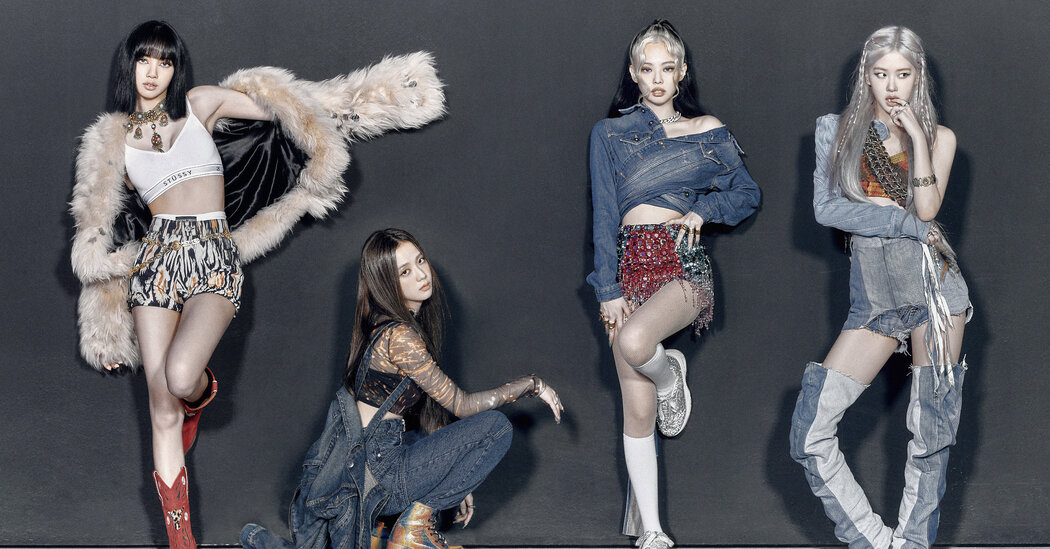 The sweet spot at the intersection of Selena Gomez and the K-pop stars Blackpink involves a kind of singing that’s a little playful, a little taunting, a little distant. “Ice Cream” is all of those things, a relentlessly bouncy and chipper song about being the object of other peoples’ hunger. JON CARAMANICA

Some al fresco rapping from Cam’ron — still a mercilessly precise rapper at 44 — filmed in a Harlem parking lot, prompted by a friend’s nudging and posted on Instagram. The rhymes are spry and wry: “Y’all know Harlem belong to me/I don’t want it, it’s too gentrified/I’m from the era of genocide, bodies are unidentified, alibis are memorized.” CARAMANICA

Dumpstaphunk, ‘Where Do We Go From Here’

Ivan Neville’s commanding New Orleans funk band, Dumpstaphunk, marks the 15th anniversary of Hurricane Katrina with “Where Do We Go From Here,” only to have Hurricane Laura hit Louisiana this week; lately, Neville has also been livestreaming from his home while recovering from Covid-19. The new song’s lyrics aren’t particularly pointed: “Let’s take it slow, no fear,” it counsels, adding, “It all comes down to love.” But the full-band groove — with horns, backup singers, Neville’s organ and Dumpstaphunk’s deep-in-the-pocket rhythm section, including two basses — infuses a slinky funk backbeat with gospel determination and the will to persevere for a steamy eight-minute jam. JON PARELES

The victorious assurance of “Woman” comes through in its unhurried backbeat, in the shimmery tones that usher in the chorus and in the unpatterned, utterly cooperative way Lianne La Havas and the higher-voiced Nao share and trade bits of both verses and choruses. “Take my mirror out the bag and fill it with confidence,” Nao sings; “A woman’s worth is everything without you baby,” Le Havas adds. There’s no need to be combative; they’ve won. PARELES

The magnificently prolific songwriter, singer and producer Georgia Anne Muldrow calls herself Jyoti when she turns toward jazz, as she does on her new album, “Mama, You Can Bet!” Although the music sounds like it was made by jazz groups interacting live, Muldrow multitracked all the instruments and vocals herself as a one-woman studio band. “Ancestral Duckets” is a sly waltz that roams purposefully through chromatic chord changes and sprouts a multitude of Muldrow’s vocals: harmonizing, scatting, riffing, taking over the melody and then playfully sailing above it. PARELES

On her album released on Friday, “Inner Song,” the Welsh songwriter Kelly Lee Owens uses the chilly, artificial electronic vocabulary of techno for songs about love: strained, lost, possibly found anew. In “On,” she stacks up choirlike vocals as she moves on from a romance: “We can’t go forward,” she decides, as a double time club beat ticks quietly behind her. But three minutes into the song, the throbbing bass line suddenly cranks up, staggered against programmed hi-hats, a blooping synthesizer line and cascading, wordless vocals; she can dance her way free. PARELES

The Kurdish-Swedish singer Zhala teamed up with the producer Olof Dreijer of the Knife for her first song since her 2015 debut album. Summoning multiple voices — blithe, assertive, witchy, whooping, belting — Zhala sustains phrases like “I lose myself in time” amid a track of skittery, percussive plinks, clatters and hisses that keeps adding unexpected layers on the way to a galloping peak, as propulsive as it is inscrutable. PARELES

The New Orleanian trumpeter Christian Scott aTunde Adjuah recently became chief of the Xodokan Nation, a group from the city’s Black masking tradition. (More widely known as Mardi Gras Indians, Black community leaders in the tradition don ornate regalia for holiday marches, honoring the Indigenous people who often sheltered African-Americans escaping bondage in the 18th and 19th centuries.) Masking celebrations involve an explosion of color, music and movement. So the blazing, kaleidoscopic effect of the music on “Axiom” — the trumpeter’s new live album with his septet, recorded at the Blue Note in New York just before the coronavirus lockdown — makes a special kind of sense. On the first track, “X. Adjuah (I Own the Night),” Corey Fonville’s drumming blurs with Weedie Braimah’s djembe strokes, conjuring a hail of blows from a boxer, or perhaps simply the sound of energy being unloosed. Though slower and more measured, the glowing notes that Adjuah plays above them are no less packed with muscle and force. GIOVANNI RUSSONELLO

Even better than the improved rapping from teen breakout Lil Tecca — richer in melody and density than before — is the luscious beat by Z3N and Sean Turk, with echoes of 1990s New York rap sprinkled atop its contemporary smeared production. CARAMANICA

The jaunty, old-fashioned bluegrass bounce and close-harmony choruses of “Watch It Fall” belie the bitter resignation of the lyrics, as the flat-picking guitar virtuoso Billy Strings sings about converging catastrophes: inequality, corruption, global warming. “How long until there’s nothing left at all?,” he wonders, and all the filigreed acoustic improvisation around him is no answer. PARELES

Fragile but tenacious, carried mostly by a lone strummed acoustic guitar, Emily King moves from isolation and self-doubt — “If I cry out loud will you believe me?” — to conjuring a community of her own. With little more than ghostly vocal harmonies and a few notes from a distant piano, it’s both crystalline and eloquent. PARELES

There’s a sense of historical unity in the saxophone playing of J.D. Allen: The elegance of Coleman Hawkins and the spiraling power of John Coltrane come together. The ludic energy of, say, Rahsaan Roland Kirk and the spry focus of Michael Brecker, too. On “Toys/Die Dreaming,” Allen’s latest album, his stil-newish trio shows how much it has grown together since last year’s “Barracoon.” On the closing track, the Allen original “Elegua (The Trickster),” the young bassist Ian Kenselaar and the drummer Nic Cacioppo make a briskly swinging bed for Allen’s forceful playing, as wily and powerful as the tune’s namesake. RUSSONELLO

The Pentagon warns adversaries that domestic terrorist threats won’t distract it from foreign ones.

How Equity Is Lost When Companies Hire Only Workers With Disabilities

Tom Who? Cam Newton Is Moving New England Past Brady