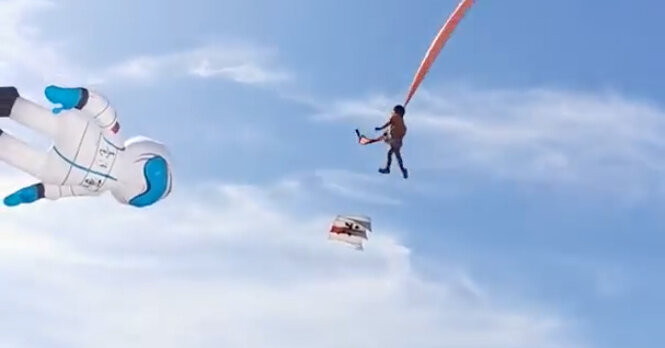 HONG KONG — A 3-year-old girl was swept high into the sky after a streamer became tangled around her neck during a kite-flying festival in northern Taiwan this weekend.

The child hovered above throngs of spectators and was zipped around by strong winds for a heart-stopping 30 seconds amid inflatable pandas and astronauts as screams erupted from spectators.

The girl, who was identified by news outlets only by her last name, Lin, landed mostly unscathed at the Hsinchu International Kite Festival. She suffered abrasions around her neck and face, the mayor of Hsinchu, Lin Chih-chien, wrote in a Facebook post on Sunday. She was admitted to a hospital for a medical examination, he said.

The startling episode drew an apology from the mayor, led to the suspension of festivities and added a frisson of horror to an event that usually draws tens of thousands of visitors for what’s supposed to be a fun time at the two-day festival.

“The city government expresses its deepest apologies to the public and to the individuals involved, and we will review the reasons to avoid this type of accident from ever happening again, conducting a thorough review and holding people to account,” he wrote.

The girl is not the only toddler to have found herself in a harrowing situation in recent days.

Last Monday in Greece, a 3-year-old girl was swept out to sea in a winged unicorn inflatable toy before she was rescued by a ferryboat captain.

The kite festival in Taiwan, featuring larger-than-life designs from around the world, took place on a grassy expanse at a fishing port on the last weekend before kindergartens and other schools reopened for a new year. On Saturday, the Asia Kite Foundation, a Taiwan-based group that helped promote the kite-flying event, had urged families to take care on Sunday, when gales were forecast for the afternoon.

Sure enough, the winds were strong.

At 4 p.m., children gathered around for the unfurling of a “candy kite,” officially named “Joy Falls From Heaven.” A compartment attached to the long, voluminous orange fabric was filled with candy, and once it was sent into the air like a flying piñata, confection was supposed to rain down. Footage showed several men struggling to control the long streamer as gusts of wind whipped it around.

Somehow, as a powerful draft lifted the ballooning kite from the grass, its tail lassoed the 3-year-old by the neck and hoisted her upward. The pumpkin-orange kite suddenly became a parachute.

Dangling from the kite, the girl was whizzed across a sky full of floating cartoon figures and jerked around like a spool. Screams and shouts could be heard.

When the winds shifted less than a minute later, the girl was spun rapidly in circles before people managed to pull the kite to the ground. Spectators jumped onto the kite’s tail to prevent it from taking off again.

Speaking to reporters on Monday, Shie Jiun-hung, an official with the Fisheries Department, said the girls’ parents had blamed themselves for the accident.

He said that the local government would no longer allow candy kites to take flight again in public events and would impose stricter rules in the future.

As for the girl, the official said that she returned home Sunday and promptly had a nap.