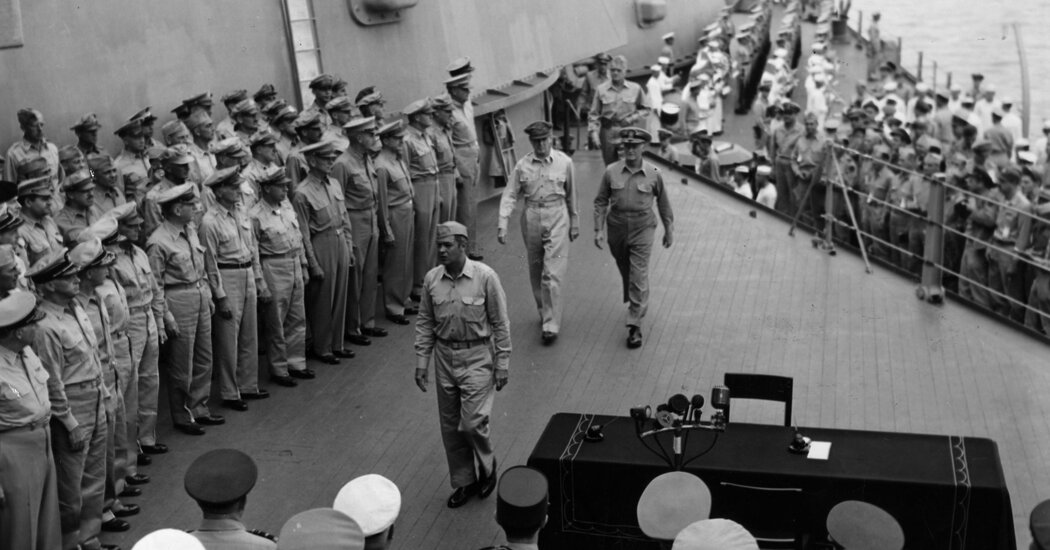 On the morning of May 8, 1945, Gen. George Marshall traveled from his Pentagon office to the White House to tell President Harry Truman that Germany had surrendered. “I’m glad to hear it,” Truman said, “because for a while there I thought we were fighting the British.”

The Marshall-Truman tale, though undoubtedly apocryphal, was repeated thereafter as a reminder that, during the war in Europe, the relationship between the British and Americans was so acrimonious that Marshall, and his British counterparts, feared their alliance might shatter. It didn’t, but a working knowledge of the fraught Anglo-American partnership remains crucial to understanding the European conflict. The same is true for the war against Japan, though for a different reason. There, the inter-Allied feuding that marred the war with Germany was replaced by a fractious competition between the United States Navy and the Army over resources, strategy and public acclaim.

It is a credit to the historian Ian W. Toll that this antagonism, played out through the personalities of Gen. Douglas MacArthur and Adm. Chester Nimitz, remains an important, but not crucial, subtext of “Twilight of the Gods,” the third volume of Toll’s superb trilogy on the Pacific War. In truth, as Toll implies, the MacArthur-Nimitz competition was never as enervating to the war effort against Japan as the American-British competition was in Europe. For good reason: By mid-1944, the United States war economy could provide both MacArthur and Nimitz with enough of what they needed so that the defeat of Japan, though it would cost more lives, was not in doubt. What’s more, the Army-Navy competition over strategy was driven by geography and not personality — with Nimitz hesitantly agreeing with MacArthur during a July 1944 conference in Hawaii (mediated by Franklin Roosevelt) that an American invasion of the Philippines was a military necessity.

Dispensing with the MacArthur-Nimitz meeting in his first chapter (it’s a good tale, but often told) allows Toll to turn his focus on the Navy, his true area of expertise as well as his enduring passion, and he deftly completes the portraits of Admirals Ernest King, Chester Nimitz, Raymond Spruance and William “Bull” Halsey that he provided in his previous volumes. What emerges is a study as detailed as it is unsparing, with King, Nimitz, Spruance and Halsey as pivotal to victory in the Pacific as George Marshall, Dwight Eisenhower, Omar Bradley and George Patton were to the victory in Europe. And while the names of these Navy giants do not roll off the tongue as readily now as those of their celebrated Army counterparts, they should — with Nimitz emerging as the true architect of America’s Pacific naval strategy and Spruance as his masterly, if sometimes overly careful, tactician. The rise of Nimitz and Spruance pushed the irascible King into the background, where he took on his proper role as the Navy’s key defender among the Joint Chiefs of Staff, with Halsey cast as Nimitz’s headstrong bad boy. But Halsey was not Nimitz’s Patton: Patton needed constant monitoring, but made few mistakes; Halsey was more pliable, but made mistakes galore.

The charge sheet against Halsey is long and complex, but is nowhere rendered more grimly than in Toll’s description of his “pattern of confusion, sloppiness and impulsiveness in basic procedures,” his “slapdash habits,” his penchant “to speak first and think later,” his persistent promotion of his own “glorified public image” and his questionable familiarity with naval aviation — a requirement, you would think, in a theater that featured carrier operations. But Halsey cultivated loyalty, and received it. Vice Adm. Roland Smoot, one of the Navy’s more acclaimed fighters, called him “a complete and utter clown,” while admitting that “if he said, ‘Let’s go to hell together,’ you’d go to hell with him.” Halsey was always on the edge of being fired, and knew it: “I am most apologetic for the present mix-up,” he wrote to Nimitz after one foul-up. “I can assure you that my intentions were excellent, but my execution rotten.”

As it turned out, Halsey’s rotten execution was nearly his undoing when, in October 1944, the Japanese lured him into a pointless pursuit of a group of stripped-down aircraft carriers during the Battle of Leyte Gulf. Once Halsey took the bait, the harrowing goose chase that followed left the rest of the American fleet vulnerable, an action that came to be known as “Bull’s Run.” Nimitz should have relieved Halsey, but didn’t: Firing him would have raised too many questions with an admiring public.

Toll’s expertly navigated narrative includes a number of new insights (the kamikaze strategy, for example, was more controversial inside the Japanese military than is generally acknowledged), as well as a new approach that hypothesizes the struggle between “sequentialists” and “cumulativists” inside the American military that, as Toll argues, “colored every phase of Pacific strategy.” The sequentialists, Spruance and Halsey among them, emphasized step-by-step tactical triumphs that would bring American forces to Japan’s shores for an ultimate invasion, while King and the Army Air Corps commander Gen. Henry “Hap” Arnold emphasized cumulative sea and air operations — the destruction of Japan’s merchant fleet, the strategic bombing of Japanese cities — that, they believed, would make an invasion unnecessary. Toll’s familiarity with this hitherto hidden tussle, while still incomplete, is elaborate enough to be provocative, which new historical ideas often are.

This makes Toll the fitting inheritor of a tradition of writing that began with the naval historian Samuel Eliot Morison, who in 1942 suggested to Franklin Roosevelt that he be assigned to document the Navy’s World War II battles as a “seagoing historiographer.” Unlike the Army, which sponsored the 78 invaluable volumes of “U.S. Army in World War II,” the Navy has never been keenly interested in its own history, which is why it hesitantly acquiesced to Morison’s request, and only because Roosevelt thought it a good idea. The Navy put Morison in uniform, made him a lieutenant commander, then dispatched him to the North Atlantic and Pacific as their official historian. While Morison’s resulting 15-volume “History of United States Naval Operations in World War II” is celebrated as classic and definitive, it is neither. Rather, it is overly triumphalist — and long. Toll’s trilogy is a departure: It is exhaustive and authoritative and it shows the Navy in World War II as it really was, warts and all.

But no history of the Pacific War can be complete without presenting an intimate knowledge of Japanese naval and political decision-making. Toll does this too, showing a tactile command of the subject that puts Japan’s war in its proper perspective — as an unnecessary fight that, in retrospect, looks like a suicide mission. For the first five decades after the end of World War II, American historians debated whether the turning point in the Pacific War resulted from the Japanese Imperial Navy’s defeat at the Battle of Midway (the preferred choice) or the Marine Corps victory at Guadalcanal — which has recently gained an increasing number of adherents.

Still, time, reflection and a growing appreciation for the sheer weight of American resources (and now Toll’s three-volume work) have once again shifted that debate. Japan lost the Pacific War, as Toll suggests, from the moment the first bombs dropped on Pearl Harbor. In the war’s aftermath, the Japanese people, Toll writes, realized this when it was revealed that many of those who took them to war not only foresaw, but actually predicted, its outcome — and went to war anyway. The decision, Toll writes, was based on the assumption that the American people were too “soft” to wage war and, once attacked, would look for a way out. It was the most egregiously false assumption in the history of warfare — as Toll’s trilogy eloquently shows.

How Mexico’s Drug Cartels are Profiting From the Pandemic

Gorillas at Zoo in San Diego Test Positive for Coronavirus

The Community That Covid-19 Built