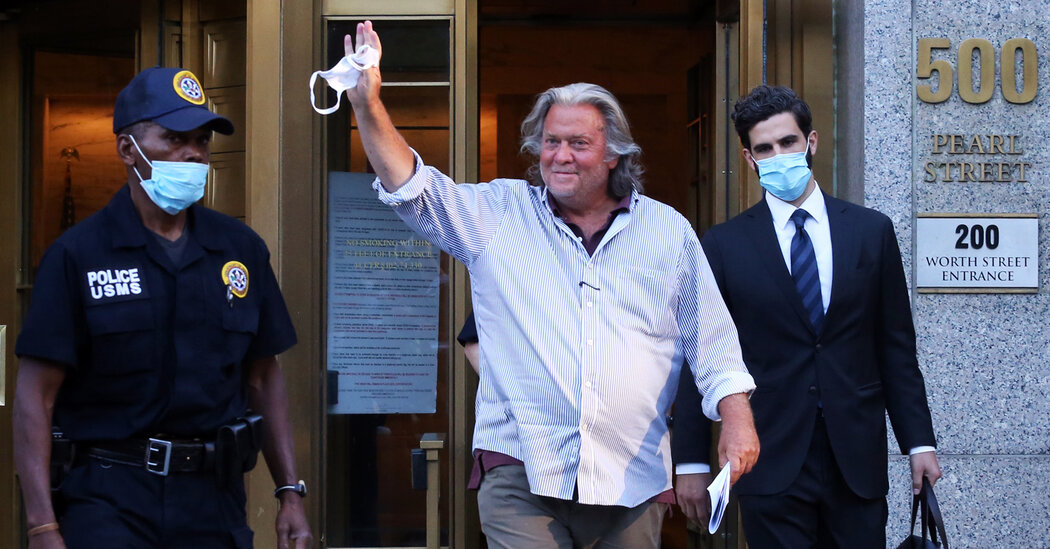 Federal prosecutors have seized “voluminous” emails and other communications in their case against Stephen K. Bannon, the former adviser to President Trump who is charged with defrauding donors to a private group that promised to build a wall on the Mexican border, the government said on Monday.

Mr. Bannon and three other men have been accused of stealing hundreds of thousands of dollars in the scheme. The campaign, known as “We Build the Wall,” raised more than $25 million from private donors by promising to build portions of the wall, the president’s signature political initiative.

Prosecutors have said that while thousands of investors were led to believe all their donations would go toward the project, Mr. Bannon diverted over a million dollars and used some of it for personal expenses. He pleaded not guilty on Aug. 20 and declared as he left federal court in Manhattan, “This entire fiasco is to stop people who want to build the wall.”

The government outlined the materials it had seized during a virtual court hearing in Manhattan Monday that also highlighted the charged, election-year atmosphere surrounding the case.

Prosecutors had complained to the judge about Facebook posts by one of Mr. Bannon’s co-defendants, Brian Kolfage, a disabled Air Force veteran who founded the group and in recent days has proclaimed on the social network that the prosecution was “political,” a “witch hunt” and an effort to take “political prisoners.”

Mr. Kolfage, 38, and two other defendants, Andrew Badolato, 56, and Timothy Shea, 49, pleaded not guilty during the hearing. None of the defendants were physically in court. Because of the pandemic, they, the judge, the prosecutor and defense lawyers appeared remotely from different locations on video screens, with five images visible at a time.

According to the indictment, Mr. Bannon and Mr. Kolfage “repeatedly and falsely assured the public” that all the money raised would go to the project and Mr. Kolfage would “not take a penny in salary or compensation.”

Mr. Bannon, 66, received more than $1 million through a nonprofit he controlled and then used it to pay Mr. Kolfage and also to cover hundreds of thousands of dollars in personal expenses, the indictment said.

He was arrested early on the morning of Aug. 20 as he was on the deck of a 150-foot yacht off Westbrook, Conn. It belonged to the fugitive Chinese billionaire Guo Wengui, officials have said.

During the proceeding, Judge Torres asked the prosecutors when they would turn over the evidence and other materials they have gathered to the defense, so defense attorneys can prepare for trial.

One of the prosecutors, Alison G. Moe, characterized the material as “voluminous,” and told the judge that investigators obtained some of it as far back as January after executing search warrants for email and cloud storage accounts.

Ms. Moe also said on Monday that Mr. Kolfage’s comments on social media had violated local rules governing the behavior of parties in federal court in New York. The prosecutors have said such posts could taint the potential jury pool.

In a letter to the judge last week, prosecutors had referenced “a steady stream” of “highly inflammatory” public statements that Mr. Kolfage had made since his arrest, including claims that the prosecution was an assault on the freedom of donors, made for “political reasons.”

Mr. Kolfage, an Air Force veteran from Miramar Beach, Fla., who lost both legs and an arm in a mortar attack in Iraq, initially created the wall project as a GoFundMe page in December 2018.

In one Facebook post cited by the government, Mr. Kolfage wrote that the U.S. attorney’s office in Manhattan “will ruin innocent people’s lives in order to have a war trophy pinned to the wall just before elections.”

Mr. Kolfage’s lawyer, Harvey A. Steinberg, argued in court that it was the prosecution that had made improper statements, not his client. He pointed out that one law-enforcement official had said in a news release that the indictment should serve as “a warning to other fraudsters that no one is above the law, not even a disabled war veteran.”

Mr. Steinberg added that the government reminded him of a bully “who picks on, if you will, the person who he perceives to be the weakest, and then when the weakest hits him back he runs to the teacher.”

Judge Torres warned that she expected the parties to abide by the local rules governing what may be said publicly without interfering with a fair trial. If necessary, she suggested, she would hold a hearing on the matter.

A Playlist of Your Favorite Cover Songs

Kamala Harris Changes the Race While Trump Tells on Himself

Why the U.S. Hasn’t Contained Covid-19