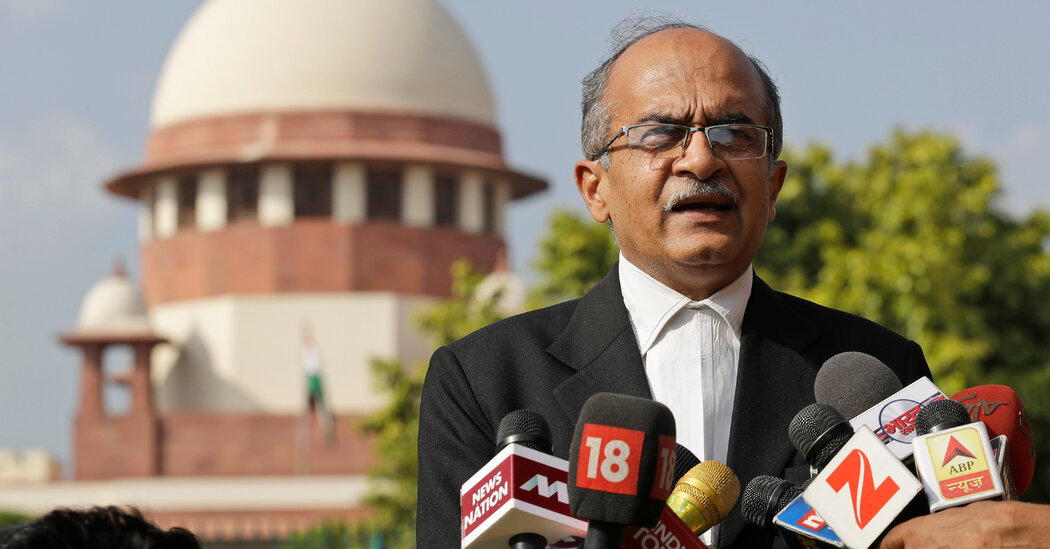 NEW DELHI — India’s Supreme Court on Monday handed down a symbolic sentence — a fine of about 1 cent — to a prominent lawyer who posted tweets critical of the court and its chief justice.

The case against the lawyer, Prashant Bhushan, effectively put India’s highest court on trial, with many lawyers and activists claiming that the conviction alone of Mr. Bhushan was emblematic of the court’s eroding independence and relevance.

Mr. Bhushan faced a maximum sentence of six months in prison for the tweets, which included a photograph of the chief justice astride a Harley-Davidson motorcycle owned by a political ally of the country’s powerful prime minister.

Rights activists feared that a jail term for the outspoken gadfly would quash free speech in the world’s largest democracy and signal a further slip toward authoritarianism.

On Monday, the court told Mr. Bhushan that if he failed to pay the 1 rupee fine he would face three months in jail and lose the right to practice law.

Had the court sentenced Mr. Bhushan to prison, lawyers said it would have been seen as a clear sign of the court’s turn from independent arbiter to political tool.

Lalit Bhasin, the president of the Bar Association of India, an umbrella organization that represents thousands of lawyers, called the fine “unfortunate.”

“You can’t scuttle freedom of expression,” he added.

In June, Mr. Bhushan posted a one-sentence tweet opining about the Indian Supreme Court’s role in eroding freedoms in the country since Prime Minister Narendra Modi took office in 2014. Two days later, he tweeted a photo of the court’s chief justice atop a luxury motorcycle.

Mr. Bhushan had earlier refused to offer the court an apology, saying in a statement that a false expression of regret “would amount to the contempt of my conscience.” At a hearing last week, Mr. Bhushan was repeatedly goaded by the court to issue an apology in an effort to gain the court’s clemency, an action Mr. Bhushan’s lawyers described as an “exercise of coercion.”

Though the two tweets consisted just 478 characters, the court issued a 108-page judgment that found Mr. Bhushan in contempt of court. It said that Mr. Bhushan’s tweets were “scurrilous” and “malicious,” and a “calculated attack on the very foundation of the institution of the judiciary.”

In one of the two tweets he posted, Mr. Bhushan wrote that the court played a role in “how democracy has been destroyed in India” during Mr. Modi’s time in office.

India’s Supreme Court has long been seen as a pillar in the country’s often unruly democracy. It has recently made a series of progressive rulings, including striking down a ban on consensual gay sex and upholding the right to privacy.

Freedom of speech is a fundamental right in India and the court has historically protected contentious speech. In 2015, it repealed a law that stood in the way of freely expressing one’s views on the internet.

But the conviction alone of Mr. Bhushan appeared to reflect a shift in the court’s definition of what amounts to legally protected criticism, experts said.

“Conviction of Prashant Bhushan and sentencing are both unwarranted because he has done nothing which is in contempt of court,” said Colin Gonsalves, a senior lawyer and founder of Human Rights Law Network, a nonprofit that provides pro bono legal services. “Rather his actions have always been his support of independence of the judiciary and against corruption.”

Critics of the court further say that since Mr. Modi’s rise to power, the bench has increasingly become a tool of the prime minister.

In a speech earlier this month, A.P. Shah, a former chief justice of the Delhi High Court, said that the Supreme Court appeared to have “abdicated its role as arbiter,” when it deferred the matter regarding lifting restrictions on the internet and movement in the contested Jammu and Kashmir region, to a government-run committee.

“India is moving toward a form of elected autocracy,” said Mr. Shah.

The court also handed Mr. Modi a series of recent political victories. In November, the court ruled in favor of Hindus in a decades-old dispute over a holy site in Ayodhya contested by Muslims, handing Mr. Modi and his followers a victory in their quest to recast the secular democracy as a Hindu nation.

Mr. Bhushan made a career of taking on the government well before Mr. Modi and his Hindu nationalist Bharatiya Janata Party came to power. He filed several corruption complaints under previous governments, including those led by Mr. Modi’s opposition, the Indian National Congress.

But in recent years, he has become one of the Modi administration’s harshest critics. Mr. Bhushan has filed public interest suits accusing Mr. Modi’s government of wrongdoing, and has frequently spoken out about a Supreme Court, which in his estimation, too often sides with the government.

In another tweet, Mr. Bhushan accused Chief Justice Sharad Arvind Bobde of hypocrisy, and posted a photograph of the judge posing on a $67,000 Harley-Davidson motorcycle without a face mask and surrounded by people at a time the country had imposed restrictions to tame the coronavirus pandemic.

Chief Justice Bobde, Mr. Bhushan said, was flouting health rules even though he had placed the court on lockdown “denying citizens their fundamental right to access justice.”

The court said in its judgment that even though physical hearings remain suspended, it has conducted 879 hearings in nearly four months.

The motorcycle was confirmed to belong to the son of a local leader from Mr. Modi’s party in the city of Nagpur.

In convicting Mr. Bhushan earlier this month, the court said in its ruling that his comments were a “calculated attack on the very foundation of the institution of the judiciary.”

In July, Twitter removed both of Mr. Bhushan’s tweets from view in India and activists said the company set a dangerous precedent that could apply to similar future accusations of defamation. In a statement, Twitter said it was committed to protecting free expression in India and around the world.

2020 Election Live Updates: Trump Floats Whether to ‘Delay the Election,’ Something He Cannot...

UEFA Champions League Will Return in August in Portugal