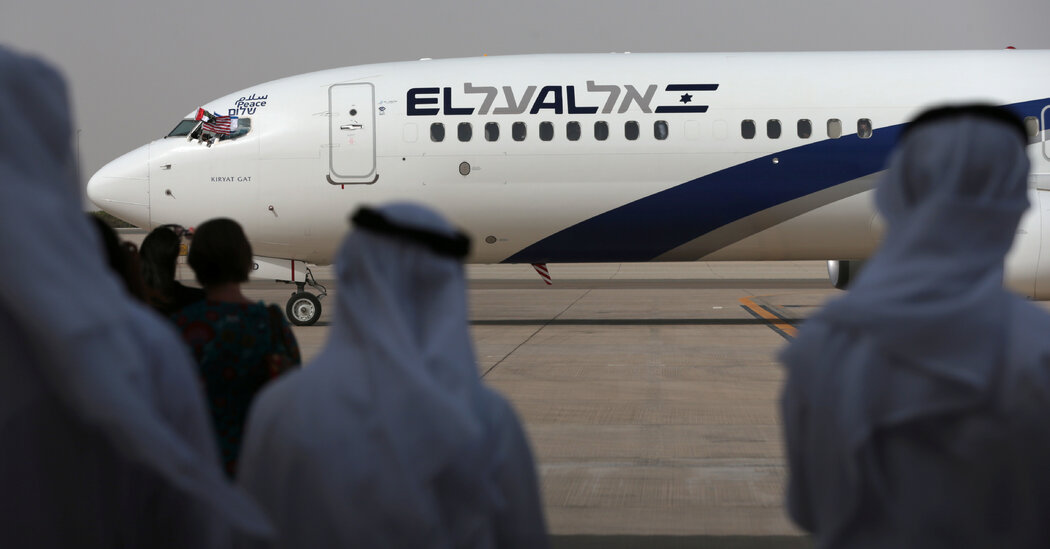 JERUSALEM — A chartered El Al airliner carrying Israeli and American diplomats landed in the United Arab Emirates at 3:38 p.m. local time on Monday, completing a symbolic first direct flight from Tel Aviv to Abu Dhabi that officials said would pave the way for formal diplomatic and commercial ties and might inspire other Arab nations to follow suit in normalizing relations with the Jewish state.

The Israeli and American delegations, led by Jared Kushner for the Trump administration and Israel’s national security adviser, Meir Ben Shabbat, arrived in Abu Dhabi for a day and a half of what were billed as “professional” meetings with Emirati counterparts on matters including health, commerce and security.

But the substance of those meetings seemed secondary, and not a close second, to the spectacle of the Israeli-marked El Al jet on the tarmac in Abu Dhabi. The plane flew the flags of all three nations and with “peace” newly stenciled above the pilot’s side window in English, Hebrew and Arabic, providing the backdrop as a coterie of Israeli diplomats descended onto an Emirati red carpet, with Emirati television broadcasting the pageantry live.

Driving home the point, Mr. Ben Shabbat, a religious Jew who wears a kippa, spoke in fluent Arabic. “I’m proud and very happy to be here as the head of the Israeli delegation,” he said. “We came here to transform the vision into a reality. There are no limits to the cooperation that we can develop in the fields of science, innovation, tourism, aviation, agriculture, energy and many other areas.”

Before leaving Israel, Mr. Kushner told reporters that he had prayed on Sunday at the Western Wall in Jerusalem “that Muslims and Arabs from throughout the world will be watching this flight, recognizing that we are all children of God and that the future does not have to be predetermined by the past.”

“While this is a historic flight, we hope that this will start an even more historic journey for the Middle East and beyond,” said Mr. Kushner, a senior White House adviser.

The 3 hour 20 minute flight from Ben-Gurion Airport — given the flight number LY971, a nod to the Emirati country code — marked another important first: About half an hour in, the pilot announced that the plane had entered Saudi airspace with Riyadh’s explicit permission. While Saudi Arabia has allowed Air India jetliners to use its airspace to reach Israel, until now it had refused to allow Israeli commercial jets to transit its skies.

Avoiding Saudi airspace would have meant about a seven-hour flight, said the captain, Tal Becker, who was given the honor of making history as El Al’s most senior pilot.

Though the trip was to the Emirates, the message being sent by both Israeli and American officials was very much aimed at the Palestinians.

At a meeting Sunday with Mr. Kushner and the U.S. national security adviser, Robert O’Brien, Prime Minister Benjamin Netanyahu of Israel praised the deal-in-the-making with the U.A.E. as sending a message that the Palestinians could no longer hold what he called a “veto” over Israel’s efforts to gain acceptance in the region.

“As more Arab and Muslim countries join the circle of peace, the Palestinians will eventually understand that their veto has dissipated and they will be hard pressed to remain outside the community of peace,” Mr. Netanyahu said.

While Hamas, the militant group that rules in Gaza, condemned Monday’s flight, the Palestinian Authority’s prime minister, Muhammad Shtayyeh, registered objections to it more in sadness than in anger.

The El Al plane, a 737-900 equipped with a missile-defense system for the Abu Dhabi run, is named for Kiryat Gat, a city in southern Israel that was built in part on the Arab village of Fallujah, where several thousand Egyptian soldiers were surrounded in 1948 during Israel’s war for independence.

At a weekly cabinet meeting in Ramallah, Mr. Shtayyeh alluded to that history: “It deeply pains us that we are seeing an Israeli plane carrying the name Kiryat Gat — the colony that was built on the lands of al-Fallujah, where Gamal Abdel Nasser was besieged — land in the Emirates, in a clear and disgraceful violation of the Arab position on the Arab-Israeli conflict,” he said.

“We very much wanted an Emirati plane to land with its passengers in liberated Jerusalem, but we are living in the difficult Arab era,” Mr. Shtayyeh added.

‘30 Rock’ Reunion Review: A Few Laughs, a Lot of Blergh

How to Date During a Pandemic

What’s It Like to Have Kamala Harris As ‘Momala’? We Asked Her Stepkids.