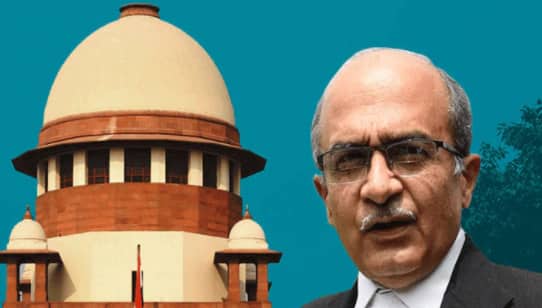 New Delhi: Senior advocate Prashant Bhushan said on Monday (August 31) that he will submit the token fine of Re 1 imposed by the Supreme Court in the contempt case for his tweets against the judiciary. He, however, indicated that he would file a review plea against the apex court order.

In a press conference, Bhushan said, “My tweets were not intended to disrespect SC but were meant to express my anguish at what I felt was deviation from its sterling record… This is a watershed moment for freedom of speech and seems to have encouraged many ppl to speak out against injustices.”

The activist lawyer said that he has the greatest respect for the judiciary and the tweets were not intended to disrespect the apex court or the judiciary, adding “I reserve my right to file review, I propose to submit and pay fine as directed by the court.”

Earlier in the day, the Supreme Court imposed a token fine of Re 1 against activist-lawyer Prashant Bhushan in the contempt case for his tweets against the judiciary.

The SC bench headed by Justice Arun Mishra asked Bhushan to deposit the fine by September 15, failing which he will attract a jail term of three months and debarment from law practice for three years.

Freedom of speech cannot be curtailed but rights of others need to be respected, said the bench, also comprising Justices B R Gavai and Krishna Murari.

The verdict said not only the bench had persuaded Bhushan to express regret but Attorney General K K Venugopal had also opined that it was in the fitness of thing that the contemnor should express regret.

Former Union Law Minister M Veerappa Moily today said that punishing activist-lawyer Prashant Bhushan was unwarranted, and felt that the case against him could have been referred to the Bar Council of India.

The senior Congress leader said that Attorney General K K Venugopal and many jurists and lawyers had urged the Supreme Court not to punish him.

On August 14, the apex court held Bhushan guilty of criminal contempt for his two derogatory tweets against the judiciary and said they cannot be said to be a fair criticism of the functioning of the judiciary made in the public interest.

Republic Day 2021: From no chief guest this year to parade timings and venue, here are all the details

In Poland, the Rainbow Flag Is Wrapped Up in a Broader Culture War

Coronavirus Face Shields vs. Face Masks: Which Is Better?

A Poet of Multitudes, Whose Work Feels Newly Pertinent

Republic Day 2021: From no chief guest this year to parade...