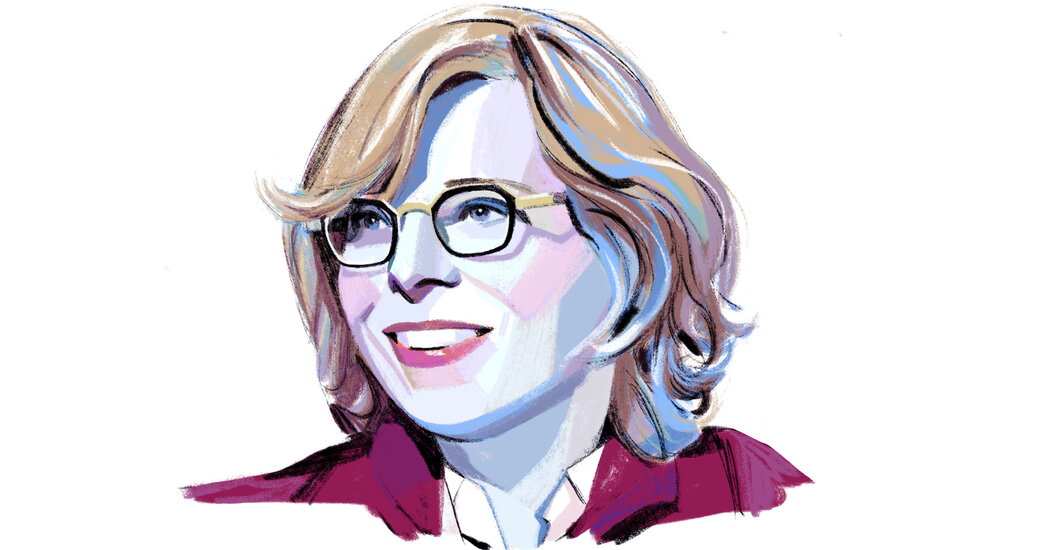 The historian, whose new book is “If Then,” got a hand-me-down copy of “Little Women” from her mother. “I actually can’t stand that book — the story, I mean. But I love the physical book, the cover, the smell, the welt on the spine, and that it was my mother’s. It still has a yellow hair ribbon of mine in it that I used as a bookmark. I never finished it.”

What books are on your night stand?

Olga Tokarczuk, “Primeval and Other Times”; Zadie Smith, “Intimations: Six Essays.” And, for essays I’ve written in the last few months, I’ve got stacks of books on pandemics and loneliness and policing and race relations commissions and Kent State and the history of democracy. But during the plague, honestly, I have mainly been listening to audiobooks. Raymond Chandler’s stories as radio drama. The Audible edition of “World War Z.” Pulp. I’ve been working on a podcast for the last year and trying to learn everything I can learn about that form of storytelling, as a matter of history, so, if I’m out walking, I listen. Though, to be fair, this started a long time ago when someone gave me an iShuffle or whatever that thing was called, that thing you wore around your neck on a lanyard, and I was teaching “Tristram Shandy” that semester so I ordered the audiobook and then, by mistake, I listened to the whole thing on shuffle play. Without realizing it. Only later did I come to understand this is what Sterne wanted! In 1767!

“Blindness,” by José Saramago. I read it for a New Yorker essay I was writing on novels involving plagues. “Achingly beautiful” is a cliché, but it ached and it was beautiful. Since then, during what really does feel like an epidemic of blindness, it keeps haunting me, stalking me.

Are there any classics that you only recently read for the first time?

I only fairly recently read the Updike “Rabbit” books. Also: Dante, a few years ago, for a class.

What’s your favorite book no one else has heard of?

A novel one of my sons wrote for that National Write a Novel in a Month challenge when he was in sixth grade. Magical realism, about a man found dead in a treehouse. So great.

What do you read when you’re working on a book? And what kind of reading do you avoid while writing?

I read stuff written in the period I’m writing about. I also only watch films made in the period I’m writing about. I like immersion. While I was writing “If Then,” whose story runs from 1952 to 1970, I read a lot of late Cold War American political writing, James Baldwin, Eldridge Cleaver, Norman Mailer, Joan Didion, Claude Brown, Arthur Schlesinger, Jr., Gore Vidal, Malcolm X, Theodore H. White. And Vietnam war reporting: Frances FitzGerald, Ward Just, Neil Sheehan. I also read a lot of 1950s and 1960s political thrillers. Graham Greene, John le Carré, that sort of thing. Len Deighton! And watched the Harry Palmer/Michael Caine movies. Any excuse to watch something.

Also, you didn’t ask this, but most of what I’m reading at any given time is stuff I’m reading not for writing but for teaching. Which is different. Reading for teaching is a little like eating a meal and trying, afterward, to write up a recipe for every dish.

What’s the most interesting thing you learned from a book recently?

There’s a line in Eddie Glaude’s brilliant new book about James Baldwin where he quotes Baldwin, in an unpublished draft of an essay, talking about how the 20th century “begins with the smashing of the clock … and reaches its terrifying climacteric with the smashing of the atom.” I love that. The 20th century: the atrocities, the techno-swagger. Do people other than historians have most and least favorite centuries? I don’t know. Anyway, I just love how that captured what most distresses me about the 20th century: the smashing.

Have you ever changed your opinion of a book based on information about the author, or anything else?

How do you organize your books?

People organize their books? At best, I might know which room in the house a book might be in.

What book might people be surprised to find on your shelves?

People could find a particular book on my shelves? I sure can never find what I’m looking for.

What’s the best book you’ve ever received as a gift?

My mother gave me her childhood copy of “Little Women” when I was maybe 6 years old. I actually can’t stand that book — the story, I mean. But I love the physical book, the cover, the smell, the welt on the spine, and that it was my mother’s. It still has a yellow hair ribbon of mine in it that I used as a bookmark. I never finished it. It drove me crazy, the daffiness of the 19th-century girl.

What kind of reader were you as a child? Which childhood books and authors stick with you most?

I read anything then. I have a very strong memory of finding three shelves’ worth of Helen MacInnes in the fiction room at my local library and reading all of those books, for no reason except that there seemed to be a lot of them and it made it easy to stop on the bike ride home from school to pick up the next one. Though I now see on Wikipedia that MacInnes once translated a book called “Sexual Life in Ancient Rome” and, since I also spent a lot of time in that library trying to find where the books about sex were hidden, it’s possible I came to her that way. A strip mall in town had a little store called Annie’s Book Swap where you could get cheap paperbacks, on trade in. That’s where I first picked up a copy of “Is Sex Necessary?” by E. B. White and James Thurber. I believe — but maybe I invented this? — that I traded in my mother’s Fannie Farmer cookbook for that book. Found Toni Morrison for the first time at Annie’s. Carl Sagan. Edith Wharton. Audre Lorde. Vine Deloria. Philip Roth. George Orwell. If it was available as a cheap paperback, it was there, and I read it, if I could afford it. There were lots of nutty popular science writers in the 1970s. Desmond Morris? Those guys. I remember reading a textbook called “Organizational Behavior.” Because I could get it by turning in “The Sun Also Rises” plus “Absalom, Absalom!”

Have your reading tastes changed over time?

Good grief, yes. I can picture the ages of my life by the poetry I was reading, at each stage. The Adrienne Rich years! I suppose that, when I was younger, I read much more contemporary fiction than I do now. Then there was a long stretch where I read mainly 18th-century fiction. I suppose then 19th-century fiction. Then there was a long decade where, like most parents, most of my reading that wasn’t for work involved reading children’s books. “Nate the Great”! Elise Broach! Day and night, Chicka-chicka-boom-boom …

Whom would you want to write your life story?

No historian can possibly wish to be the subject of a biography.