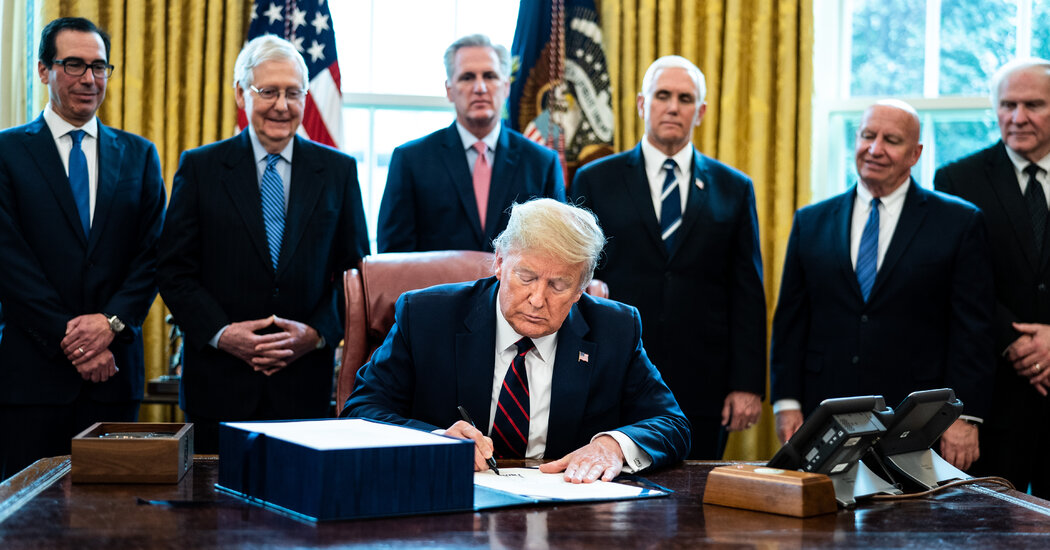 For the most part, America under Donald Trump’s leadership has offered an object lesson in how not to handle a pandemic. Delay and denial deprived us of any chance of containing the coronavirus’s early spread; impatience and further denial led to a huge second wave of infections.

As I pointed out in a previous column, a great majority of U.S. Covid-19 deaths have taken place since April 17, the day Trump tweeted out his support for demonstrators demanding that states end restrictions on high-risk activities.

And in America, uniquely among advanced nations, common-sense precautions like wearing face coverings and avoiding large indoor gatherings have become battlefields in the culture war.

Yet in one area — economic policy — America did a surprisingly good job, containing the hardship and collateral damage from the pandemic much more effectively than cynics, myself included, expected.

It’s true that employment and G.D.P. plunged, which was inevitable given the need to shutter activities that were spreading the virus. But the employment decline was concentrated in sectors like leisure and entertainment; it didn’t spread to the economy as a whole. And despite huge wage losses, poverty didn’t soar — some estimates suggest that it may even have declined slightly.

But notice the past tense. The Republican National Convention may have pretended that the pandemic was over, but the virus doesn’t agree. That effective economic response, on the other hand, is over. Trump, you might say, did one good thing this year — but now he’s stopped doing it.

And it was Trump’s own party, responding to his leadership or lack thereof, that killed the only praiseworthy aspect of his coronavirus policy.

What was unexpectedly good about the U.S. response? The Federal Reserve helped avert a financial meltdown, but that wasn’t a surprise: The Fed is a highly competent institution, and it remembers the lessons of the last economic crisis.

On the other hand, “competent” isn’t a word that comes to mind when you think about Trump officials, and the Republican belief that tax cuts for the rich solve all problems hasn’t wavered for decades.

Yet in late March Congress passed, and Trump signed, the CARES Act, a huge spending bill that in important ways was just what America needed.

But the really crucial element of the CARES Act was expanded aid to the unemployed. Benefits were expanded to people like gig workers who had previously fallen through the cracks, and everyone receiving benefits got an extra $600 a week.

This expansion of aid to the unemployed did double duty. It alleviated hardship, letting laid-off workers continue to pay rent and put food on the table. And it supported overall spending much more effectively than those stimulus checks, most of which were probably just saved.

Who deserves credit for this very good policy? A recent Times article describes Steven Mnuchin, the Treasury secretary, as the “architect” of the CARES Act and the bill as a “victory” for Trump. Actually, however, the crucial unemployment provisions were devised largely by Senator Ron Wyden, Democrat of Oregon, and the most you can say about Mnuchin and Trump is that they didn’t reject Democratic demands that these provisions be included.

That’s something, I guess.

But Republicans hated that $600 supplement, insisting — with no evidence — that it discouraged workers from taking jobs. Trump appeared to agree, and — perhaps buoyed by rising stocks — encouraged Senate Republicans to take a hard line as key provisions of the CARES Act expired. And because Republicans refused to extend crisis aid, or make a good-faith counteroffer, the supplement expired a month ago, even though we’re still down 13 million jobs from where we were in February.

And no, $300 for some workers for a few weeks doesn’t fill the hole.

It may take some time before we see the full effects of this abandonment of American workers, but it’s a good bet that we’ll see slowing growth, a surge in evictions and, in general, the kind of mass suffering we managed to avoid in the first round of the Covid-19 crisis.

In retrospect, then, the one praiseworthy feature of U.S. policy in this pandemic year appears to have been a lucky accident. Back in March, the economy and the markets were falling apart. Democrats had some good ideas about what to do, while Republicans had no ideas at all. And a panicked Trump let himself be rushed into doing something good.

If we had brought Covid-19 under control, so that we could safely reopen more of the economy, that moment of accidental good sense might have been enough. But we didn’t, and it wasn’t. Trump did one good thing in response to the pandemic — and then he and his party killed it.

Biden, Seizing on Worries of a Rushed Vaccine, Warns Trump Can’t Be Trusted

Janet Yellen Is Sworn In as Treasury Secretary

Trump, Covid and Climate Change: What He Says vs. What He Knows