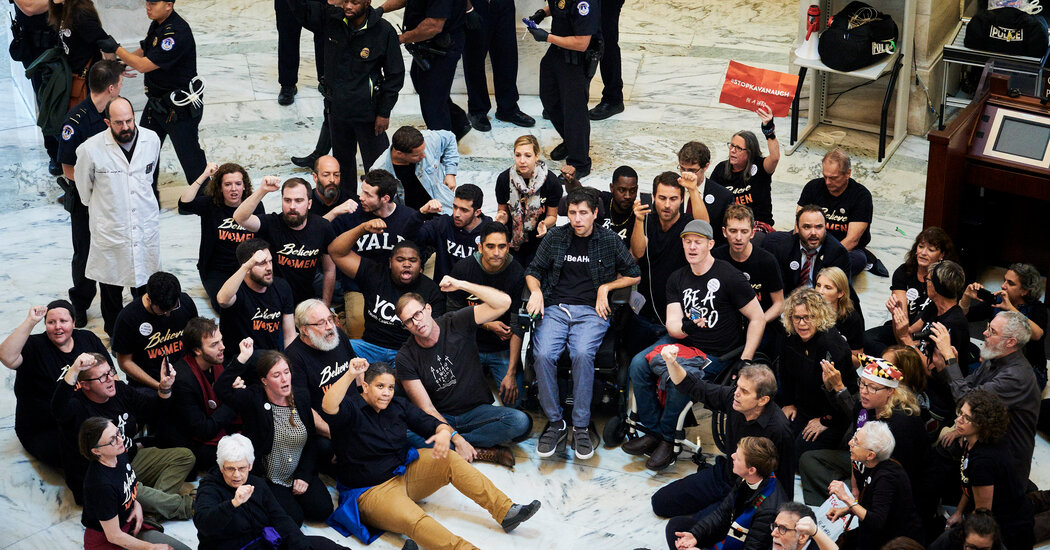 Representative Steve Scalise, the second-ranking House Republican, replaced a video that Twitter flagged as having been manipulated because the words of a progressive activist who was questioning Joseph R. Biden Jr. on his stance on defunding the police were misleadingly grafted together.

The activist, Ady Barkan, called out Mr. Scalise, the minority whip of the House of Representatives, on Twitter Sunday afternoon, saying he had “doctored my words for your own political gain” and demanding that he remove the video he had posted in a tweet.

“I have lost my ability to speak, but not my agency or my thoughts,” tweeted Mr. Barkan, who has been diagnosed with amyotrophic lateral sclerosis, or A.L.S. and speaks with the help of a computerized voice.

“You owe the entire disability community an apology.”

These are not my words.

I have lost my ability to speak, but not my agency or my thoughts.

You and your team have doctored my words for your own political gain.

President Trump’s attack on Mr. Biden’s candidacy has charged that the Democratic nominee wants to “defund the police,” a phrase that has a range of meanings — from shifting some money from policing budgets to social services to outright cutting off funding for the police. Mr. Biden has repeatedly said that he does not support calls to defund the police entirely and that while federal grants should be used to incentivize reform, decisions about local department funding should be made at a local level.

To bolster the argument being advanced by the Trump campaign, Mr. Scalise tweeted a video showing scenes of chaos and destruction. It included a clip of a question by Mr. Barkan and a response from Mr. Biden that had been edited in a way that removed context and added words that made it appear as through the former vice president was asked about police funding more directly.

The doctored video showed Mr. Barkan asking Mr. Biden: “Do we agree that we can redirect some of the funding for police?”

But originally published version of the video of the interview shows that Mr. Barkan did not say the words “for police” at the end of his question.

Earlier in the interview Mr. Barkan had argued, “We can reduce the responsibilities assigned to the police and redirect some of the funding for police into social services, mental health counseling, and affordable housing.” Mr. Biden responded by listing several police reforms he had called for. And Mr. Barkan eventually interjected: “But do we agree that we can redirect some of the funding?”

“While Joe Biden clearly said “yes,” twice, to the question of his support to redirect money away from police, we will honor the request of @AdyBarkan and remove the portion of his interview from our video,” Mr. Scalise wrote in a tweet Sunday night.

In an email Monday morning, a spokeswoman for Mr. Scalise, Lauren Fine, said his team had “condensed” Mr. Barkan’s full remarks “to the essence of what he was asking, as is common practice for clips run on TV and social media, no matter the speaker.”

In a statement, Andrew Bates, a Biden campaign spokesman, called the edited video a “deep fake” that was “particularly outrageous, and is a warning sign for other kinds of categorically dishonest manipulation.”

‘Gotham Refuses to Get Scared’: In 1918, Theaters Stayed Open