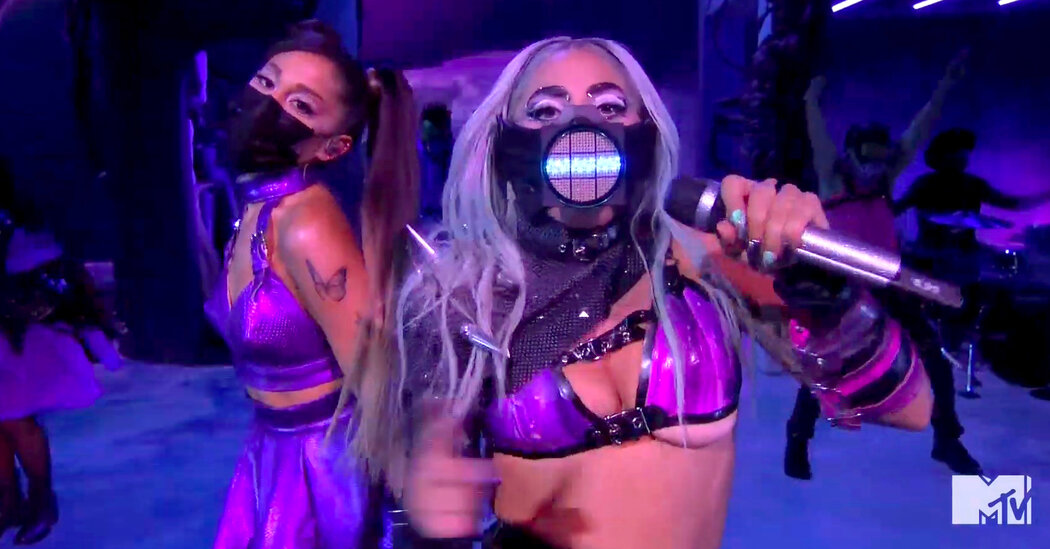 As late as this month, the 2020 MTV Video Music Awards were still scheduled to be staged in person at the Barclays Center in Brooklyn, though little to no audience was expected because of the ongoing pandemic. Instead, the network announced on Aug. 7 that outdoor performances would be “more feasible and safer than an indoor event,” scrapping the central location but forging ahead with a makeshift show.

The result, which aired Sunday night, combined disparate, green screen-heavy segments, piped-in crowd noise and soundstage performances, most of which were reportedly pretaped — many in Los Angeles, despite the New York theme — joining the BET Awards, held remotely in June, in the strange project of making a virtual collage appear like a communal celebration.

The issues of the day, from Covid-19 and police brutality to the upcoming election and the death of the actor Chadwick Boseman, were alluded to repeatedly, but did not dominate the messaging as performances from BTS, the Weeknd, DaBaby, Doja Cat and Lady Gaga attempted as much pop maximalism as they could muster. Below are some of the night’s most notable moments.

For much of their existence, the MTV Video Music Awards have seemed to operate by an unspoken rule: Give the awards to the most famous people who show up. (A locked-suitcase, PricewaterhouseCoopers-audited affair this is not.) That has become all the more obvious in recent years, as ratings decline, the show slips further from relevance, and the majority of music’s A-listers make other, less ambitious Sunday-night plans. Those household names who do deign to grace the V.M.A.s with their presence, though, tend to be handsomely rewarded with ample Moon Person awards and uncut centerpiece performance time. Think Beyoncé’s 15-minute “Lemonade” extravaganza in 2016, or Taylor Swift’s rainbow-brite “Lover” medley last year.

Or, now, Lady Gaga’s complete and total takeover of the show in 2020. Because while others Zoomed in acceptance speeches from home (was Swift in … a model-home’s walk-in closet?), the artist born Stefani Germanotta showed up. As she accepted four televised awards — the most of any artist Sunday night — she may not have been in the same place as the host Keke Palmer or any of the “Blade Runner” replicants cheering in the “audience,” but at least she was on a stage, treating the whole uncanny-valley’d charade as though it were a semi-meaningful awards show. It, like so much of what Gaga does, was strangely, even beautifully, sincere.

Gaga’s four acceptance speeches were all disarmingly earnest and involved dramatic costume changes (each look with its own couture face mask). Accepting the V.M.A. for artist of the year in a white feathery cape and sequined mask, she told a lengthy story about being wined and dined by label executives early in her career, ending with a quotable punchline: “I didn’t come here for the California roll.” It felt like a throwback to the great “there can be 100 people in a room” awards campaign of 2019. Whether it’s an Oscar, a Golden Globe, or a new V.M.A.s category seemingly tailor-made for the fact that you actually attended this year’s ceremony (last night’s “Tricon Award”), the woman certainly knows how to accept an accolade.

Where Gaga truly showed up, though, was in her ambitious nine-minute performance, a medley of songs from her latest album, “Chromatica.” She opened with the segue from an instrumental track into the robotic pop of “911” — a self-aware nod to the year’s most joyous meme — and then a face-masked-and-pigtailed Ariana Grande joined her for their thumping house duet “Rain on Me.” The performance had a bittersweet undercurrent, given that the Power-Rangers-on-MDMA sets and electro-ninja outfits conjured what Gaga’s postponed Chromatica Ball tour might have looked like, in a world where live indoor concerts still safely existed. (It’s now scheduled to begin in August 2021.) But for an energetic, bonkers and wholly cathartic nine minutes, Lady Gaga was so committed to a good old-fashioned awards-show performance that you almost forgot that it was anything less than business as usual. LINDSAY ZOLADZ

Miley Cyrus Throws It Back, in Isolation

If any pop star could be said to have home-court advantage at a late-period MTV Video Music Awards ceremony, it’s Miley Cyrus, who has consistently provided the show with moments that felt relatively vibrant and unscripted, from twerking in the vicinity of Robin Thicke in 2013 to bringing Wayne Coyne and feuding with Nicki Minaj while also hosting two years later. (In between, she pulled a Marlon Brando, sending up a young homeless man to claim her 2014 video of the year award for “Wrecking Ball.”) So take away the crowd, give every performer their own green screen and throw in a divorce for good measure, and Cyrus was left looking, well, isolated, and without an outlet for her generally benevolent chaos.

In a shaggy ’80s mullet and an oversized Madonna-esque cross necklace, Cyrus performed most of her new grown-up, Pat Benatar-y single, “Midnight Sky,” with only a microphone stand as a prop, eventually climbing a staircase to a disco ball that she could pretend was that old wrecking ball. Cyrus has done pointedly subdued at the V.M.A.s before, but this wasn’t that — she seemed to be simply gesturing toward the past because the present, let alone the future, wasn’t worth dwelling on. JOE COSCARELLI

The Weeknd had a distinctly audible and sometimes visible helicopter over his shoulder when he cold-opened the show performing “Blinding Lights” at the Edge, the pointed, cantilevered balcony jutting out from a high-rise amid the architectural shouting match of Hudson Yards. With camerawork mimicking the disorienting pace and perspectives of the video directed by Anton Tammi — the winning video of the year — and wearing the same kind of red jacket and bruised, bloody makeup, Abel Tesfaye (a.k.a the Weeknd) amped up the song’s desperate sense of isolation, pushing his croon toward a shout. The song was an appropriate on-ramp to a show infused with the anxiety of the pandemic that teetered between presence and simulation. In case the helicopter wasn’t noisy enough, fireworks — were they real? — exploded through the finale. The song is pure synth-pop, harking back to a-ha’s “Take On Me”; it also won the R&B award. JON PARELES

Advertising Drives Into the Front Row

One of the most hopeful symbols of the music industry during Covid-19 has been the drive-in concert — a socially distant adaptation meant to prop up the devastated concert business, albeit one that many insiders dismiss as an unsustainable gimmick. It took the 2020 V.M.A.s, though, to make the drive-in branded content.

Toyota’s sponsorship was inescapable during the show, and two segments, by the Colombian singer Maluma and the multinational Latin boy band CNCO, were staged as performances in front of a sea of sleek, subtly lit automobiles — perhaps all Toyotas, although in the darkness it was hard to tell. (The location was announced as being Brooklyn.)

Along with the masks on Maluma’s yellow-clad dancers, the four-wheeled audience seemed at first a recognition of how life has changed in the pandemic. But it also blurred the line between performance and sponsor. As it went on, the scene came to look less like a drive-in show than simply a promo for a tricked-out Toyota dealership. When it came time for CNCO’s performance, they took to the vehicles like actors in a commercial, mugging behind the wheels as the cameras slowly panned over vehicles so new they lacked license plates. BEN SISARIO

The seven-member K-pop superstars BTS make boy-band predecessors like the Backstreet Boys or ’N Sync look downright uncoordinated, and they do it with smiling nonchalance. They were performing “Dynamite,” their first single on their own with all of its lyrics in English; it’s a relentlessly upbeat slice of neo-disco that celebrates the joy of success, ready to “light it up like dynamite.” (As if it weren’t perky enough, it leaps up a key before the end.) There was no pretense that they were performing in New York City. Their dance routine was green-screened onto Big Apple backdrops, and at first they looked like video game avatars. But it was soon clear that they had shared an actual soundstage and re-choreographed the song with just enough references to moves fans have already learned from the video-clip version, still making all that effort look easy. PARELES

A Spotlight on Black Lives Matter

The Grammys tend to be the least politically and socially engaged of the big four awards shows, but as the host Keke Palmer made clear in her opening monologue, Black Lives Matter was on artists’ minds at the V.M.A.s this year. DaBaby danced atop a police car during a medley of his recent hits. The video for good award went to H.E.R. for “I Can’t Breathe,” a protest song the singer and guitarist released in June with a video that includes the names of victims of police violence. The Black Eyed Peas concluded their performance with the words “Wakanda forever — Black Lives Matter.” And the Weeknd used both of his acceptance speeches at the podium to send a message: “It’s really hard for me to celebrate right now and enjoy this moment, so I’m just going to say, justice for Jacob Blake, and justice for Breonna Taylor.” CARYN GANZ

The Best Movies and Shows on Hulu Right Now