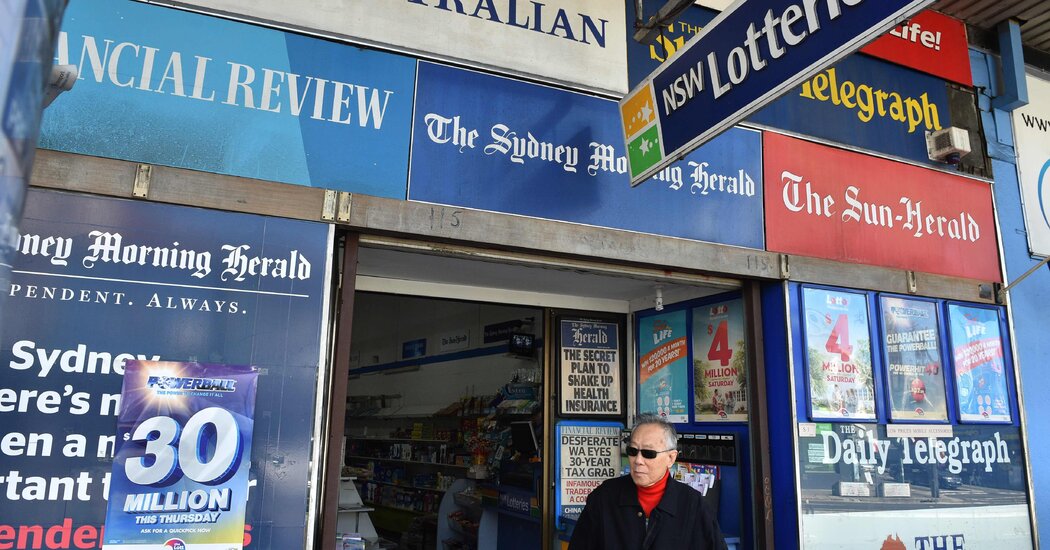 With each passing day, the World Wide Web is becoming an outdated name.

Facebook warned on Monday that it would block users and news organizations in Australia from sharing local and international news stories on its social network and Instagram if the country passed a proposed code of conduct aimed at curbing the power of Facebook and Google.

The Australian Competition and Consumer Commission, the country’s top competition authority, is drafting a bill for Parliament that would require both companies to negotiate with media publishers and pay them for content that appears on their sites.

Google also hinted that it might have to cut off its services in Australia in an open letter to users on Aug. 17. Google said the government’s draft legislation would give large media companies “special treatment” so they could make unreasonable demands that would make it difficult to keep Google search and YouTube videos free. Google, which owns YouTube, didn’t indicate how it would respond, but said its free services would be “at risk.”

The situation in Australia, while still playing out, demonstrates how government measures to diminish the influence of technology companies are creating digital fences between countries. While China has imposed restrictions on companies operating there for years, the United States has shown a recent willingness to exercise exclusionary tactics on popular services from Chinese internet companies.

The proposed changes in Australia could also contribute to the spread of disinformation, since news from legitimate news sources would be harder to find.

Over the past two months, the Trump administration has squared off against the Chinese government over the forced sale of ByteDance’s viral video app, TikTok, to an American technology company. According to President Trump, ByteDance’s ties to the Chinese government are a national security risk to the United States. The White House gave the Chinese company until Sept. 15 to divest its American assets or risk being shut down in the United States.

Facebook said publishers and users in Australia trying to share news on its site would be greeted with a notification saying they were no longer able to do so and pointing to the legislation.

“The proposed law is unprecedented in its reach and seeks to regulate every aspect of how tech companies do business with news publishers,” said Will Easton, managing director of Facebook in Australia and New Zealand, in a company blog post on Monday evening. Mr. Easton added that it would force Facebook to pay news organizations for content that the publishers voluntarily placed on its services.

Facebook signaled that it would continue to make investments in news despite the decision, including expanding its Facebook News tab — a paid partnership program dedicated to showing curated news stories inside the mobile app — to more countries and paid partners.

The company is also building more support for outside subscriptions into the product, including an account-linking feature that allows subscribers to stay logged in to their news accounts while reading articles on Facebook.

As global regulators devise different strategies to rein in technology giants, companies are facing the complicated decision of modifying their products for different markets. European competition authorities have demanded changes — and Google has complied — for how Google directs users of its Android smartphone software to its own services. Google has also agreed to concessions in its search engine in Russia at the behest of regulators.

By taking aim at Google, whose dominant search engine is the gateway for information and news, and Facebook, the largest social network with billions of users, Australia’s regulator seeks to address what it calls “power imbalances” between news publishers struggling with the collapse of traditional media and conglomerates with thriving online ad businesses.

In a call with investment analysts in August, Robert Thomson, chief executive of the media giant News Corp, said the legislation in Australia was an “inflection point” for the internet.

“I can assure you that not only regulators but media companies around the world and the digital platforms are watching Australia closely,” he said.

Facebook said that the country’s regulators did not understand the relationship between news and social media, and that publishers benefited more from Facebook than the other way around.

“We want to pay for journalism — we believe in journalism and have demonstrated that,” said Campbell Brown, vice president of global news partnerships at Facebook, in an interview. “Our plan was to make real investments in news in Australia. But this is not a workable outcome.”

Historically, Facebook has not had the strongest relationships with publishers. News organizations have bristled at its willingness to make drastic changes to its News Feed algorithm, often causing digital traffic for publishers to plunge. Attempts to bridge the divide between the two sides have been scattershot, including short-lived partnerships in paid article syndication, video content deals and livestreamed news initiatives.

Google took issue with a part of the legislation that would require the company to disclose algorithm changes to publishers in advance. The search giant said this would give media companies an unfair advantage to manipulate the search engine to vault its content higher in results. Google also objected to requirements to share information about the “collection and availability of user data.”

While Google and Facebook both said they would be willing to pay for news, there appears to be a disagreement on the true value of that content and the appropriate way to set a fair price. Both companies said they had major problems with a part of the proposal stipulating that if publishers could not agree on a price, it would be determined through arbitration.

This is not the first time a country has pushed the internet giants to pay for news. In 2014, Spain passed a law requiring publishers to charge Google for headlines of their stories appearing on Google News. The company responded by shutting down Google News from Spain and removing Spanish publishers from the service.

In a series of questions and answers on its website, Google said the Australian legislation was written much more broadly and would presumably include a loose definition of news. “We’d have to undertake a mass cull of content globally to stop them being visible to Australians,” Google wrote.

Who Gets Lifesaving Care? Tennessee Changes Rules After Federal Complaint