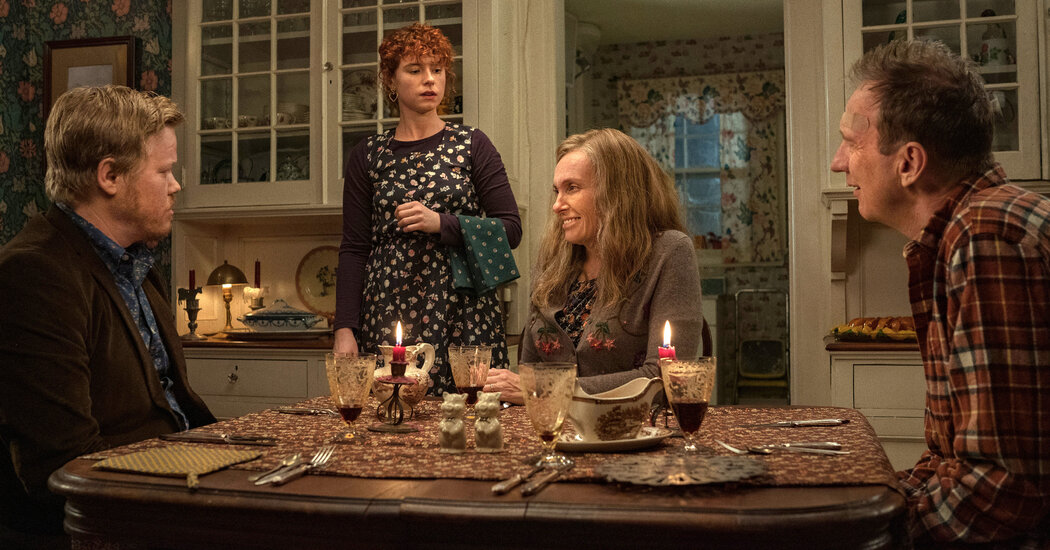 When I accepted the assignment to review Charlie Kaufman’s new movie, “I’m Thinking of Ending Things,” I vowed that I would avoid the recursive, self-conscious, Kaufmanesque flourishes that afflict so much writing about this screenwriter and filmmaker. What follows is the record of my abject failure to live up to that promise.

In my defense: He made me do it. Exercising professional due diligence — in other words, seizing an opportunity to procrastinate on deadline — I acquired a copy of “Antkind,” Kaufman’s recently published novel, only to discover that I’m a minor character in it. A few hundred pages after faintly praising me as “a nice enough fellow and I’m sure a very smart guy for a hack,” the book’s narrator (a quondam critic with nothing nice to say about Charlie Kaufman) challenges me to a barroom argument about cinema. I barely get a word in edgewise, and in the wake of his “vanquishment of A.O. Scott,” my fictional nemesis makes a bold prediction: “Never will he write again. Of that I am certain.”

I would like to think I am right this minute proving him wrong, but I’m not so sure. What is certain is that Kaufman (whom I’ve met a couple of times at film festivals) is living in my head, as I seem to be living in his. And so, whether I like it or not — and to be honest, I don’t really mind — I find myself ensnared in a low-key version of one of his favorite predicaments.

At least since “Being John Malkovich,” in which various schemers, dreamers and paying customers literally inhabit the consciousness of Malkovich, Kaufman has explored the philosophical vertigo and emotional upset caused by the inconvenient fact that other people exist. Again and again, his movies ask: Are we even real to one another, or does each of us project inner desires and anxieties outward, turning the faces and feelings of lovers, colleagues and family members into mirrors of our own narcissism?

Often — notably in “Eternal Sunshine of the Spotless Mind,” in “Anomalisa” and now in “I’m Thinking of Ending Things” — that question arises in, and threatens to spoil, a heterosexual romance. Men, in particular, have a habit of confusing the objects of their fantasies with the real women in front of them. This can be funny, creepy, sad, toxic or sweet, sometimes all at once.

In “I’m Thinking of Ending Things,” the effects arrive before our understanding of their causes. We know what we’re feeling, but we don’t know why. As far as we can guess, we are in the head of a woman named Lucy (Jessie Buckley), who is taking a car trip with her boyfriend, Jake (Jesse Plemons). “You can’t fake a thought,” Lucy muses to herself, and one of her thoughts is summed up in the movie’s title. She and Jake haven’t been dating that long, and she doesn’t see much of a future for them. Does Jake somehow know what she’s thinking? He startles her from time to time by seeming to read her mind, which seems to keep changing.

It’s not the only thing that does. As the couple makes their way through a snowstorm toward the farm where Jake’s parents live, little inconsistencies pop up, mostly about Lucy’s interests and background. One minute, she says she has no interest in poetry and the next she is reciting a heart-rending lyric she claims to have written herself. She is variously said to be studying physics, or painting, or gerontology. Her peacoat is pink, until it is blue. Her name might not even be Lucy.

Once she and Jake are out of the car, the weirdness accelerates. Jake’s mother and father (Toni Collette and David Thewlis) grow older and younger each time they leave the room. Their awkward, high-strung table talk is interrupted from time to time by scenes of an old, lonely school custodian making his rounds, a character whose connection to Jake and his family is implied but not spelled out.

Until the end, that is, but even then maybe not quite. “I’m Thinking of Ending Things” is based on a novel by the Canadian writer Iain Reid, a spare and elusive story that provides Kaufman with a stable enough trellis for his own florid preoccupations. The film is suspenseful because it generates uncertainty about its own premises, and because the movements of the camera, the strangeness of Molly Hughes’s production design and the tremors of Jay Wadley’s musical score guide the viewer toward dread. Lucy is often puzzled, sometimes curious, but maybe not as afraid as she should be. Unless, that is, her perspective isn’t one we should trust. Maybe she is faking her thoughts.

Or at least borrowing them. Kaufman’s dialogue is larded with passages that sound like quotations, only a few of them attributed. Jake helpfully — or pompously — informs Lucy when he’s quoting Oscar Wilde or David Foster Wallace. But at other moments, you may find yourself tempted to pause the movie (which is streaming on Netflix) so you can Google what you just heard, thus discovering (for example) that Lucy’s lengthy, wised-up critique of John Cassavetes’s “A Woman Under the Influence” is lifted verbatim from Pauline Kael’s review of that movie. A visual clue of sorts has been provided by the appearance in an earlier scene of a copy of Kael’s collection “For Keeps.” The weird thing is that the “Woman Under the Influence” review doesn’t appear in the book.

An annotated version of “I’m Thinking of Ending Things” might be nice to have, though it might also undermine the sense of knowingness that is both one of the film’s minor pleasures and one of its major provocations. Jake, who is defensive about David Foster Wallace and oblivious to the rapeyness of the song “Baby It’s Cold Outside,” is a guy with a clear need to know, explain and control things.

He’s proud of how smart he is, though also a little ashamed that he won a medal in school for “diligence” rather than “acumen.” (His mother couldn’t be prouder.) When Lucy makes an offhand reference to Mussolini making the trains run on time, Jake is quick to point out that improvements in Italian rail service actually predated the fascist dictatorship. His behavior toward her — his moodiness, his evasive answers to her questions, his passive-aggressive efforts to shut her down — is increasingly alarming, even as it is also the most consistently realistic aspect of the film.

Much of the second half takes place against the backdrop of a howling nighttime blizzard, an almost too-perfect metaphor. “Anomalisa” partly camouflaged its melancholy cynicism in the absurdist whimsy of R-rated stop-motion animation. “I’m Thinking of Ending Things” has some of its own flights of inventiveness and fantasy — a ballet sequence, a satirical poke at Robert Zemeckis, a couple of songs from “Oklahoma,” a curious homage to “A Beautiful Mind”— but they always land in the same dark and lonely place.

That place is at once vividly cinematic — this is Kaufman’s most assured and daring work so far as a director — and deeply suspicious of the power of movies to infect our minds with meretricious and misleading ideas. Both Jake and Lucy at times share this suspicion, and both of them can be seen as victims of the art form that has summoned them into being. Plemons and especially Buckley play this somewhat abstract conundrum for real existential stakes, either tricking you into caring about them or sincerely expressing the need to be cared about.

I was sometimes puzzled and sometimes annoyed by their story, and by the other possible stories in which they are embedded, but I was also moved. More evidence that I’m a hack, for sure, but who am I to argue?

After a Hospital Stay for Covid, Many Face Months of Rehabilitation

Watch live: Members of Congress and others pay their respects in Statuary Hall.