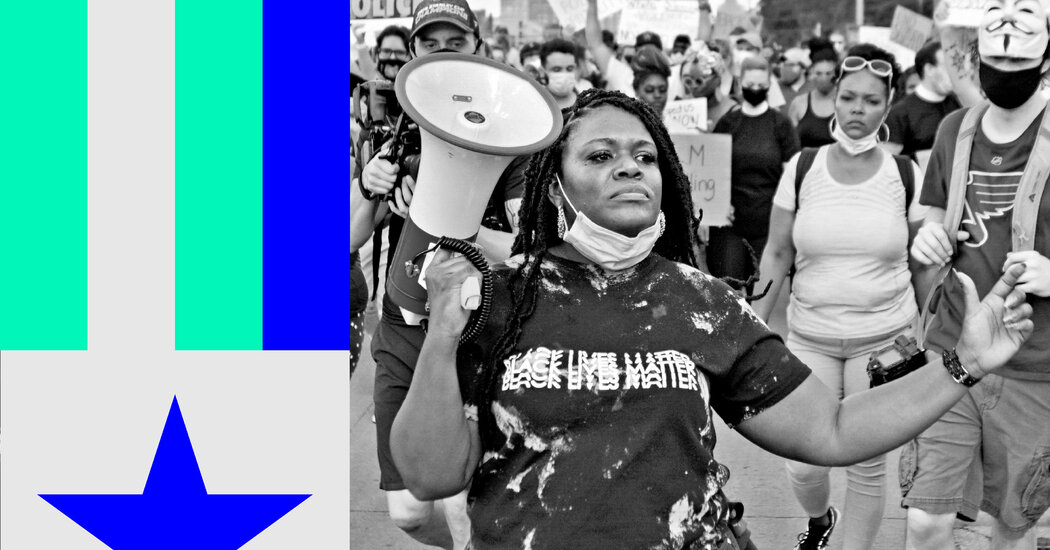 I led the planning team for the Black National Convention on Friday, and in the lead-up I was constantly asked for a list of familiar faces. People also pestered me with questions like: “Who is this against?” “What does the Democratic Party think about this?” “How much will you talk about Donald Trump?” People are often uncomfortable that the Movement for Black Lives, an umbrella organization of 150 Black-led groups, doesn’t answer to one leader, nor is it fighting for a single issue or type of person.

Instead, the convention, and our politics more broadly, put ordinary people in the foreground. Sanitation workers on strike in New Orleans. Mothers occupying vacant houses for 50 days in Oakland, Calif. We put at the center of our politics the voices and leadership of people whose appeals for justice are most likely to be ignored by the state — Black queer and trans people, people who were formerly incarcerated, sex workers, disabled people and people who have been made poor by violent and oppressive systems.

Why do we do this? Because the previous processes we used — engaging in elections in service of only the party or the person on the ballot — have not produced the outcomes we wanted. Black people are dying, from health care inequity, from criminalization and violent policing, from intra-community violence and from the climate crisis. And for Black voters, the feeling of being used without being listened to is pronounced. According to a 2019 survey by the Black Census Project, 52 percent of respondents agreed with the statement “politicians do not care about Black people.” In listening sessions with young Black voters in swing states, they told us they were reluctant to cast ballots because their grandparents and parents did it religiously while receiving little to nothing in return.

I have worked on campaigns in 43 states, trained hundreds of Black candidates and helped progressive Black women like Stacey Abrams and Tishaura Jones, the treasurer of St. Louis, run for office. In 2016, a collective of activists who use elections as a tool for social change, including Rukia Lumumba and Kayla Reed, came together to look very carefully at the political landscape. We knew that for more of us to participate in elections, we would need more than new faces. We needed a new process. After the election cycle that year, when headlines largely dismissed Black protesters as unwilling to engage in electoral politics and insinuated that the protest movement was partly responsible for the election of Donald Trump, we formed the Electoral Justice Project in the Movement for Black Lives to try to figure out how elections could be a meaningful tool for the movement.

The solution, as we see it, is not in traditional party politics, which asks us to hold our nose when we cast a ballot or to dilute policy solutions like Medicare for All. Parties want our votes while promising little and delivering less. That is because the electoral system was designed as binary; the entry points are two doors expected to fit the voices and policy needs of hundreds of millions of multiracial constituents.

Instead, for a new generation of Black activists, success lies in the process of making change — in politics, policies and social practices. On the campaign trail, we hire managers and organizers who have experiences in common with their communities. We design field plans with an eye to year-round engagement rather than a monthlong, extractive Get Out the Vote program. When we write campaign plans, we think about mutual aid and long-term governance. We want communications staff members who are interested in inspiring and educating voters, not engaging in the politics of fear. The ultimate goal of the ballot is to build and sustain coalitions of community members who can have a say in governance. We work to avoid what the political scientist Paul Frymer calls “electoral capture” — the Democratic Party’s habitual disregard for Black people’s political interests despite the fact that they are the party’s most loyal constituency and have no other reasonable alternative for representation.

You can see the results of this new process in the election of activists like Representative Ayanna Pressley of Massachusetts, as well as the successes of Cori Bush of Missouri and Jamaal Bowman of New York, both of whom won competitive congressional primary races this year. You can also see its results in the closure of the Workhouse jail in St. Louis by a coalition of grass roots organizations, the approval of reparations by the Asheville City Council in North Carolina for historical harms and the organizing around Senate Bill 2123 in Mississippi that would have accelerated the parole process for incarcerated elders. (Although the Mississippi governor vetoed that bill, its passage in the Senate was a major victory for organizers.)

The call to defund the police is not separate from the organizing mentioned above. It also helps to shift political terrain at the ballot box. Defunding was absent from mainstream political discourse even three months ago. By August, at least 11 cities had taken steps toward divesting from policing and reinvesting in Black and poor communities. Some, like Minneapolis, moved to dismantle their police departments. Black activists worked to organize people to reimagine public safety and transform the ways that communities provide it.

The ultimate goal of a new Black politics is co-governance where elected leaders are not the destination but the vehicle to full civic participation. Co-governance requires more than representational politics; it requires elected leaders who are responsive to their constituents’ voices by creating transparency and real engagement. This way of doing politics is essential for reinvigorating democracy, given the decreasing levels of trust in government and our elected leaders’ inability to solve the most critical problems affecting ordinary people’s lives. It’s also about bringing people’s lives to a place of full participation and equal treatment.

That’s why we also drafted the Breathe Act, a 21st-century Civil Rights Act, amid global protests and in a political climate where 74 percent of Americans believe that police violence against the public is a problem. It would reduce federal funding for the police and incentivize state and local governments to seek alternatives to public safety. It also provides for several new grant programs for education, the environment, families and economic justice. The programs would encourage states to fund schools equally, address homelessness, expand Medicaid without work requirements and establish job programs that target the most economically disadvantaged.

The activist Charlene Carruthers gave voice to this new theory of Black politics in 2016 when she told a reporter: “We don’t need more elected officials that are just Black. We have Black people on the City Council. We need champions in the city.” So did Mr. Bowman, when he told The Times last month, “Every brother ain’t a brother,” borrowing a line from the rapper Chuck D. “It’s not just about being a member of the Congressional Black Caucus, but standing up and fighting for your people.”

We don’t just want our candidates to prevail on Election Day or for the public to agree with our demands. We also want to build the collective political will to extinguish injustice and expand our ability to win in the long term. At the convention, one of the workers on strike in New Orleans said his family had never respected him as much as it does now. He added, “I never expected to be on strike with 14 strong brothers.” These are our leaders.

Jessica Byrd (@JessicaLBYRD) is the founding partner of Three Point Strategies, a political consulting firm, and a co-organizer of the Electoral Justice Project of the Movement for Black Lives, a national network of more than 150 leaders and organizations.

Loyal to Trump for Years, Manufacturing Group Now Calls for His Removal

From Daily Distortions: No, the Coronavirus Is Not Like the Flu