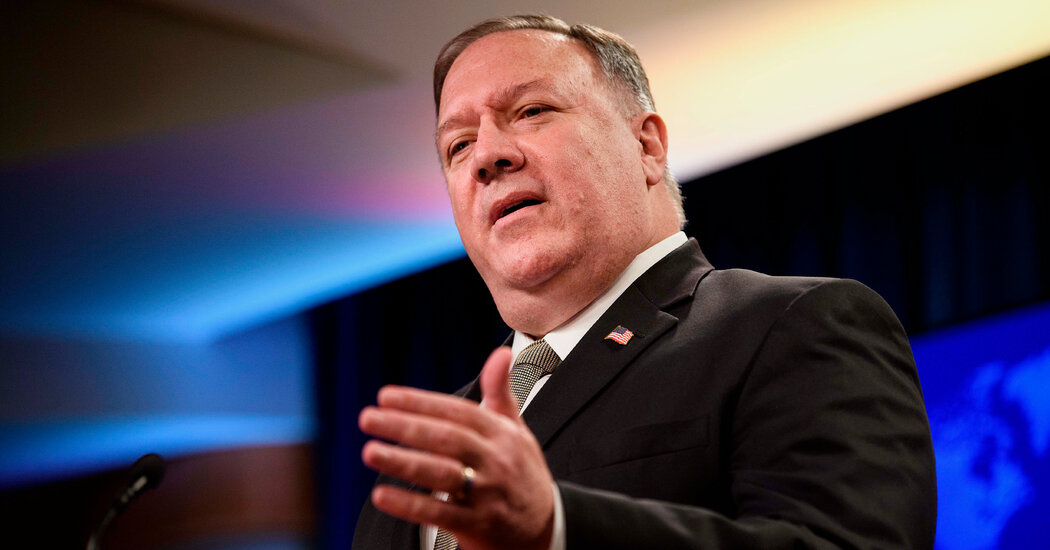 WASHINGTON — Announcing new limits on Chinese diplomats in the United States and expanded sanctions against international prosecutors, the Trump administration took a series of unilateral steps against its adversaries on Wednesday under the guise of strengthening multilateral cooperation around the world.

Already embroiled in a dispute with the United Nations Security Council over imposing penalties against Iran, Secretary of State Mike Pompeo used a news media briefing to lash out at other global organizations that have opposed American policies.

He also rejected a multilateral plan to develop and distribute a coronavirus vaccine, as led by the World Health Organization, which he accused of being ineffective and politically pliable.

“The Trump administration wants multilateral institutions to function, to actually work,” Mr. Pompeo told reporters at the State Department. “But multilateralism just for the sake of it, just to get together in the room and chat, doesn’t add value.”

In his comments, Mr. Pompeo chose a strident tone that embodied President Trump’s doctrine of “America First” just as the presidential election campaign moves into its final weeks.

“What he is saying is that international institutions are only useful if they serve as an instrument of the U.S. government,” said Vali Nasr, a former American diplomat and international affairs professor at Johns Hopkins University.

Mr. Pompeo described the International Criminal Court as “a thoroughly broken and corrupted institution” as he expanded economic and travel penalties against its chief prosecutor and one of her top aides.

The court has accused Americans of committing war crimes in Afghanistan, and the sweeping sanctions to freeze the financial assets of the chief prosecutor, Fatou Bensouda, and a senior court attorney, Phakiso Mochochoko, could be applied to others who assist them, Mr. Pompeo said. The administration could also bar other court officials from entering the United States, as Ms. Bensouda was last year when American officials revoked her visa.

The sanctions prompted an immediate protest from legal experts and human rights advocates. The United Nations spokesman, Stéphane Dujarric, said Secretary General António Guterres noted the penalties “with concern.” The United States is not a party to the court but is obligated to allow the court’s officials to visit the United Nations headquarters in New York.

Announcing new limits on Chinese diplomats in the United States, Mr. Pompeo said he would be meeting next week with foreign ministers from the Association of Southeast Asian Nations, where he would promote tit-for-tat policies to counter Beijing’s aggressions.

“From the Taiwan Strait to the Himalayas and beyond, the Chinese Communist Party is engaged in a clear and intensifying pattern of bullying its neighbors,” Mr. Pompeo said.

He said Chinese diplomats would no longer be allowed to visit American universities, meet local government officials in the United States or hold off-site cultural events with more than 50 people without the State Department’s approval. Mr. Pompeo called it a reciprocal response to limits that Beijing imposed on American diplomats in China.

It marked the latest escalation of retaliation between the two countries, which has included banning journalists, limiting official travel and shuttering consulates. Mr. Pompeo also urged universities to go a step further by disclosing and, in some cases, divesting from Chinese investments in endowment funds.

As for the World Health Organization’s efforts to fight the pandemic, Mr. Pompeo said the United States would work only “in a way that’s effective, that’s not political, that is science-based.”

“And what we have seen demonstrated from the World Health Organization is that it is not that,” he said.

As a result, the United States will not be among at least 172 countries that plan to partner in the development and distribution of a coronavirus vaccine. Instead, the Trump administration has begun working independently with health organizations that are also part of the World Health Organization effort, including a $1.6 billion commitment to Gavi, the Vaccine Alliance.

So far, the United States has committed to spend $20.5 billion on global coronavirus response efforts, including vaccines, according to the State Department.

Mr. Pompeo’s ultimatum diplomacy comes against a looming Sept. 20 deadline for the United States and other nations on the Security Council to reconcile over imposing international sanctions against Iran.

Even European allies, who are trying to preserve a 2015 nuclear accord with Tehran, have said the sanctions will not be enforced. But the Trump administration insists it can — and will — unilaterally set off the international penalties since much of the world’s economy flows through American financial institutions.

Mr. Nasr said the refusal to compromise risks destroying multilateral organizations that have partnered with the United States for generations.

That may be just what Mr. Pompeo wants.

N.F.L. Season Kicks Off With Protests

With Adult Children Home, Now’s the Time: Talk About Your Money