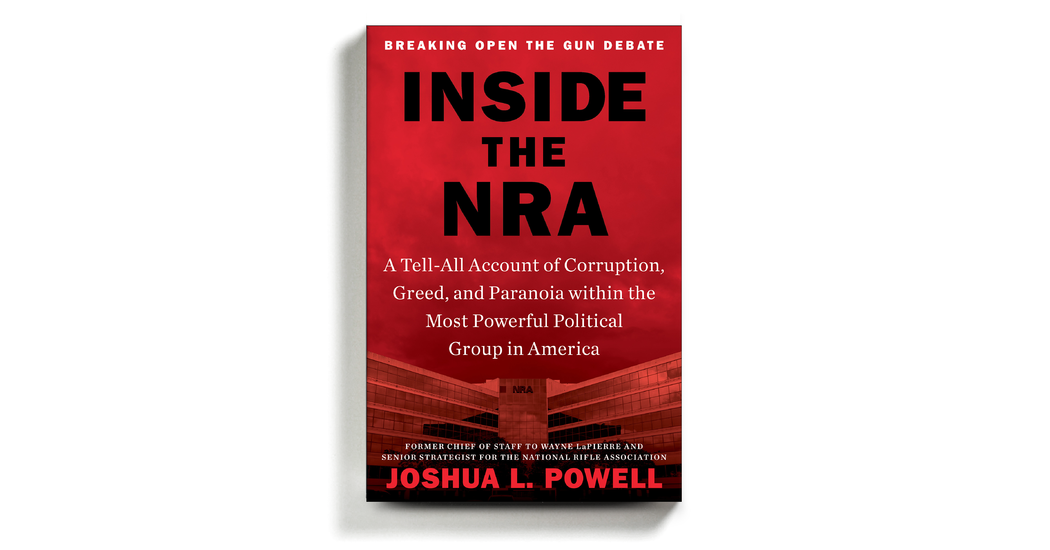 This is a sad book, and a bad one, and you shouldn’t buy it. The thinking in it is poor; the writing is worse. The author “exposes” evils that, if you’ve been paying even scant attention, you already know. Expect it soon in a Walmart remainder bin near you.

To summarize my argument thus far: No.

Joshua L. Powell, the author of “Inside the NRA: A Tell-All Account of Corruption, Greed, and Paranoia Within the Most Powerful Political Group in America,” is a former Chicago options and derivatives trader. He met his hero Wayne LaPierre, the sunny rhetorician and National Rifle Association chief executive, on a duck-hunting trip.

Powell joined the N.R.A.’s board of directors. A couple of years later, LaPierre asked him to become his chief of staff. Powell writes: “It was like having Vince Lombardi say, Hey, do you want to come help me coach the Packers?”

Powell looked the part; in photographs, he resembles the urbane bad guy in a Nordic thriller. He became the N.R.A.’s senior strategist, the second in command. He presided there from 2016 until he was pushed out early this year.

For a time, Powell loved it all — the cigars, the steakhouses, the rooms at the Ritz, the Pol Roger Champagne, the flags and the eagles, the crushing of libtards, the “oddly intoxicating” adrenaline spikes on school-shooting days and the war-room strategizing in their wake.

He liked “freedom,” including the ability to open-carry his sidearm in the office. Maybe someone would make his day. He had thoughts of succeeding LaPierre, who is 70, as chief executive.

The administrative warfare inside the organization was intense. Powell began to lose some battles, and felt marginalized. He began to see — in the way a writer will notice, when his or her work isn’t going well, that the literary world is broken — everything that was wrong with the N.R.A.

Powell’s apostasy is the primary news here. He comes out in favor of minor forms of gun control, things like background checks and so-called red flag laws and the closing of loopholes around gun show sales. This counts as fearless speech only in the paranoid and steroidal world of the N.R.A., which brooks zero dissent.

In “Hell’s Angels,” Hunter S. Thompson described the motorcycle gang’s “total retaliation ethic.” Asked to leave a bar, they’d burn it down. The N.R.A. has a similar ethic when it comes to dealing with politicians, or anyone else, who disagree with them even on minutiae.

The bulk of this book describes waste and mismanagement. LaPierre is compared to an absent-minded professor and, in the sense that there’s no there there, the Wizard of Oz.

“The national media thought we were this deep, dark, powerful lobbying machine, high-tech and streamlined, with tentacles everywhere,” Powell writes.

“I had to laugh. It was more like a tuned-out guy sitting in a room full of other tuned-out guys, saying, I think I’ll put this up on Facebook today. Totally random, with zero coordination, zero analysis, much less a sophisticated tactical approach.”

Powell attacks LaPierre’s extremist language, not always because he disagrees with it (he did little to rein it in) but because it’s a bad look. He bemoans the N.R.A.’s corruption, its grifter culture, in which he appears to have taken part.

Before he was fired he was accused of improperly charging some $58,000 in personal expenses to the nonprofit organization. He’s also been accused of nepotism and sexual harassment.

Is this book another grift? The New York Times reported that in the weeks before his firing, he tried to restructure his contract and sought a $1.7 million consultant job. He wrote to LaPierre: “My loyalty to the association is without question.”

Powell omits other things. In a book ostensibly about the Second Amendment, which is all of 27 words long, the words “well-regulated” and “militia” do not appear.

“Inside the NRA” reads like a business book, and not a good one. A lot of jargon gets tossed around. (Powell talks about an “existing vendor relationship” and wanting the N.R.A. to “become a leader in the conceal-carry space.”)

The unrelenting barrage of clichés is worse. The N.R.A. has debased the American language, and Powell adds to the sludge. If you only skimmed this book, you would think it was about a fox in a henhouse who caught flak and was thrown under a bus for playing laser-focused hardball like gangbusters and getting the short end of the stick while sensing blood in the water.

Powell is unconvincing on nearly every level. He reports the good news that “of the 18 million who have concealed weapons permits, only 0.8 percent have committed any serious crimes.” Whew! Wait. Siri, what is 0.8 percent of 18 million? The answer is that we have 144,000 people who have committed serious crimes walking around with concealed weapons permits. That’s 2,880 per state.

There is no one to root for in “Inside the NRA.” There are no top-drawer folks to be found. Steve Bannon becomes Powell’s “great friend” because they are both “Washington warriors in the business of fighting for the little guy.”

Powell makes for a dubious moralist. There’s room for just one example. When he talks about the Zegna suits and trips on private jets that LaPierre expensed to the N.R.A., Powell writes: “Times were tough, and it was not the time for Wayne to treat the association like a personal piggy bank.” It would have been fine, in other words, at a better moment.

There’s a lot more in “Inside the NRA.” Powell defends the AR-15 — the N.R.A. prefers to call it a “modern sporting rifle” — and reports that his wife has to tell him to put his away when guests are coming over. He suggests that, given the fanatical nature of gun lovers in Florida, and the ease with which they are stirred up, there may be violence along the state’s I-4 corridor after the election.

Powell’s book is a mea culpa. About the N.R.A.’s Kool-Aid, he writes, “I sold it, stirred it, drank it every day.” He lost his soul, he writes, and became part of the swamp. He’d like, he claims, again unconvincingly, to see the N.R.A. largely return to its roots as an organization dedicated to gun safety.

The N.R.A., in this telling as in others, is an organization in free fall. About New York’s attorney general, Letitia James, who has taken existential aim at the N.R.A., he writes, “I’m not betting against her.”

Witnesses to the Ravages of Fire, and Desperate to Avoid a Sequel

After a Feast, These Sea Anemones Grow More Arms

How Companies Are Getting Speedy Coronavirus Tests for Employees