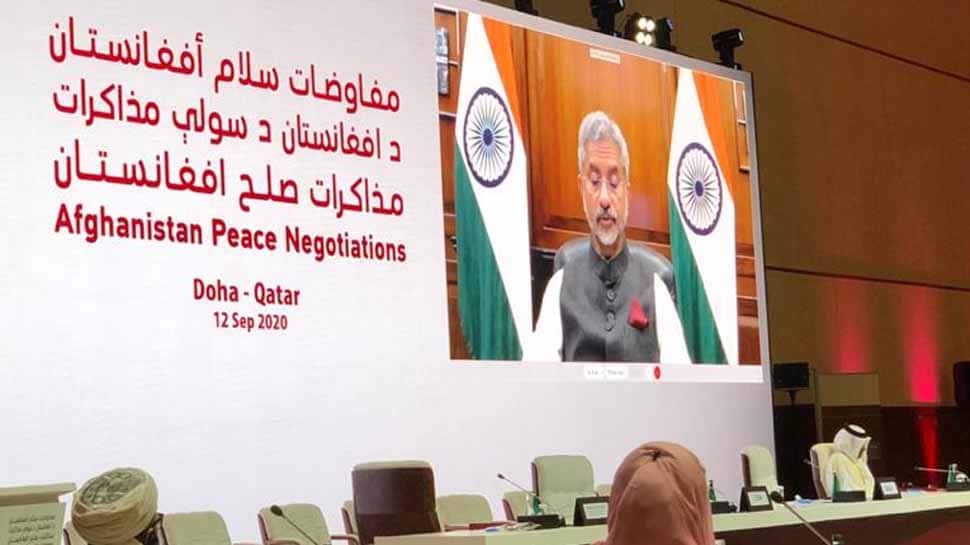 New Delhi: India extends its support for ceasefire in Afghanistan while participating at the ceremony marking the beginning of talks between te Afghan government and Taliban in Qatar’s Doha. Official negotiations between the Taliban and Afghan government starts on Monday.

India’s External Affairs Minister Dr S Jaishankar, who joined the meeting virtually, reiterated that Afghan peace process should be Afghan-led, Afghan-owned and Afghan-controlled and it must respect national sovereignty and territorial integrity of Afghanistan. He also pointed out that the process should promote human rights and democracy.

He stated that the process should ensure interest of minorities, women and the vulnerable to effectively address violence across the country.

On the issue of terrorism, the minister said, “Soil of Afghanistan should not be used for anti-India activities”. According to a United Nations report earlier this year, about 6000-6500 Pakistani terrorists are based in Afghanistan.

He highlighted India’s role as a development partner of Afghanistan, and how it reached out amidst COVID-19 crisis.

New Delhi is Afghanistan’s major development partner and has built number infrastructure projects in the country like India Afghanistan friendship dam in the western province of Herat and the Afghan Parliament in capital Kabul.

While Joint Secretary, Pakistan Afghanistan & Iran (PAI) division in ministry of external affairs, JP singh was in attendance at the ceremony, around 30 countries pariticipated in the ceremony. All the countries that share a border with Afghanistan have been invited which includes Iran, Pakistan and many central Asian countries.

Earlier this year, India was present at the signing of US Taliban deal which was signed on February 29 in Doha. The then Indian envoy in Doha P Kumaran represented India.

US Secretary of State Michael R. Pompeo is also in Qatar to attend the opening ceremony of Afghanistan peace negotiations.The Afghan government’s negotiating delegation reached Doha on Friday to start peace negotiations with the Taliban group.

The Reconciliation Must Be Televised