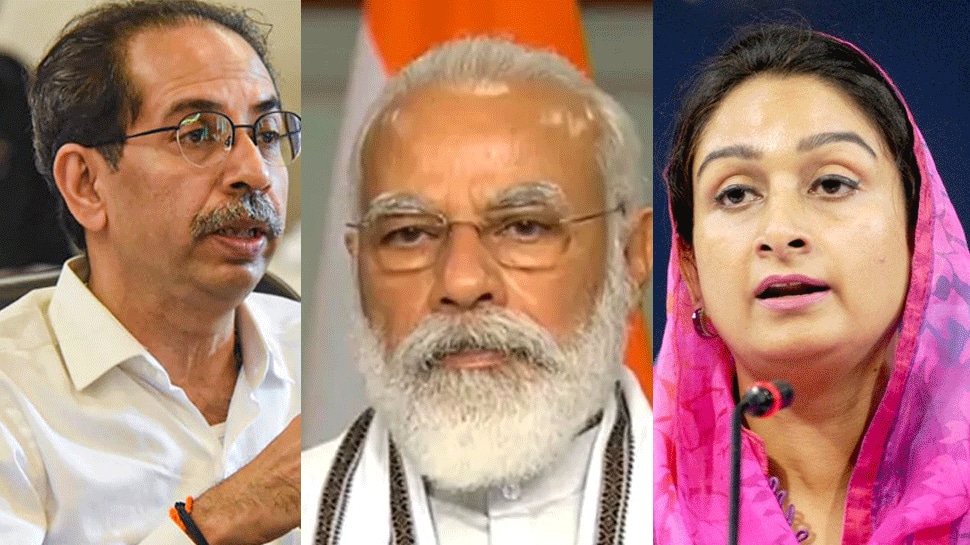 Mumbai: The Shiv Sena on Saturday yet again questioned the Narendra Modi government’s policies on economy, trade and agriculture, and alleged that it was moving towards privatisation of airports, Air India and railways and giving the control of farmers’ lives to traders and private players.

The Uddhav Thackeray-led party also alleged that the Centre introduced Bills on agriculture “without consulting” its allies, farmers’ organisations or opposition parties, and said the resignation of Union minister Harsimrat Kaur Badal has brought the issue to the fore.

In an editorial published in its mouthpiece ‘Saamana’, the party said the National Democratic Alliance (NDA) during the time of former Prime Minister Atal Bihari Vajpayee and senior BJP leader LK Advani was “different” as they used to “treat the NDA constituents with respect and consult with them”.

“Her resignation has been accepted. The Shiv Sena has already walked out of the NDA and now comes the SAD’s move,” it said.

“During the time of Vajpayee and Advani, the NDA allies used to be treated with respect, affection and trust. There used to be consultations on policy decisions and BJP leaders would hear out the views of the allies. In those times, spoken word had value,” the Saamana editorial said.

“Like Maharashtra, Punjab is an agrarian economy. Hence, before introducing the farmers’ Bills, the government should have held talks with the representatives of farmers’ organisations and agriculture experts in Maharashtra, Punjab and the rest of the country,” it added.

The Bills propose to create a system wherein traders can purchase farmers’ products even outside ‘mandis’. The Congress, DMK and Trinamool Congress opposed this proposal. They think it is anti-farmers, the Uddhav Thackeray-led party said.

“The Centre is pushing for privatization of airports, Air India, ports, railways, insurance companies, and also giving control of farmers’ lives to traders and private players. The Modi government’s policies regarding the economy, trade, agriculture create doubts,” it alleged.

“The government says that the new system would benefit farmers. Even if one believes it to be true, what was the harm in holding consultations with a few leading farmer leaders in the country? It should have at least held talks with NCP chief Sharad Pawar. But this government has nothing to do with the words ‘dialogue’ or ‘consultation’,” the Sena said.

The Lok Sabha on Thursday passed the Farmers Produce Trade and Commerce (Promotion and Facilitation) Bill and the Farmers (Empowerment and Protection) Agreement on Price Assurance and Farm Services Bill.

Harsimrat Kaur Badal said her decision to resign from the Union Cabinet to protest the farm sector bills symbolises her “party’s vision, its glorious legacy and its commitment to go to any extent to safeguard the interests of farmers”.

Barred From a Confederate Shrine, Protesters Scuffle in Georgia

How a Historian Got Close, Maybe Too Close, to a Nazi Thief