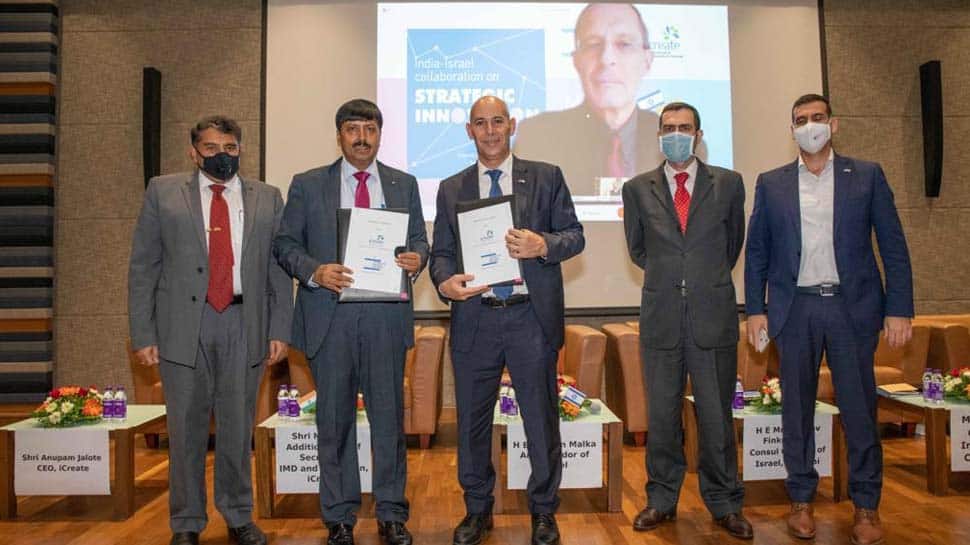 Ahmedabad: India and Israel on Tuesday signed a Memorandum of Understanding (MoU) to initiate a bilateral program in a bid to accelerate innovation and technology cooperation between start-ups and corporates from both countries. The aim of this program is to bring together Israeli and Indian entrepreneurs and startups to collaborate on innovative projects.

The MoU was signed between Israel’s Start-Up Nation Central and India’s International Centre for Entrepreneurship and Technology (iCreate). iCreate was established in 2012 to create a hi-tech start-up ecosystem. It has been working with Israeli universities and accelerators from the year of its foundation. The new campus of iCreate was inaugurated by Israel’s Prime Minister Benjamin Netanyahu and Prime Minister Narendra Modi on January 17, 2018.

iCreate and Start-Up Nation Central will initiate a unique Online Acceleration Program for market penetration to work with relevant technologies that match up with requirements originating from Indian corporations.

“The program will begin by defining a set of challenges that will then be shortlisted to the most relevant solutions and technology providers. This will be followed by a matchmaking mechanism that will be developed by leveraging both countries’ networks to support the process of adaptation and piloting these solutions in India,” read a statement by the Embassy of Israel.

The Israel-India growing partnership has developed into a strategic partnership in recent years, and since the beginning of the COVID-19 pandemic, the two countries have collaborated on a number of joint ventures such as Operation Open Skies and the integration of Israeli medical equipment and technologies in Indian hospitals.

Ambassador of Israel to India, Dr Ron Malka said, “Today we close a circle. A circle that started in 2018 when PM Modi and PM Netanyahu inaugurated this important incubator, iCreate, and now, two years later, we are signing, on the very spot where they stood, an MoU on innovation between Israel’s Start-Up Nation Central and India’s iCreate.”

“This agreement is an important milestone in the growing innovation collaboration between Israel and India and stands in line with the visions of the Prime Ministers. Israel has the most startups per capita worldwide, and India is the top innovation destination in Asia. Together, both countries continue to form partnerships and collaborations in technology and innovation to solve a range of global issues like COVID 19, renewable energy, and more,  implementing high-end technologies like AI, big data analysis, and more,” Malka added.

“This MOU is an important step in realizing the potential of the India-Israel relations in the field of innovative technologies,” said Proffesor Eugene Kandel, CEO of Start-Up Nation Central. “I’m confident this partnership will pave the way for more Israeli startups to collaborate with Indian organizations and firms to develop and implement cutting-edge Israeli technologies that address India’s and the world’s most pressing needs. We look forward to collaborating with i-Create, identifying Israeli partners to jointly develop solutions to the current challenges in India.”

The MoU was signed by Prof. Eugene Kandel, CEO of Start-Up Nation Central from Jerusalem, and Anupam Jalote, CEO of iCreate from Ahmedabad. Professor Vijay Raghavan, Principal Scientific Advisor to Government of India was present in the event through video-conferencing, while Dr. Ron Malka, Israel’s Ambassador to India and Yaakov Finkelstein, Israel’s Consul General in Mumbai were physically present. Others who were present virtually were Sanjeev Kumar Singla, India’s Ambassador to Israel. Chief Minister of Gujarat, Vijay Rupani sent his best wishes through a video message.

The partnership between the two entities was established with the encouragement and support of the Embassy of Israel to New Delhi and the Governments of India and Gujarat, in the hope of achieving the full adaptation of technologies and collaborative business models that will form the basis of long term, a sustainable collaboration between the innovation and startup ecosystems of both nations.