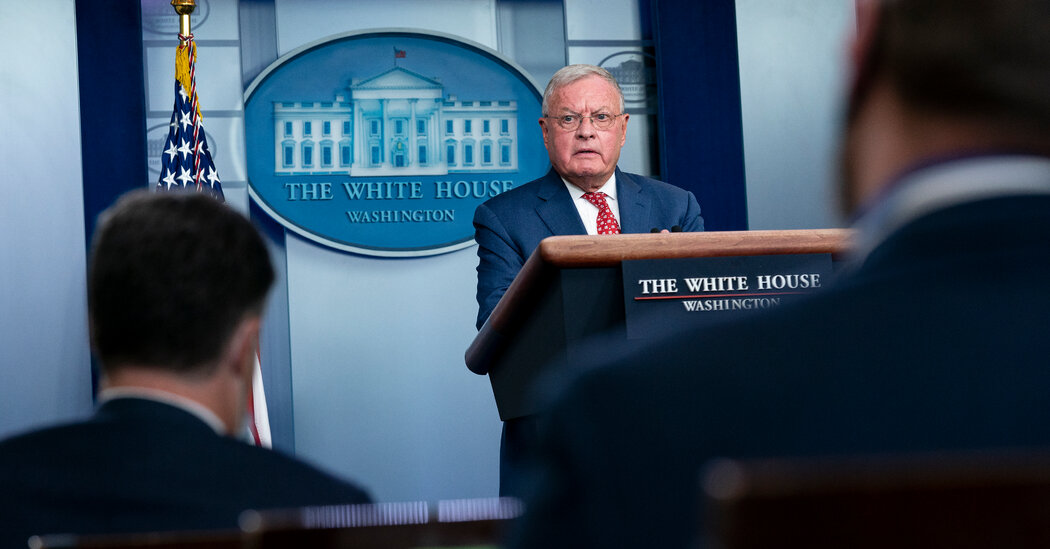 WASHINGTON — Top White House aides on Tuesday escalated their efforts to undermine the credibility of a former senior adviser to Vice President Mike Pence who has endorsed Joseph R. Biden Jr., accusing her of publicly criticizing the administration’s response to the coronavirus pandemic because she is disgruntled over being fired.

Keith Kellogg, the retired lieutenant general who is national security adviser to Mr. Pence, told reporters that he had recommended removing the aide, Olivia Troye, from her position as the vice president’s top Homeland Security adviser in charge of managing the coronavirus task force.

“The reason I fired her was her performances started to drop after six months working on the task force,” Mr. Kellogg said, calling Ms. Troye a “backbencher” in the administration’s efforts to combat the pandemic.

“She was responsible for coordinating meetings, bringing people together. And when the performance level dropped off,” he said, he went to Mr. Pence “and recommended she leave. I’m the one that escorted her off the compound.”

The comments from Mr. Kellogg and similar criticism of Ms. Troye from Kayleigh McEnany, the White House press secretary, were part of an aggressive public relations attempt to denounce and discredit former administration officials who are increasingly speaking out against President Trump.

Miles Taylor, the former chief of staff to Kirstjen Nielsen, the former secretary of homeland security, last week announced a new organization with more than two dozen former administration officials and other Republicans who oppose Mr. Trump’s bid for a second term. Ms. Troye is a member of the group, as is Josh Venable, who served as chief of staff for Betsy DeVos, the secretary of education.

“These are not profiles in courage; these are profiles in cowardice,” Ms. McEnany said on Tuesday during a briefing with reporters.

In a statement posted on Twitter, Ms. Troye disputed Mr. Kellogg’s claim, adding a photo of a ceremonial coin that she said Mr. Kellogg had given her upon her departure.

“Sad that Gen. Kellogg is telling a bald faced lie to protect the President,” she wrote. “I resigned on my own accord & was asked to stay. He never escorted me out. He knows this. I wrote a note thanking all the colleagues who had worked so hard with me in spite of POTUS & I stand by that.”

Mr. Taylor issued a statement on Twitter after the briefing as well, saying: “The truth drives this White House crazy. My feelings aren’t hurt, @PressSec. But you didn’t specifically deny what I’ve said about POTUS. That’s because it’s all real. And y’all are worried about Americans hearing it.”

In an opinion essay posted on CNN’s website on Tuesday, Mr. Taylor praised Ms. Troye for coming forward, adding that senior administration officials had “sung her praises to me repeatedly during her two years at the White House.”

Ms. Troye, a lifelong Republican who had previously served in national security positions in the George W. Bush administration, came forward publicly last week to accuse Mr. Trump of botching the response to the coronavirus and endangering lives in the process. In news media appearances and a campaign ad, she said she planned to vote for Mr. Biden, the Democratic presidential candidate.

Ms. Troye also said that she had heard the president disparage his supporters, saying during a task force meeting that he welcomed the virus because it meant he would not have to shake hands with “disgusting” people.

Ms. Troye said on Tuesday that her experience on the task force had been “frightening” because of the ways in which Mr. Trump’s public comments undercut the efforts by the task force to stop the spread of the virus and save lives.

“I felt I needed to tell the truth about what was happening and what we were dealing with internally,” she said during the interview. “Especially with the president who, you know, was very undermining about the work that was going on in the task force. I just felt that now it mattered more than ever.”

Mr. Kellogg said he had “never heard” the president say that about Covid and handshaking. He did not refute any of Ms. Troye’s specific claims, instead insisting generally that the administration had mounted an effective response to the pandemic.

After he spoke, Ms. McEnany returned to the podium to brand Ms. Troye “a disgruntled detailee” and read from a letter she had sent to colleagues after her departure saying that it had been “the honor of my life” and that she had “witnessed firsthand how dedicated and committed all of you have been to doing the right thing.”

One of the Parkland shooting survivors is participating in an online rally focused on youth turnout.

How a Pledge to Dismantle the Minneapolis Police Collapsed

One of the Parkland shooting survivors is participating in an online...