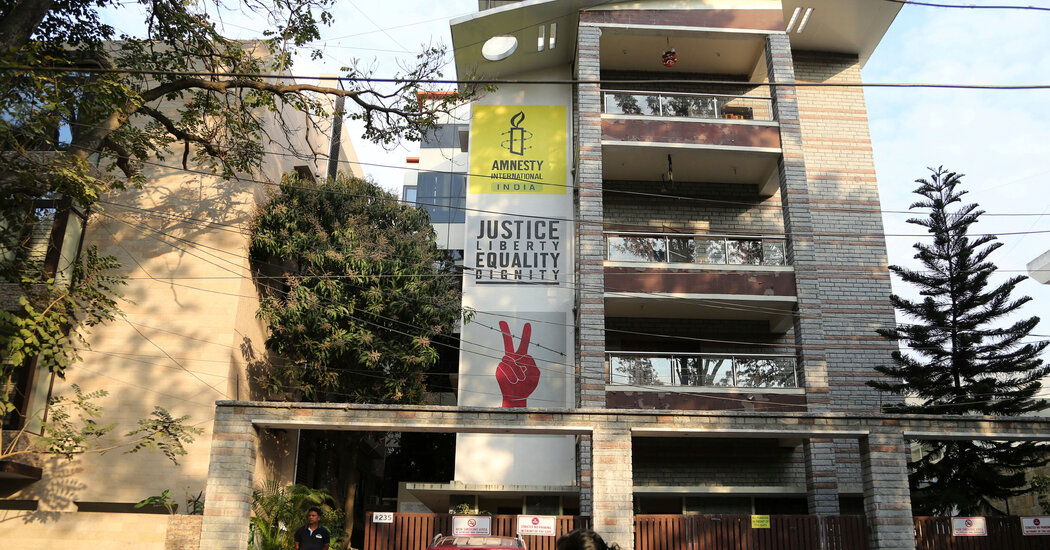 SRINAGAR, Kashmir — The human rights organization Amnesty International said on Tuesday that it had ceased its operations in India and laid off its entire staff in response to a series of government reprisals including the freezing of its bank accounts.

Amnesty said that the government of Prime Minister Narendra Modi had targeted the organization for years in response to its work exposing human rights violations in India. In recent months, the group has published reports on the Delhi police’s role in fomenting anti-Muslim violence and on the use of torture in Kashmir.

The Indian government said in a statement that the allegations from Amnesty were “unfortunate, exaggerated and far from the truth.” The organization has repeatedly violated local laws by circumventing the regulations under which foreign entities can receive donations from abroad, the government added.

“All the glossy statements about humanitarian work and speaking truth to power are nothing but a ploy to divert attention from their activities which were in clear contravention of laid-down Indian laws,” the statement said.

Amnesty International India denied the authorities’ accusation that the group had violated the country’s rules on foreign funding, which are intended to combat money laundering and which appear to be the pretext for the freezing of the accounts.

The government’s campaign against nongovernmental organizations, which Amnesty described as a “witch hunt,” had made fund-raising and operating effectively impossible, the group said. Amnesty has previously ceased operations in only one other country: Russia, in 2016.

“The continuing crackdown on Amnesty International India over the last two years and the complete freezing of bank accounts is not accidental,” the organization said in a statement, but was instead the result of the group’s “unequivocal calls for transparency in the government.”

In 2018, the licenses of nearly 20,000 nongovernmental organizations were canceled by the Indian Home Affairs Ministry.

Many of those organizations were critical of Mr. Modi and raised questions about his role in the anti-Muslim riots in the western state of Gujarat when he was the chief minister there in 2002.

Previous governments, including those led by the opposition Indian National Congress party, have also been accused of targeting organizations critical of their policies. Nevertheless, opposition politicians used the moment to denounce Mr. Modi.

“India’s stature as a liberal democracy with free institutions, including media & civil society organizations, accounted for much of its soft power in the world,” Shashi Tharoor, a Congress party politician and former diplomat, wrote on Twitter. “Actions like this both undermine our reputation as a democracy & vitiate our soft power.”

Rajat Khosla, an Amnesty official, called the crackdown a “very worrying development.” He added that it was “also very saddening to see what is happening with the civil rights movements in India.”

Mr. Khosla said that his organization had been facing systematic intimidation by the government. It was only after an earlier court intervention that Amnesty had been temporarily able to use funds generated locally to run its operations, he added.

In recent months, the group has released reports on the complicity of the Delhi police in the March riots that killed at least 53 people, most of them Muslim.

It has also demanded the release of all political leaders, journalists and activists in Kashmir, as well as the restoration of all internet services in the restive region, which was recently stripped of its semiautonomous status.

Harsh Mander, an Indian human rights activist, said the government was targeting activists to crush the last dissenting voices in the country.

“This government is openly at war with the people at this moment,” Mr. Mander said. “They have chosen two targets: Muslims and dissenters.”

Authoritarians From Mussolini to Trump

Son of Federal Judge Esther Salas Is Killed by Gunman in Their New Jersey...