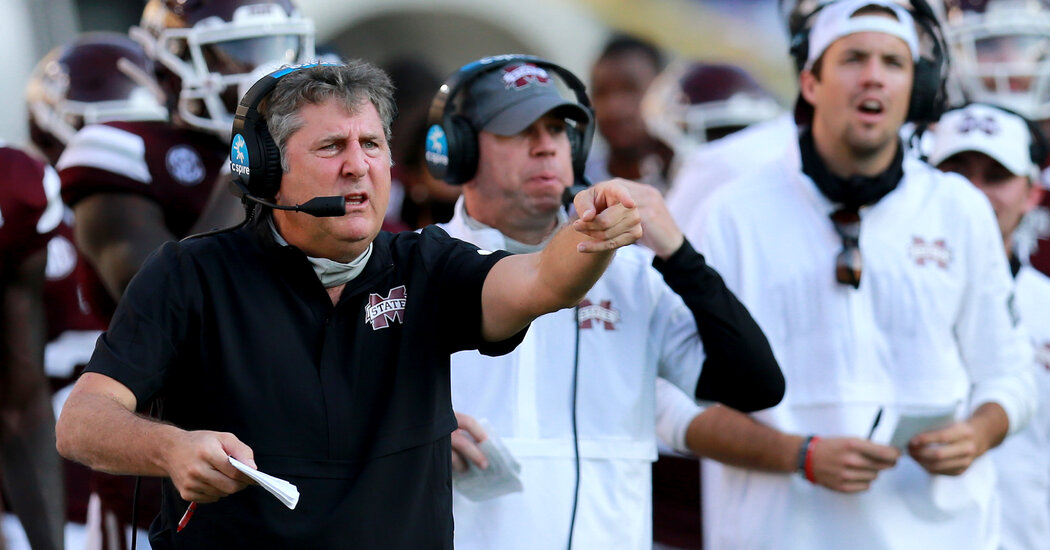 It was the splashy Southeastern Conference debut that Mississippi State wanted from Coach Mike Leach: His Bulldogs swept into Louisiana State’s Tiger Stadium, passed for 623 yards and conquered the reigning national champion.

The game also included a widely broadcast shortcoming in college football’s promises to adhere to coronavirus precautions: For much of his time on the sideline last Saturday, Leach’s conference-mandated face covering hung around his neck.

“I tried to remember the best I could,” Leach said this week. “Then I found myself talking all the time.” Play calling, he added, had contributed to “a constant state of talking, so between me taking it down to talk, me lifting it up and it falling down on its own and me remembering to put it back up, I think there were a number of challenges there.”

Perhaps more than any other major American sport, football is grappling with a scourge of overt, if not always deliberate, mask violations during competition at the collegiate and professional levels. The N.F.L. has angrily watched some of its biggest names defy its rules. Most of the coaches in the SEC, the sport’s most prominent collegiate conference, repeatedly breached the league’s policy during its opening weekend, and college conferences that are playing football this fall, or planning to, have begun weighing how to police their stated protocols more forcefully.

The question is not easily solved in a sport that has long been politicized, that prizes its image as a haven for the macho and that, at the top ranks of the college game, lacks centralized governance. One league’s straightforward crackdown could be another’s public relations nightmare.

The N.F.L., which this week postponed the Steelers-Titans game because of an outbreak among Tennessee players and staff members, has so far opted for a hard line, handing down at least $1.7 million in fines to coaches and franchises and scrutinizing the Las Vegas Raiders after players skipped wearing masks at an indoor charity dinner. Troy Vincent Sr., a top league executive, warned coaches in a memo this week that penalties for game-day violations could escalate to suspensions or a loss of draft picks.

There has been far less urgency in the college game. With limited exceptions, masks are recommended or required for players when they are not on the field competing, yet no coach or player has been publicly disciplined for not wearing a face covering on the sidelines.

The director of the Centers for Disease Control and Prevention, Dr. Robert R. Redfield, has called cloth face coverings “one of the most powerful weapons we have to slow and stop the spread of the virus, particularly when used universally within a community setting.” The C.D.C. has urged people to wear masks when they are near people with whom they do not live, especially when it is difficult to socially distance.

Although critics of football’s mask rules have correctly noted that most games are outdoors and that players and coaches are regularly tested for the virus, medical experts and sports executives believe that face coverings on the sidelines still help curb the pathogen’s spread. Regular testing has detected outbreaks, but has not left teams immune to them.

This week, Notre Dame said 18 football players had tested positive for the virus, and the coach there, Brian Kelly, told ESPN that the outbreak was believed to be linked to a pregame meal.

Beyond concerns about guarding teams against the virus, leaders in sports and pandemic response believe the sight of players and coaches wearing masks can powerfully amplify a public health recommendation that has been bitterly debated in some parts of the United States.

“Our coaches recognize they’re role models, not just for the student-athletes on the team but in their communities,” said Larry Scott, the commissioner of the Pac-12, which plans to begin its football season in November.

The SEC, the Alabama-based conference with a footprint that includes some Republican-controlled states where masking rules and recommendations have been widely resisted, is already facing scrutiny after its leaders spent months pledging that the league would comply with experts’ advice. Not long ago, in fact, all of the SEC’s coaches appeared in a public service announcement that said: “Wear your mask. We’re wearing them. Are you?”

In a two-page memo to coaches on Wednesday, the SEC commissioner, Greg Sankey, wrote that “some head coaches, assistant coaches, support staff and student-athletes need clear reminders of the requirement they fulfill the new health protocols.”

“I fully recognize the passion associated with coaching and competing,” Sankey added. “Yet we will all be watched closely and must be certain to comply with masking, distancing and hygiene protocols to minimize the potential spread of Covid-19.”

Without elaboration, he said that conference officials would “take additional action, if necessary, to ensure adherence” to health protocols.

In the meantime, the conspicuous violations of mask policies have alarmed some experts and revived questions about how closely athletic programs nationwide are following health rules away from television cameras.

A survey of more than 1,200 college athletic trainers that was released last month found that just 47 percent of coaches and staff members across sports were “fully compliant” with safety protocols related to the virus. The survey, conducted by the National Athletic Trainers’ Association, also found that roughly 7 percent of coaches and staff members did not follow the rules at all.

Despite the high-profile lapses, some coaches, including a handful in the SEC, have openly embraced masks, beyond lending their faces to the public service announcement.

Sam Pittman, the Arkansas coach who scrupulously wore a mask during last weekend’s loss to Georgia, said in an interview that he had spent part of the off-season testing face coverings to see which would best let him speak into his headset. He said he had used a mask during practices to become more accustomed to it.

But Leach suggested there were some practical issues at play with using what he described as a “face sock.”

“Do you ever find that pretty soon those things will start to smell bad and all of a sudden, you’re going: ‘What’s that smell? What’s going on out there?’” Leach said during a news conference colloquy with this New York Times reporter, drawing some Mississippi State faithful to Twitter’s ramparts. “No, there’s nothing going on out there,” Leach continued. “That’s your breath.”

He asked whether there was “a trigger or something that reminds you when to pull that thing back up.”

“I find myself too preoccupied to do it, and then all of a sudden I notice it’s around my neck there,” he said.

Asked whether his masking issues were a matter of happenstance or a statement of some kind, Leach replied, “I try to do my best with it, but once you’re six feet apart, I can’t help but wonder if some of this isn’t an homage to politicians.”

Whether Sankey’s memo will prompt broader compliance will be broadly tested on Saturday, including during the game when Pittman’s Razorbacks visit No. 16 Mississippi State.

“With a little practice, who knows?” Leach said before the commissioner’s reminder. “It may be better this week.”

U.S. Prepares to Take Sudan Off List of States That Support Terrorism

‘Song Exploder’ Reveals the Eureka Moments Behind the Hits