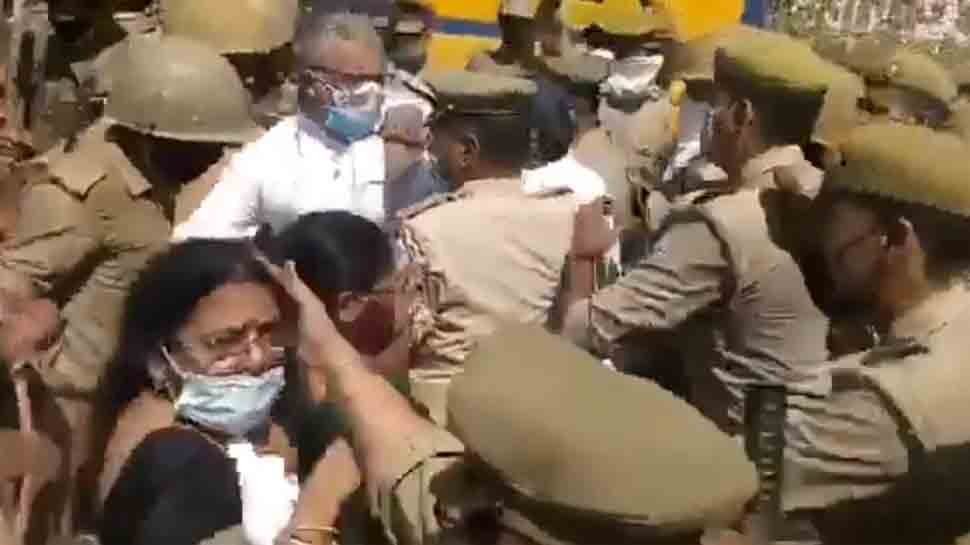 HATHRAS: A day after Congress leaders Rahul Gandhi and Priyanka Gandhi were stopped and allegedly manhandled by Uttar Pradesh Police, Trinamool Congress MP Derek O’Brien along with some party leaders were also intercepted while on their way to Hathras to meet the gangrape-murder victim’s family members.

Visuals from the scene show a scuffle between the police and Trinamool Congress delegation during which Brien was pushed to the ground by UP police personnel. After being stopped, Brien questioned the statement government for stopping the delegation from visiting Hathras and said, “You saw the visuals. We didn’t come for politics here. This is a sacred place. We wanted to walk 1 km down.”

He also asked the Yogi Adtiyanath government why was a senior UP police officer allowed to push TMC MPs to the ground and if any of the MPs were armed?

According to the delegation, the Trinamool MPs were visiting Hathras to express solidarity with the grieving family of the victim and convey their condolences.

“A delegation of the Trinamool MPs that travelled about 200 kms from Delhi has been stopped by UP Police from entering Hathras,” a statement by Trinamool Congress said, adding they “were traveling separately to express solidarity with the grieving family and convey their condolences.”

“We are peacefully proceeding to Hathras to meet the family and pay our condolences. We are traveling individually and maintaining all protocols. We are not armed. Why were we stopped? What kind of jungle raj is this that elected MPs are prevented from meeting a grieving family? At this moment, we are just 1.5 km from the victim’s home in Hathras,” the statement said.

The incident comes just a day after Congress leaders Rahul and Priyanka Gandhi were stopped and physically manhandled by UP police and several other Congress workers were walking towards Hathras to meet the victim’s family.

Taking Hard Line, Greece Turns Back Migrants by Abandoning Them at Sea