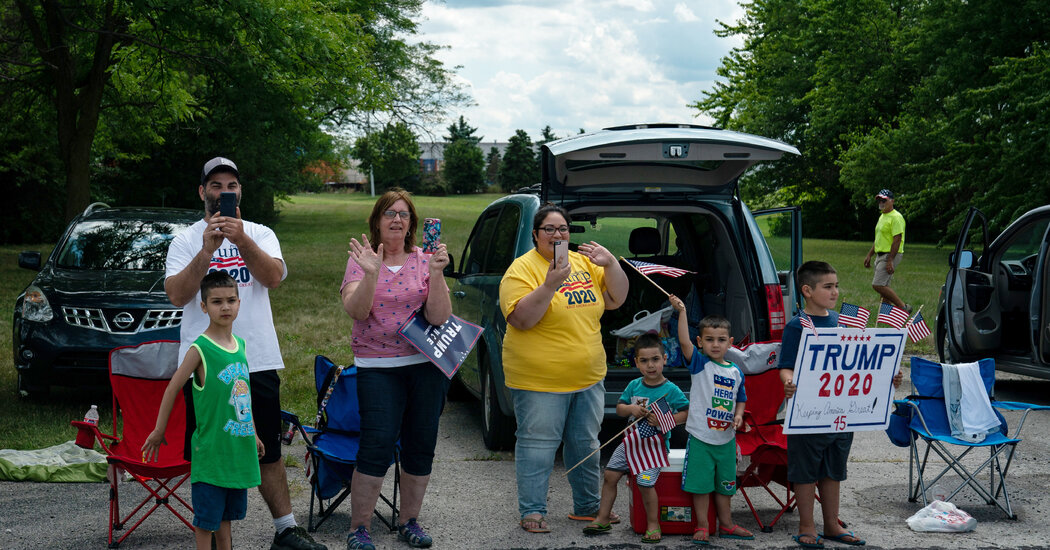 Welcome to Poll Watch, our weekly look at polling data and survey research on the candidates, voters and issues that will shape the 2020 election.

No Republican has ever won a presidential election without taking Ohio, and Donald J. Trump carried it with ease in 2016, performing strongly with white voters in almost every demographic.

If he doesn’t capture the state in November, it’s hard to see him winning the election — but the polling picture looks more worrisome for him this time around.

In a Quinnipiac University poll released last week, Joe Biden had a statistically insignificant edge of one percentage point on the president, while a survey released the same day by Fox News put Mr. Biden ahead by five points.

After the president said early Friday morning that he had tested positive for the coronavirus, the future of the race was thrown even further into doubt. But Ohio’s bellwether status remains a dependable fact of political life.

“If he doesn’t win Ohio, it’s over,” David Cohen, a political scientist at the University of Akron, said in an interview. He noted that Mr. Trump had traveled to Ohio several times last month, holding rallies in white, working-class areas in a tacit acknowledgment of how badly he’ll need the state in order to eke out an Electoral College victory.

“If you think about it, why the heck is he spending any time in Ohio in September, in a state that he won by over eight points?” Dr. Cohen said. “The only answer is that he and his campaign know that he’s in trouble.”

Four years ago, Mr. Trump built a particularly balanced coalition among Ohio’s white voters, winning across education levels. But his support in the state has waned over the past four years, particularly in the suburbs.

In the process, white voters in Ohio have become about as heavily divided along educational lines as they are in the rest of the country. It is evidence, from a conservative Midwestern stronghold where most state offices are consistently held by Republicans, that Mr. Trump’s divisive brand of politics has been more effective at sifting voters out of his coalition than at bringing them in.

In 2016, exit polls showed that Hillary Clinton actually did better among non-college white voters in Ohio than she did nationally, reflective of a longstanding blue-collar Democratic tradition in parts of the state. Among white voters with college degrees, meanwhile, the opposite was true: She underperformed especially badly in Ohio, where staunch white-collar conservatism is a long-held custom.

The result is that Mr. Trump did almost as well among white people with a degree in Ohio — who deeply distrusted Mrs. Clinton — as he did among those without a college education.

But this has all changed. Averaging together the recent Fox and Quinnipiac polls, Mr. Trump was running 12 points behind his 2016 totals among white voters with degrees.

As a result, while exit polls four years ago showed Mr. Trump winning the suburbs in Ohio by 20 points — leagues better than his support in suburbs elsewhere in the country — the Fox poll last week put him 10 points behind Mr. Biden in the state’s suburbs.

Thomas Sutton, the director of the Community Research Institute at Baldwin Wallace University outside Cleveland, pointed out that the only part of the state with a significant growth in population in recent years had been the Columbus area, home of the state capital and its major public university, where there has been an influx of health care industry jobs and other white-collar work in recent years.

Columbus’s growth, and the expansion of suburbs and exurbs into what used to be rural and blue-collar areas, might have once spelled an opportunity for Republicans. But under Mr. Trump the Republican Party has lost its footing among specifically these kinds of voters — and the growth in Franklin County, which includes Columbus, plays into Mr. Biden’s hands.

Mrs. Clinton barely had the advantage in the Columbus area in 2016, according to exit polls; this year, Mr. Biden appears poised to far outmatch her totals there.

“Trump’s support has peaked, and particularly in the suburbs, people are turning toward Biden,” Dr. Sutton said. “Some of them were Obama voters before that; some of them are dyed-in-the-wool Republican types. And in both cases, they’ve had enough of Trump, is what they say.”

In the case of disenchanted Republican voters, “they support the politics of his administration — lower taxes, deregulation, conservative judges and justices being appointed,” Dr. Sutton added. “But it’s Trump himself that they’ve had enough of. It’s not that they’re embracing Biden, but they’re ready to move away from Trump.”

While the president maintains a commanding lead among rural voters, recent polling has put him more than 10 points behind his 2016 numbers with this group. Dr. Cohen, the University of Akron professor, said that Mr. Trump had also worn on the patience of some in these areas, after making great promises to them in 2016.

“When he came to Ohio and told people to not sell their houses, that he was going to bring all their jobs back — and he clearly hasn’t — people pay attention,” Dr. Cohen said. “The people that worked at that G.M. Lordstown plant, they know the jobs haven’t come back,” he added, referring to a General Motors factory whose abrupt closure in 2018 Mr. Biden has sought to exploit on the campaign trail.

Dr. Cohen added that the president’s decision to target Goodyear in a public spat had alienated some voters in northeastern Ohio, where the company is both iconic and a major employer.

The Quinnipiac poll found that when given a list of eight political issues, Ohio voters selected the economy and “law and order” as their top areas of concern, with 27 percent and 17 percent naming those two — a positive sign for Mr. Trump, who has sought to center voters’ focus on these topics. An additional 14 percent named the coronavirus, and 11 percent cited issues of racial injustice — more favorable political terrain for Mr. Biden.

But the virus has been a matter of major concern across the state, and Dr. Cohen said that a poll that he and his colleagues conducted at the University of Akron’s Ray C. Bliss Institute of Applied Politics had shown that worries about it cut across demographic divides.

The Fox poll last week found that 69 percent of likely voters said they thought the virus was no better than “somewhat” under control.

Ohio has been conducting no-excuse absentee voting in statewide elections for over a decade and is offering an array of early-voting options this year. Other than a legal dispute over how many early-voting drop boxes to allow in each county, there have not been many high-profile examples of legal challenges to ballot access.

Ohio allows election officials to open and scan absentee ballots before Election Day, contacting voters whose ballots have errors so that they can fix them and preparing the ballots to be counted at polling places. As soon as polls close at 7:30 p.m., those ballots can be counted.

Therefore, unlike in other key states that wait longer to count mail-in ballots, it’s possible that in Ohio, votes cast by mail — which are likely to be more heavily Democratic than others — will be among the first to be counted.

Terence Conran, Designer and Retail Magnate, Is Dead at 88

Ruth Bader Ginsburg Is Hospitalized With a Possible Infection

Dolphins Have Hidden Fingers. So Do Seals. These Sea Creatures Did Not.