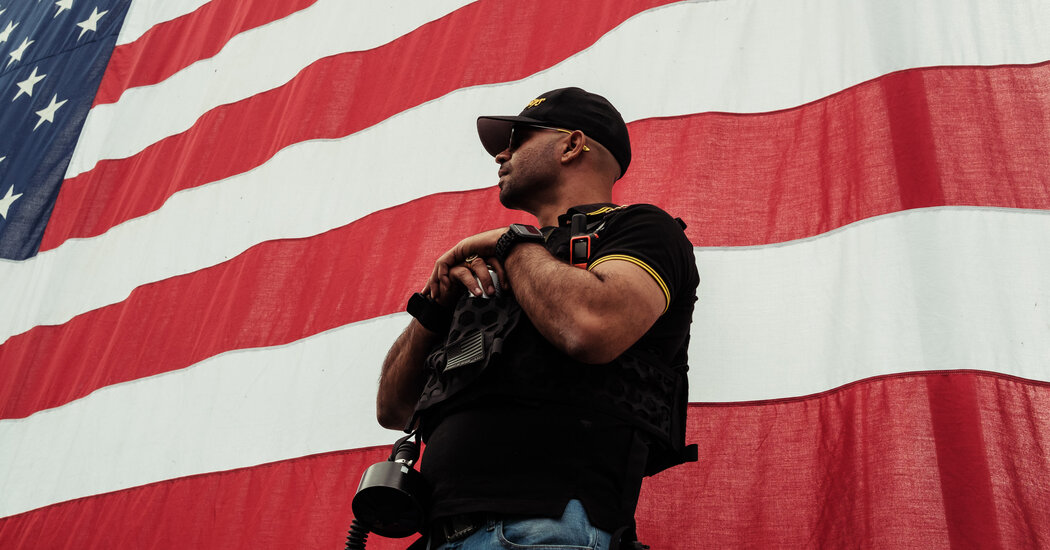 Enrique Tarrio, the Florida state director of Latinos for Trump, a national grass-roots organization unaffiliated with the Trump campaign, is also the chairman of the Proud Boys, a far-right organization linked with white supremacy and acts of violence.

Mr. Tarrio said in an interview Thursday night that he had “personally knocked on 40,000 doors for the president” and was a close personal friend of Roger J. Stone Jr., a former presidential adviser.

When he was asked at the presidential candidates’ debate on Tuesday to denounce the Proud Boys, the president said, “stand back and stand by.” Mr. Tarrio said he did not interpret Mr. Trump’s comments as a call to arms: “What I took from it personally was to stand by him.”

Mr. Tarrio said that his group has benefited from former Vice President Joseph R. Biden Jr.’s making an issue out of white supremacy in America.

Mr. Biden “should have focused on Covid,” he said. “To him, the Proud Boys are a bigger threat to the nation than Covid. He’s doubled our numbers.” Mr. Tarrio denied that he was associated in any way with white supremacy.

Still, the Trump campaign on Thursday was quick to distance itself from Mr. Tarrio. “This individual is not affiliated with the Trump campaign, the family, or our official Latinos for Trump coalition,” said a spokesman, Ken Farnaso. “He is also not the state director of our coalition and is not on our advisory board.”

In fact, the Trump campaign in 2019 sent the Latinos for Trump organization a cease-and-desist letter, asking its leaders to stop all activities that suggested any formal affiliation with the campaign.

The group’s new president, Bianca Gracia, said in an interview that since then, the group had new leadership and had willingly attached disclaimers to all of its activities. She said there had been no further friction with the campaign. In fact, she said, her entire leadership team (but not Mr. Tarrio) would be attending a fund-raising lunch in McAllen, Texas, on Friday, where Donald Trump Jr., the president’s son, is speaking. The event is hosted by the Hidalgo County G.O.P.

She also defended Mr. Tarrio. “He’s my state director, doing a fantastic, fabulous job,” she said. “A lot of us wear different hats.”

How a Couple Got Each Other Through Cancer

In 1920, Native Women Sought the Vote. Here’s What They Seek Now.