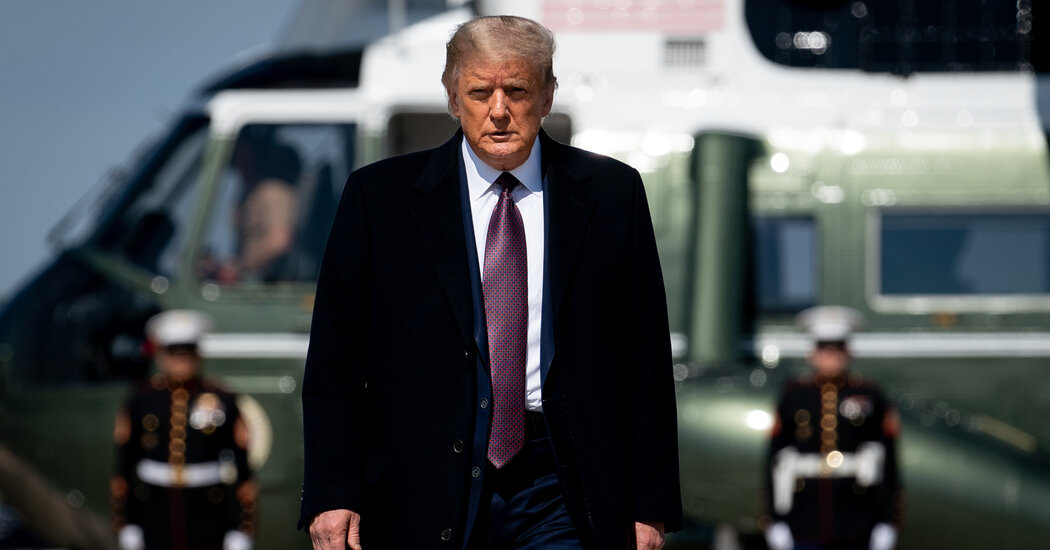 May President Trump and the first lady recover swiftly after testing positive for the coronavirus. For their sake — and for the sake of the nation.

The president’s health is a matter of national security. That’s one reason it’s been so frustrating to watch as Mr. Trump has flouted basic public health guidelines and the advice of his own government’s experts. Every time he refused to wear a mask or observe social distancing guidelines, he put not only himself but also all of America at risk.

Mr. Trump’s illness will throw the highest levels of government into disarray. Even if he does not become seriously ill, the president will be unable to perform many of his duties until the threat of contagion has passed. Following his diagnosis, his public schedule was cleared on Friday except for a phone call “on Covid-19 support to vulnerable seniors” — which Vice President Mike Pence ended up handling.

With more than 207,000 American lives already lost to this pandemic, the potential for a worst-case scenario is all too clear.

A serious presidential illness is an issue of national importance under ordinary circumstances. Coming just a month out from Election Day, the potential for chaos is exponential. Mr. Trump will need to leave the campaign trail for an indeterminate amount of time, canceling rallies and fund-raisers and throwing the future debates into limbo. Voters were already anxious about the nation’s ability to hold a free and fair election — anxiety fueled by Mr. Trump, whose core campaign strategy has been to claim that Democrats and the “deep state” are working to rig the race. Speculation about his health will only fray nerves and further destabilize the situation. The conspiracy theorists and disinformation trolls will do their best to maximize the turmoil.

To minimize the chaos, the American public needs to be kept closely apprised of Mr. Trump’s condition and of how the situation — read: the nation’s leadership — is being managed. The first lady has tweeted that the couple is “feeling good,” and Mr. Trump’s physician has expressed confidence that the president will be able to continue his duties “without disruption” from his residence. At a Friday media briefing, the White House chief of staff confirmed that the president was experiencing “mild symptoms” — after The Times had reported as much. The White House did not reveal the illness of Hope Hicks, the presidential aide who was exhibiting symptoms on Wednesday and received a positive diagnosis on Thursday, until after it was reported in the media.

None of this is reassuring. In times of crisis, the public looks to the president for reassurance and guidance. What happens when he is at the heart of that crisis? Public confidence plummets, and tensions rise. Global markets are shaken. Foreign adversaries search for ways to exploit the uncertainty. In a misguided attempt to convey strength, Mr. Trump has made America weaker and more vulnerable.

The president is like a stone thrown into a pond, where the ripples quickly spread. Top-level aides and advisers will have to quarantine themselves. Already, a list of people who have been in recent close contact with Ms. Hicks is making its way around social media. In coming days, we will learn whether those who have been in proximity to Mr. Trump this week — including several members of Congress and the Supreme Court nominee Amy Coney Barrett — are also sick. Already, Senator Mike Lee, a Utah Republican and member of the Judiciary Committee, has announced that he has tested positive.

Now is not a time for political games. The president’s health is not a private matter. Americans need to have confidence that Mr. Trump is in a position to handle the nation’s business — and, if not, that he will hand over the reins to the vice president until his condition improves. For too long he has failed to take this virus, or his own safety, seriously.