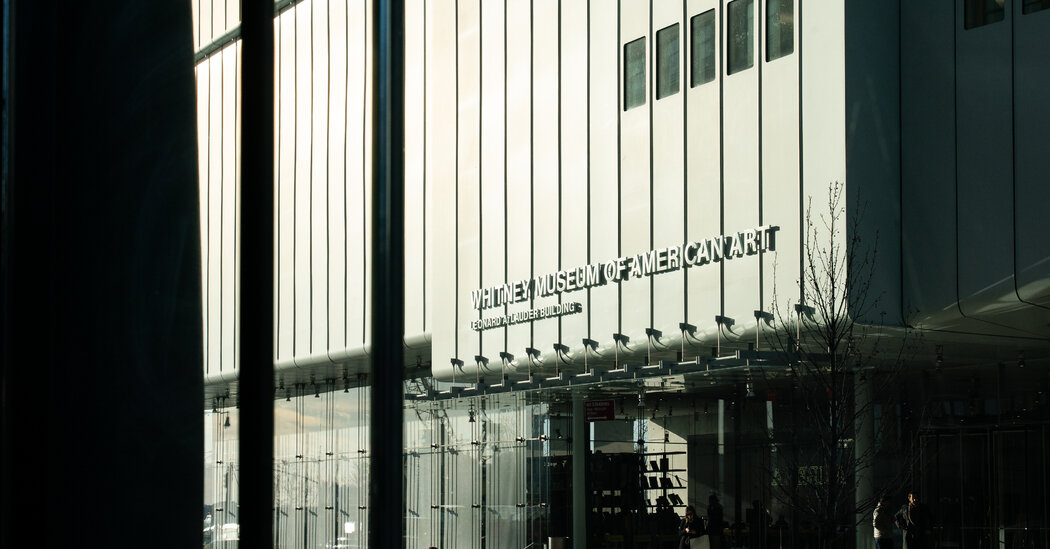 The Whitney Biennial that was scheduled for spring 2021 has been postponed for a year, the museum said on Thursday, months after the pandemic interrupted its exhibition schedule and cast a long shadow of uncertainty.

Every two years, the Biennial takes over much of the Whitney Museum of American Art with a survey meant to reflect that social, political and cultural moment.

But the museum, which was closed to the public for nearly six months, was forced to reassess, said Scott Rothkopf, the Whitney’s senior deputy director and chief curator.

Another reason for the postponement, he said: The Biennial curators heard from artists that the pandemic had stymied their work, limiting access to studio space and tools that they needed to make their art. “We wanted to make sure artists had the space and time they needed to do their best work,” Mr. Rothkopf said.

The Biennial is now slated for April through August of 2022.

Organizing the exhibition also involves artists traveling to the museum and curators making trips to the artists’ studios, which has also been complicated by the pandemic.

It is not unprecedented for the Biennial to be thrown off schedule. The Whitney postponed what would have been the 2016 Biennial to 2017 so curators could adjust to the new building downtown. And after the 1997 Biennial, there was not another one for three years because the museum had wanted to make room for a lengthy exhibition called “The American Century” in the run-up to the turn of the millennium.

At the Biennial in 2019, eight artists made waves after threatening to pull their work in protest of Warren B. Kanders, then a trustee, who owns a company that distributes law-enforcement equipment, the Safariland Group. Mr. Kanders ultimately resigned from the board, and the artists allowed their work to be shown. (In June, Mr. Kanders said that he was divesting his company of divisions that sell “crowd-control solutions, including chemical agents, munitions and batons, to law enforcement and military agencies.”)

When drawing up the new exhibitions schedule, which the museum also announced on Thursday, Mr. Rothkopf said the Whitney had prioritized the shows that were postponed, like Salman Toor’s first solo exhibition at a museum, which was to start days before the shutdown in March. Ultimately, the museum, which reopened Sept. 3, said that it did not have to cancel any exhibitions because of the pandemic.

The museum has rescheduled Mr. Toor’s exhibition — a collection of figurative works that primarily depict gay men of South Asian descent — to start on Nov. 13. (Mr. Toor’s paintings were at the museum ready to be put on exhibition in March and have remained there since.)

Also opening in November is an exhibition on the Kamoinge Workshop, a collective of Black photographers that formed in New York City in 1963, which was supposed to go on display in July.

To adjust to the reduced crowds, the museum has also lengthened the duration of the exhibitions to make sure that people have more of a chance to see them, Mr. Rothkopf said. Right now, museums in New York City are allowed to reach only 25 percent capacity and must use a timed ticketing system.

Another exhibition planned for this year, a midcareer survey of the painter Julie Mehretu’s work, had been planned to be shown for about 12 weeks; instead, the museum will have it stretch to about 20 weeks, starting March 19. Other exhibitions that have been rescheduled include one featuring the photographer Dawoud Bey, known for capturing life in Harlem, which debuts April 17; a retrospective on Jasper Johns, who is widely regarded as America’s foremost living artist, which opens next September; and a commission from the performance artist Dave McKenzie.

The Whitney’s new slate of programming features performance and public art, including installations across the street from the museum by Andrea Carlson, whose work examines the erasure of Indigenous cultures, and Martine Gutierrez, who often explores issues of race and gender through elaborate scene making with herself as the model; a video installation about a new species of cricket in Hawaii by Madeline Hollander; and performance art by the theatrical trio My Barbarian.

Mr. Rothkopf said the upcoming shows had an emphasis on the innovations and traditions of Black photographers and that there was notable diversity in the artists featured.

The museum also said that a long-planned sculpture by David Hammons, which will sit along the edge of Pier 52 and cross into the Hudson River, would be completed in December.

John Lewis: Together, You Can Redeem the Soul of Our Nation

‘Ridicule’: The French Reaction to ‘Emily in Paris’