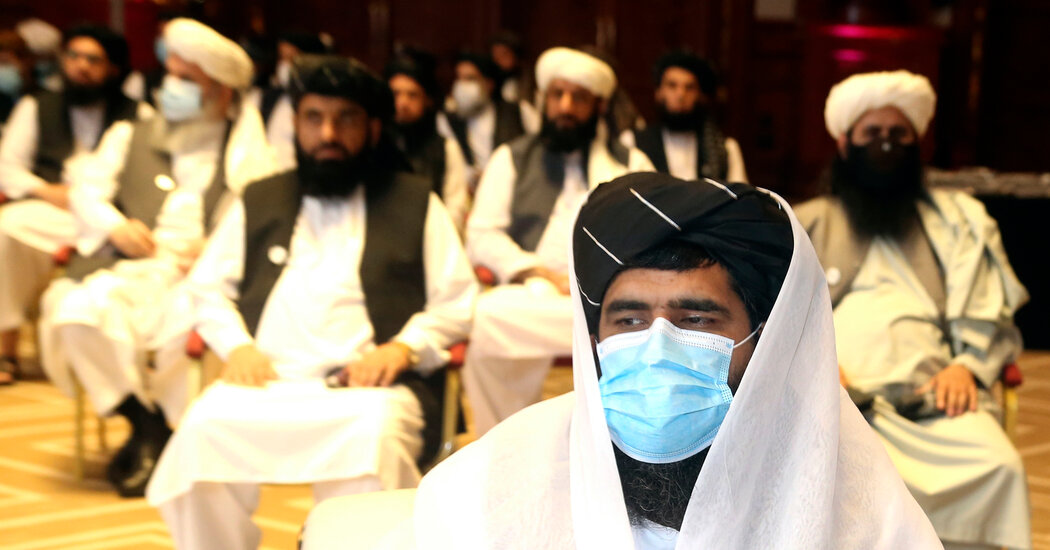 KABUL, Afghanistan — As the major warring parties in Afghanistan sit down for peace talks in Doha, Qatar, an old, unresolved debate is emerging as the central question: What should be the role of Islam in Afghanistan? A humid seaside resort on the Persian Gulf, where the delegates are gathered, has become the unlikely venue for a search for answers acceptable to most Afghans.

The Taliban, who fought for decades to establish an Islamic political system, struck a deal with the United States in February that calls for American troop withdrawals conditioned on the Taliban engaging in peace talks and promising not to allow the country to be used by transnational terrorists.

They started the peace talks on Sept. 12, aware of the difficulty of persuading other Afghans and the international community to accept their understanding of Islam. The Taliban also seem to have reached a conclusion internally that their 1990s model of government is not tenable today.

When the Taliban seized territory across Afghanistan in the 1990s, the group founded a new “Islamic Emirate of Afghanistan,” but they consulted almost none of the country’s diverse political and religious groups. The result was a style of government which enforced at gunpoint the norms and lifestyles of rural southern Afghanistan on the entire country. Imposing an extremely austere lifestyle on Afghans, banning women from work and education and ignoring the pleas of the international community, turned the Taliban into an international pariah.

Establishing an “Islamic system,” of governance is now the thrust of the Taliban’s demands as it negotiates with Afghan officials and representatives of the political opposition. But the Taliban need to clearly detail their ideas about the role of Islam in society and governance.

The country already has a constitution that holds Islamic jurisprudence above all other laws. Afghan officials consider the character of their system sufficiently Islamic. Their emphasis in the peace talks is on protecting the gains of the last two decades, including women’s rights, freedom of expression and electoral democracy.

If peace is going to result from these talks, those two perspectives on what Islamic governance in Afghanistan looks like will need to be reconciled.

What is it about the Islamic Republic of Afghanistan that the Taliban reject so vehemently? The Taliban say the current system was created under the shadow of Western military forces, caters mainly to Western norms and gives an insufficient role to religious authorities.

I have interviewed members of the Taliban and its leadership over many years. They see the Kabul government elites as secularists who seek to Westernize Afghan society. Instead, they see the active promotion of Islamic values and morals in society as one of the primary functions of a “true Islamic government.”

In my interviews, the Taliban cited as un-Islamic the absence of gender segregation in the current Afghan public sphere; they see the relatively free Afghan media as encouraging “moral corruption,” and they object to the banking system designed on international rules and want Islamic banking. They want a greater role for religious leaders in policy and lawmaking and greater promotion of religious education.

Many Afghans fear that the Taliban favor a return to their heavy-handed rule of the late 1990s. It is true that the Taliban are uncomfortable with the liberalizing society — with degrees of freedom of expression, lack of gender segregation and Westernizing influences — that has flourished in some parts of Afghanistan in recent years.

But there are hints emerging from Taliban ranks that they could be influenced by public opinion, perhaps allowing room for compromise. For instance, the Taliban now allow schools for girls in areas under their control where there is strong popular demand. It is a break from their strict rules restricting education for women during their earlier rule.

The Taliban banned technology and communications during their earlier rule. They have since become pretty proficient users of the internet and mobile phone technology, and, in some areas the group controls today, when local elders petitioned for their community’s internet access the Taliban granted it and guarded the telecommunications towers.

The Taliban seem to understand that they need to go further than tolerating girls’ education. Last month, Hibatullah Akhunkzada, the leader of the Taliban, deputed Mawlawi Abdul Hakim, the movement’s senior most religious scholar, to lead the Taliban negotiators in Doha. Mr. Hakim has no experience in political negotiations, but the personal involvement of such an authoritative religious figure seems to suggest that the Taliban intend to clarify their positions on the role of Islam in governance after the actual negotiations start, and that they will want to convince Taliban fighters that any agreement signed by the group’s leaders will uphold Islamic values.

I have gleaned from conversations with Taliban officials recently that they have certain positions for the negotiations, but they have not nailed down a definitive vision of what they will agree to, leaving the specifics to evolve during talks. The Taliban cite the composition of their delegation for the intra-Afghan talks — it includes a deputy leader, the senior most religious figure and over 60 percent of its most authoritative body, the leadership council — as evidence of their seriousness about reaching a deal with their rivals.

A compromise on the state system will most likely require drafting a new constitution for the country. President Ashraf Ghani has already offered the Taliban the opportunity to amend the current constitution, but only through the existing constitution’s amendment procedures, which would give the government control over the process. Afghan opposition political figures and groups have signaled their willingness to consider structural reforms to the current constitutional order while preserving protections for civil and political rights.

Significant questions remain: Would the Taliban accept elections? Would they accept a coalition government? An elected parliament? In recent weeks, the Taliban leaders have revealed that they envision a religious authority at the apex of a future Afghan government — if not the chief executive position, then a body with power to oversee the executive.

Peace negotiations will be strained on questions such as the Taliban’s refusal to accept the current share of women’s participation in public service. Without the Taliban agreeing to a compromise on individual rights and freedoms, an agreement won’t be reached.

In fact, the Taliban’s positions and attitudes stem from Afghan cultural norms as much as they do Islamic doctrine, which influences them in both strongly conservative and relatively progressive directions. The socially conservative views the Taliban espouse are common among rural Afghans, as well as a substantial share of urban educated youth.

Unlike other modern jihadist groups, the Taliban are not fixated on a literalist reading of textual sources. Their movement was born out of a combination of Islamic oral tradition and pre-Islamic cultural norms, and does not have a single ideological document. In fact, that absence of a definitive intellectual foundation in the Taliban has driven some of its more educated radicalized youth to join rival groups such as the Islamic State in Afghanistan.

The absence of core, rigid ideological texts might enable the Taliban to integrate into mainstream Afghan politics. There are many in Afghanistan who are deeply skeptical about genuine change in the Taliban and the prospect of future transformation. But there are no easier ways to test and build on those possibilities than through political engagement in the context of ongoing peace negotiations.

The evolution of the Taliban’s political thinking, though, is likely to be slow. Rushing the negotiations would risk producing an unstable result that only papers over the two sides’ differences; successful negotiations will require not only patience but also a more hands-off approach from other governments than they are usually comfortable with.

The shaping of the post-Taliban Afghanistan by the Western governments, primarily the United States, eventually turned out to be its vulnerability and undermined its legitimacy in the eyes of many Afghans. A new dispensation in Afghanistan will need the support of conservative elements of Afghan society if we want the long war in the country to finally be over.

Borhan Osman is a senior consultant on Afghanistan for the International Crisis Group.

We Asked Four Documentarians: How Does Film Shape the Fight for Racial Justice?

DNA Linked to Covid-19 Was Inherited From Neanderthals, Study Finds

Americans Abroad Wait to See if Mail-In Ballots They Mailed Will...