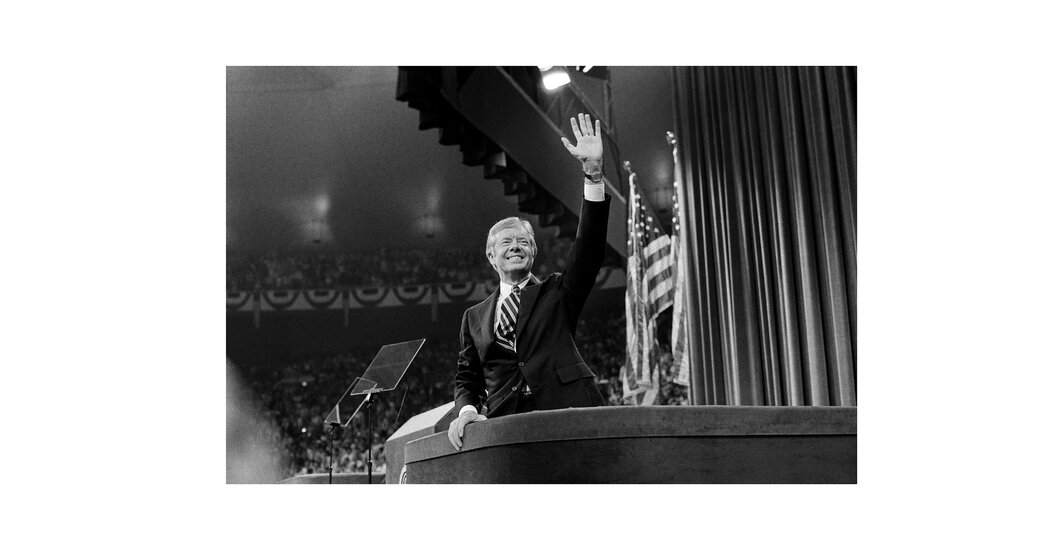 HIS VERY BEST
Jimmy Carter, a Life
By Jonathan Alter

Reading Jonathan Alter’s weighty new biography, “His Very Best: Jimmy Carter, a Life,” one can’t help thinking of a mischievous question: Is it possible to pick a single most humiliating moment of Carter’s presidency?

Was it the day Islamic revolutionaries overran the American Embassy in Tehran, beginning a 444-day captivity drama? When the Soviet Union invaded Afghanistan, effectively restarting the Cold War? When the “misery index” — the unemployment rate plus the inflation rate — scraped 20 percent?

Or would it be a personal embarrassment, as when Carter, having taken up the jogging craze, collapsed during a 10K race in the Catoctin Mountains? When he reported having been attacked by a “vicious-looking, oversized swamp rabbit” while fishing? Or when The Boston Globe mistakenly headlined an editorial about one of his speeches, “Mush From the Wimp”?

No presidency evokes feelings of frustration and missed opportunity more than that of James Earl Carter Jr. Turned out of office after one term amid a cratering economy and a shambles of a foreign policy, deemed too conservative by liberals and too liberal by conservatives, Carter has been orphaned by biographers. He can boast of no Boswell, no library of must-read studies like those that exist for Reagan, Nixon, Johnson or Kennedy.

But this is changing. In 2018, the former Carter aide Stuart Eizenstat published a detailed account of his boss’s career, and the Pulitzer Prize-winning biographer Kai Bird has one in the works. Jonathan Alter’s important, fair-minded, highly readable contribution to this literature provides not just an authoritative introduction to Carter’s feats and failures but also insight into why a man of such intelligence, drive and noble intentions floundered in the White House as haplessly as he did.

The reception of presidential biographies usually centers on how to rank the chief executive in question — a perennial parlor game. Was the president overrated or underrated? Does he merit new appreciation or a thorough debunking? But these evaluative questions are the least interesting ones to ask. More meaningful are analyses that locate a politician in context — that explain how an individual, with a unique character and set of ideas, fared in tackling the nation’s problems at a turning point in history.

In his preface, Alter promises to advance a revisionist brief for Carter’s presidency. And he has some persuasive evidence, including Carter’s “prescience on the environment,” his reintroduction of human rights into foreign-policy making and his appointment of women and minorities to the federal judiciary. But the book is no apologia. It exposes Carter’s weaknesses as well as his undervalued strengths, his reverberating failures as well as his unsung triumphs. Above all, it shows how the qualities that propelled Carter to the pinnacle of American politics also kept him from rising to his historical moment.

A longtime magazine journalist, Alter has written acclaimed books on Franklin Delano Roosevelt and Barack Obama (and an essay for a volume I co-edited about the historian Alan Brinkley, a mentor to both of us). For this biography, he conducted scores of interviews, including more than a dozen with Carter himself. He has sifted through archives, oral histories, unpublished diaries and secondary literature. His assessment of Carter the man — disciplined, driven, stubborn, detail-oriented, technocratic, pious — doesn’t break radically from that of other historians. But Alter keeps Carter’s myriad facets in view throughout, rendering his subject with a depth rarely achieved by political journalism.

Although Carter’s presidency constitutes the heart of the book, Alter spends 300 pages on his pre-presidential years, tracing the formation of Carter’s character and politics. He illuminates the racial climate of Carter’s boyhood in the Jim Crow South of the 1930s — hanging out with friends who were Black while still imbibing the region’s pervasive racism. His stern, conservative father, Earl, “prided himself on treating Black people with what he, in blinkered fashion, considered respect,” Alter writes, while still very much a creature of the white rural South. In contrast, Jimmy’s mother, Lillian, a nurse, was liberal and tolerant, treating Jimmy’s Black friends as equals — although as Alter shows, she too harbored her prejudices. (As late as 1977, she opposed interracial marriage.) When Joe Louis fought Max Schmeling, Earl cheered for the German, Lillian for the Brown Bomber.

These mixed messages about racial difference rippled unevenly through Carter’s early career. At the Naval Academy, cadets mocked the earnest, toothy lad for sticking up for Wesley Brown, their one Black classmate; later, Carter faced down the local White Citizens’ Council in his hometown of Plains, Ga. But he pretty much sat out the civil rights movement, and managed never to meet his contemporary and fellow Georgian, Martin Luther King Jr. Worse, in 1970 Carter ran what Alter calls a “code word campaign” for governor, courting admirers of Alabama’s George Wallace — only to pivot after winning and announce at his inauguration that “the time for racial discrimination is over.” The ensuing encomiums, as much as anything, draped Carter in the credibility he needed to become a presidential contender in 1976.

When Alter reaches Carter’s presidency, the theme of race drops away; economic and foreign issues dominated the agenda and the president’s attention. In these chapters, the imperatives of analytic and narrative history come into conflict. To mount the revisionist argument that he hints at in his preface, Alter would have needed to rely on a more analytical mode. But when it comes to Carter’s unsung policy achievements, he cites or recounts them straightforwardly — the major exception being a riveting chapter on the landmark 1978-79 Israeli-Egyptian peace accords. Alter quotes the Carter aide Frank Moore boasting of some 26 legislative victories on the Hill, including on the environment, Civil Service reform, airline deregulation and more, but those battles receive nothing like the ticktock treatment that Alter gives the Camp David negotiations.

Ironically, when the book hits its narrative stride, it is largely a chronicle of defeat and drift. Alter’s most gripping sections detail such unhappy stories as the hostage saga, the 1979 “malaise” speech (Carter’s awkward rhetorical bid to confront the economic and energy crises), and the primary challenge he faced in 1980 from Senator Edward M. Kennedy of Massachusetts — a challenge Carter repelled, but which dissolved the (provisional) loyalty of many liberal Democrats. In recounting these episodes, Alter digs up forgotten details that make Carter’s travails even more excruciating than we might recall. Who remembers that, amid the Iranian crisis, Islamist radicals also torched the United States Embassies in Islamabad and Tripoli? Carter simply couldn’t catch a break.

Throughout these later chapters, a weary, battered Carter struggles to summon his best self to face historic challenges, but continually runs into the limits of his own experience and character. His impulse to master the details of policy, so often an asset, kept him from trusting others. His fierce moralism, a welcome corrective to past administrations’ realpolitik, prevented him from developing into a geopolitical strategist. Thoughtfulness in making decisions degenerated into dithering. Carter’s approval rating sank as low as 28 percent — Nixon levels — and on Election Day in 1980, he was routed by the former B-movie actor and California governor Ronald Reagan. Twelve years of conservative governance followed, which may stand as Carter’s ultimate legacy.

On Carter’s post-presidency, Alter is also provocatively revisionist. He notes that besides building homes for Habitat for Humanity and monitoring foreign elections, Carter infuriated his White House successors by meddling in their foreign affairs. His exaggerated, one-sided criticisms of Israel tarnished his image as an honest broker in the Middle East.

Yet today at 96, Carter still teaches Sunday school in Plains, drawing hundreds of tourists who sleep in the church parking lot to snare a seat. Few of these pilgrims, surely, consider Carter a Rushmore-worthy president, but they admire what Alter calls his “core decency.” In the lives of even those presidents who falter, after all there is drama and significance, pathos and inspiration — and a welter of experiences that are worth understanding if for no other reason than that they altered the course of our nation.

‘I Was Devastated. Now I Am Emboldened.’