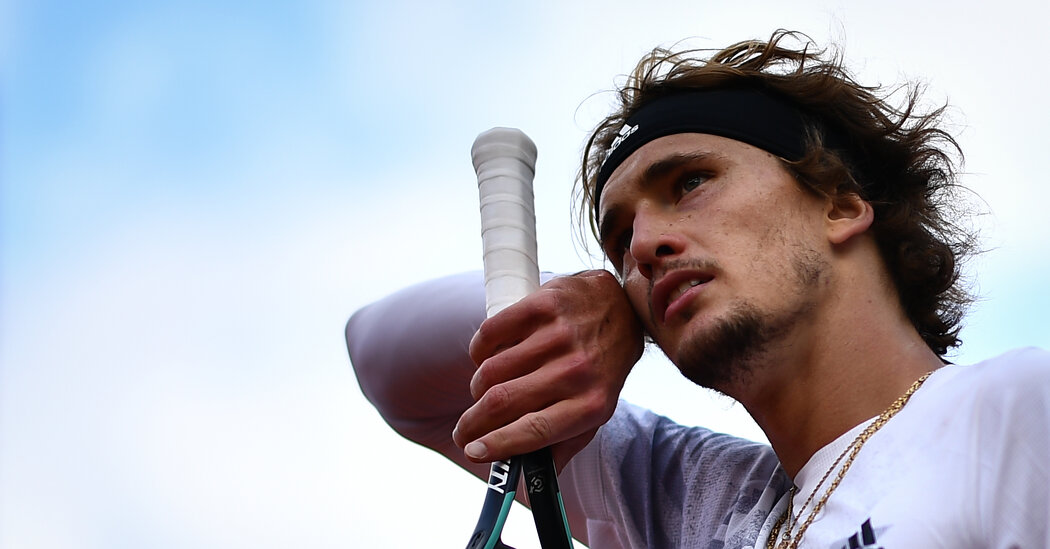 Alexander Zverev lost in the fourth round of the French Open on Sunday, but it became quickly clear after the match that he likely should not have competed at all.

“I’m completely sick,” Zverev said following his four-set loss to Jannik Sinner, taking the unusual step of leaving his black mask on while seated in an empty room at Roland Garros to answer questions from reporters during a videoconference.

“I can’t really breathe, as you can hear by my voice. I had fever as well. Yeah, I’m not in the best physical state, I would say,” Zverev said. “I think that had a little bit of an effect on the match today.”

French Open officials said Sunday that Zverev had not shared the details of his symptoms with tournament doctors as he arrived to play, as required by the event’s coronavirus protocols. It is not clear whether Zverev has contracted the virus — he has tested negative repeatedly, though most recently five days ago — but the episode immediately raised questions about the precautions taken by the French Tennis Federation for a marquee event in a country that has seen an uptick in coronavirus cases and recently imposed tighter limits on large gatherings.

“Zverev is up-to-date on his tests, which have all been negative,” the French Tennis Federation said in a statement. Zverev’s last test was on Tuesday, with the negative result returned on Wednesday, the federation said. “Today he received a reminder for his next test, to be carried out within five days of the previous results,” the federation said. “He did not consult the tournament doctors before his match.”

Zverev consulted with tournament medical officials during the first set of the match who gave him a nasal spray that he used on both nostrils.

Though he competed well, Zverev said after the loss that he regretted taking the court.

“To be honest, I warmed up today: I shouldn’t have played,” Zverev said. “I was hoping maybe for a three-set win or something like that, but I knew from the beginning that it wasn’t going to be easy.”

Sinner, who is scheduled to face the 12-time French Open champion Rafael Nadal in the quarterfinals on Tuesday, said he believed Zverev but didn’t notice his limitations during the match.

“It seemed that he was quite OK, you know, because in the third and fourth set he was running quite a lot,” Sinner said.

Players at the French Open are being tested every five days for the virus. No positive tests have been disclosed since the main draw began last Sunday, though several people tested positive before that.

After initially refusing to answer a question about whether he might have the coronavirus, Zverev, a 23-year-old German player, emphasized during the German language portion of his news conference that he has repeatedly tested negative. He said he was hopeful that he did not have the virus and pointed out that he had not shown some of its symptoms, including a loss of taste.

The answer, listed as “official” in the document, was: “Our medical team must be notified, in accordance with our official sanitary protocol.”

The protocols say that any accredited person suffering symptoms, including a fever or breathing difficulties, as Zverev indicated, should “report to the stadium infirmaries” for a test in a dedicated room.

“Pending the result of the test, the suspected case is excluded from the stadium and required to self-isolate,” the document states.

The tournament’s health and safety guidelines state that its health protocols were based on “calling on a sense of civic duty and responsibility on the part of all attending the event in any capacity.”

Perhaps with that sense of trust as a basis, the French Open has not taken daily mandatory temperature readings for players entering the grounds, as the United States Open did. The French Open’s approach is also less restrictive in terms of access to the main player hotel, which is open to outside guests. Players still in the draw must remain at the hotel when not competing or risk being disqualified, but players who have been eliminated are permitted to come and go while remaining guests. At the U.S. Open, even eliminated players and their team members were required to remain in the official hotels.

Zverev said after his second-round win that the hotel was “not really a bubble” and compared the safety measures unfavorably to the last Grand Slam tournament in New York.

“In the room next to me, there’s guests, regular guests, staying there with souvenirs every single day that they come, from the Eiffel Tower and stuff like that,” Zverev said last week in Paris. “Yeah, you can’t compare the two. New York has impressed us players. Here they have not done too much.”

Players and coaches also have complained that they have sometimes not received their results in Paris after coronavirus tests.

Zverev has had several close brushes with the coronavirus previously. He was one of the players at Novak Djokovic’s ill-fated Adria Tour, which was ultimately suspended after several players tested positive. Zverev said he tested negative after the event, but drew criticism days later for attending a mask-free party near Monte Carlo, reveling among a throng of people when he had said he would be following doctors’ protocols.

Zverev’s parents also tested positive for the virus in August shortly before the U.S. Open, which prevented them from traveling with him to New York, where he lost in the final to Dominic Thiem.

Cruise Ships Can Sail Again, With Strict Rules. Here’s What to Know.

Cruise Ships Can Sail Again, With Strict Rules. Here’s What to...