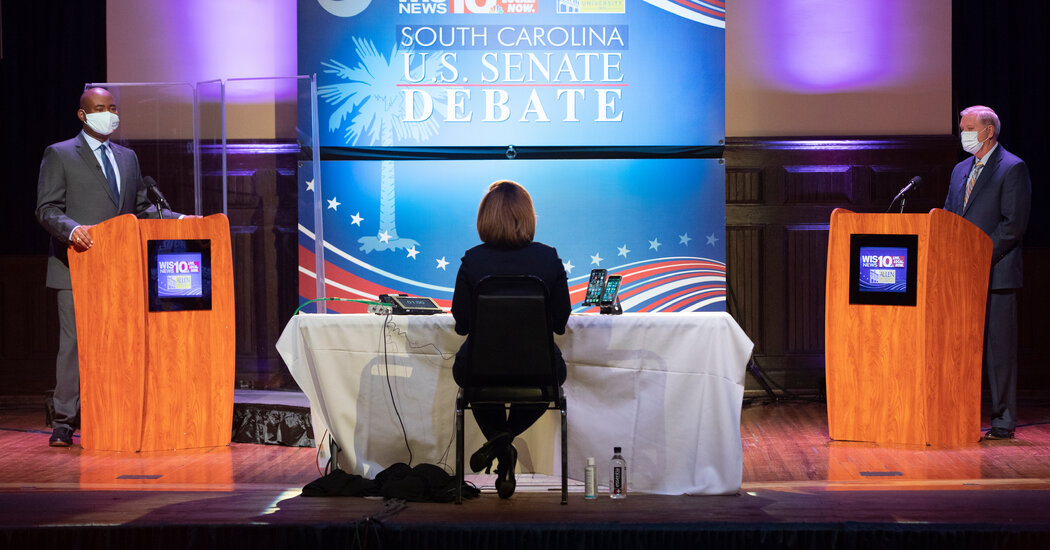 Four days after a debate in which President Trump might have exposed Joseph R. Biden Jr. to the coronavirus, South Carolina’s Democratic Senate candidate, Jaime Harrison, brought a plexiglass divider to his debate with Senator Lindsey Graham.

Mr. Harrison mentioned the divider directly during the debate on Saturday, saying he needed to protect himself for the sake of his family.

“Tonight I am taking this seriously,” he said. “That’s why I put this plexiglass up. Because it’s not just about me — it’s about the people in my life that I have to take care of as well. My two boys, my wife, my grandmother.”

Mr. Graham, the chairman of the Senate Judiciary Committee, may have been exposed to the virus earlier in the week by Senator Mike Lee of Utah, who serves on the committee and has tested positive. While Mr. Graham has tested negative, it can take several days for an infection to become detectable, and the Centers for Disease Control and Prevention instructs people to quarantine for 14 days after exposure.

The race between Mr. Graham and Mr. Harrison, in a state that voted for Mr. Trump by more than 14 percentage points, has been unexpectedly competitive, with multiple polls showing the candidates tied or nearly tied.

Republic Day 2021: From no chief guest this year to parade timings and venue, here are all the details

From 47 Primaries, 4 Warning Signs About Voting in a Pandemic

Republic Day 2021: From no chief guest this year to parade...