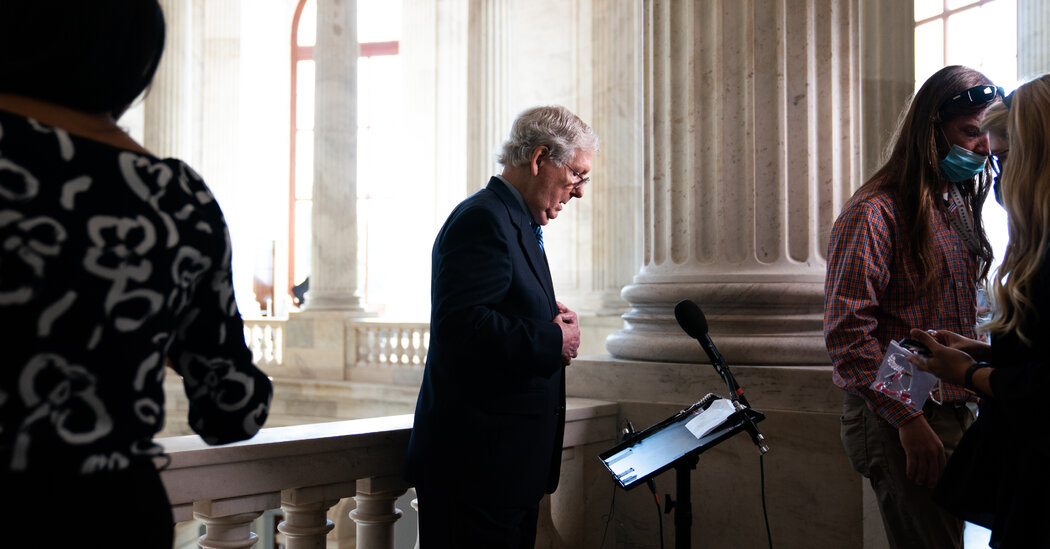 Mitch McConnell, the Senate majority leader, announced on Saturday that the Senate would not meet as planned next week after three senators tested positive for the virus, but indicated that Republicans would press ahead to confirm Judge Amy Coney Barrett to the Supreme Court without delay.

“The Senate’s floor schedule will not interrupt the thorough, fair and historically supported confirmation process previously laid out,” Mr. McConnell, Republican of Kentucky, said in a statement, adding that the Senate Judiciary Committee had “successfully” met with senators appearing both in person and virtually since May.

The announcement comes after three members of Mr. McConnell’s conference, two of them on the Judiciary Committee, have tested positive for the coronavirus in the past 24 hours. Others, like Senator James Lankford of Oklahoma, have tested negative but have gone into quarantine.

Ron Johnson of Wisconsin, the third Republican senator to test positive for the coronavirus this week, was exposed to an individual earlier in the week who tested positive for the virus, according to his office, which said the senator was “not experiencing symptoms.” He did not attend President Trump’s nomination ceremony for Judge Barrett at the Rose Garden on Saturday.

Unlike Senators Thom Tillis of North Carolina and Mike Lee of Utah, who tested positive on Friday, Mr. Johnson does not sit on the Senate Judiciary Committee. But his positive test result adds new complications to the timing of Judge Barrett’s confirmation.

“If it’s too dangerous to have the Senate in session, it is also too dangerous for committee hearings to continue,” Senator Chuck Schumer of New York, the Democratic leader, said in a statement. “Leader McConnell and Chairman Graham’s monomaniacal drive to confirm Judge Barrett at all costs needlessly threatens the health and safety of senators, staff and all those who work in the Capitol complex.”

The Sept. 26 Rose Garden ceremony for Judge Barrett was most likely not a “super-spreader” event, because it was outdoors. However, many top Republicans attended without masks or social distancing, raising concerns that others might have contracted the virus but had not yet been diagnosed. And someone who was infected and did not have symptoms could have transmitted the virus to others during indoor discussions inside the White House.

But leading Republicans have said they planned to continue “full steam ahead” to confirm Judge Barrett before Election Day.

Senator Lindsey Graham of South Carolina, the Judiciary Committee chairman, said on Friday that his panel would begin four days of public hearings on Judge Barrett’s nomination on Oct. 12, as scheduled. Mr. Tillis and Mr. Lee said they would isolate for 10 days, which would enable them to emerge in time for the hearings.

And in an interview on Friday, Mr. McConnell suggested that the virus’s spread through Republican circles could mean that more lawmakers would participate in the hearings virtually. “This sort of underscores the need to do that,” he said.

But Democrats said that virtual hearings on such a consequential matter would be unacceptable.

Republicans hold a narrow majority in the Senate, meaning they can only afford to lose three votes in their push to confirm her. Two Republicans, Senators Lisa Murkowski of Alaska and Susan Collins of Maine have said they would not confirm a nominee before the election.

Seeing Ourselves in Bloom

A Single Session of Exercise Alters 9,815 Molecules in Our Blood