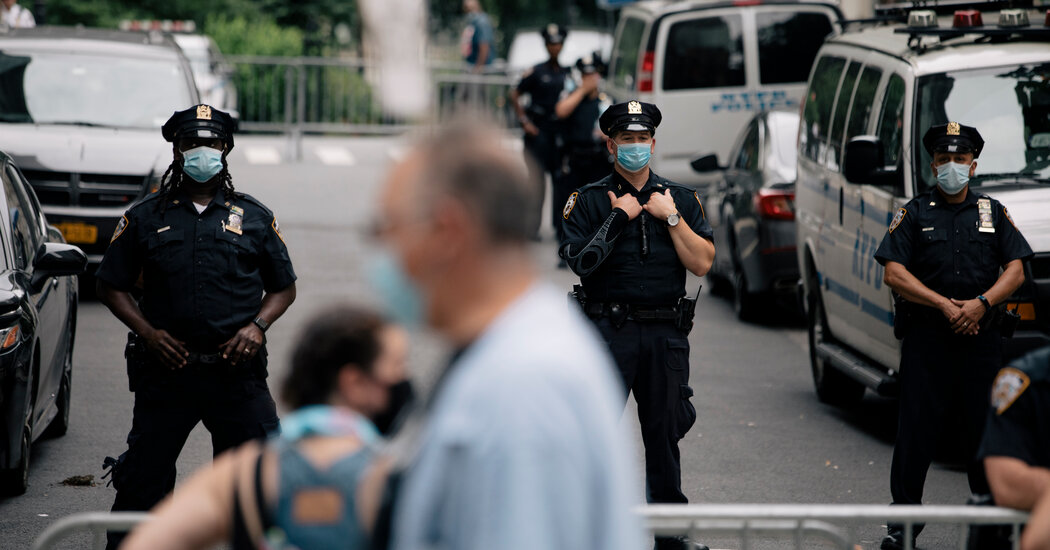 New York City police officials instructed all officers to wear masks in public or risk discipline, as the department faces mounting criticism over officers’ failure to comply with a state mandate that people wear face coverings in public when social distancing is not possible.

The Police Department’s directive, issued on Friday in memos and a video, came after elected officials repeatedly called out the police for flouting the mask mandate they are supposed to enforce. About 400 officers have been assigned to nine neighborhoods in Brooklyn and Queens where there has been an uptick in coronavirus cases and where the city plans to close nonessential businesses and schools this week.

Terence A. Monahan, the chief of department and the highest-ranking uniformed officer, appeared in a video sent to officers on Friday instructing them to wear masks in public areas, department facilities and where they cannot be socially distanced.

“It is our responsibility to set the example for our great city and do everything we can to help ensure that we do not have another hospitalized member bring this deadly infection into our homes or have another funeral,” he said.

A memo sent later in the day added that the requirement applies to shared offices, elevators, halls and bathrooms, and at all times in the first 14 days of an officer’s return from places with a travel advisory. But officials carved out exceptions when officers are eating and drinking, adjusting their masks or having difficulty breathing.

A second memo, first reported by The New York Post, also warned that officers who did not follow the rules could face disciplinary action. The memo did not specify how officers might be punished, but the department has options ranging in severity from verbal or written warnings up to suspension or termination.

Gov. Andrew M. Cuomo criticized the police last week for ignoring the mask mandate. And Mayor Bill de Blasio, who has been dismissive for months toward complaints about officers not wearing masks, said last week that there should be penalties for those who do not comply.

Police officers’ failure to wear masks has been a point of tension since the spring, when they were initially made responsible for enforcing social-distancing measures. During mass protests that erupted in the city after the police killing of George Floyd in Minneapolis, thousands of officers assigned to the demonstrations did not wear masks.

The Civilian Complaint Review Board, which investigates complaints from the public about officer misconduct, said on Sunday that it had referred 156 complaints about officers who failed to wear masks to the Police Department since March. It was unclear if the department disciplined any of the officers involved.

Attention returned to the police last month as coronavirus cases began rising again in the city, and the mayor announced that officers would once again be told to enforce masking and social -distancing requirements.

Governor Cuomo complained on Sunday that local officials were not doing enough to slow the spread of the virus in the hot spots and threatened to close all business activity in those areas if local governments did not step up. Last week, he threatened fines of up to $10,000 a day for lax enforcement.

The directives from the Police Department were issued hours after President Donald Trump revealed that he had tested positive for the coronavirus. But Chief Monahan, in the video, said the reminder was timed ahead of a memorial service scheduled on Monday in Manhattan for 46 police department employees who died from Covid-19.

At the peak of the pandemic, almost 20 percent of the department’s 36,000 officers were out sick. Many continue to test positive for the virus, Chief Monahan said in the video.

Over the weekend, compliance among officers was mixed. Twitter users shared photos after the directive went out showing officers in Times Square and other locations who were not wearing masks. Patrick J. Lynch, the president of the Police Benevolent Association, spoke at a Republican rally on Saturday on Staten Island where organizers did not require masks and many in the crowd did not wear them.

“We understand the seriousness of it, but the nature of our job makes it difficult to always think first of the mask,” said Mr. Lynch in an interview with NY1, a local television station.

A police officer outside the 10th Precinct station house in Chelsea around noon on Sunday was wearing a mask as she stood guard at the entrance. But a stream of officers and detectives entering and leaving the station did not wear anything over their faces.

In Washington Square Park in Manhattan, Maya Carmosino, 23, said the majority of officers she had seen during the pandemic had not been wearing masks or were not wearing them properly over their noses and mouths. Although she was hopeful that the directive would change officers’ behavior, she remained skeptical, she said.

“It’ll be great if they’re not hypocritical,” Ms. Carmosino said.

Moe Singleton, 31, of the Prospect Heights neighborhood of Brooklyn, said he did not think the police were wearing masks more or less frequently than anyone else. He said he has seen people across the city, officers and not, wearing masks improperly — “as headbands, on their elbows, as chin hammocks” — or not at all.

Still, Mr. Singleton, who moved to New York a year ago from Richmond, Va., thought that the police should be held to a higher standard when it came to mask compliance, since they were enforcing the law.

Jim McShane, 69, who lives in the Riverdale neighborhood of the Bronx, sympathized with officers as he rode his bicycle in Manhattan on Sunday. He said he did not think that they should be held to a higher standard.

“They’re human,” Mr. McShane said. “I mean, masks can be uncomfortable or hot or you’re thirsty or something.”

No decision yet on re-opening of schools, says government sources

A Teenager Hosted a Graduation Party. Then 2 Gunmen Showed Up.