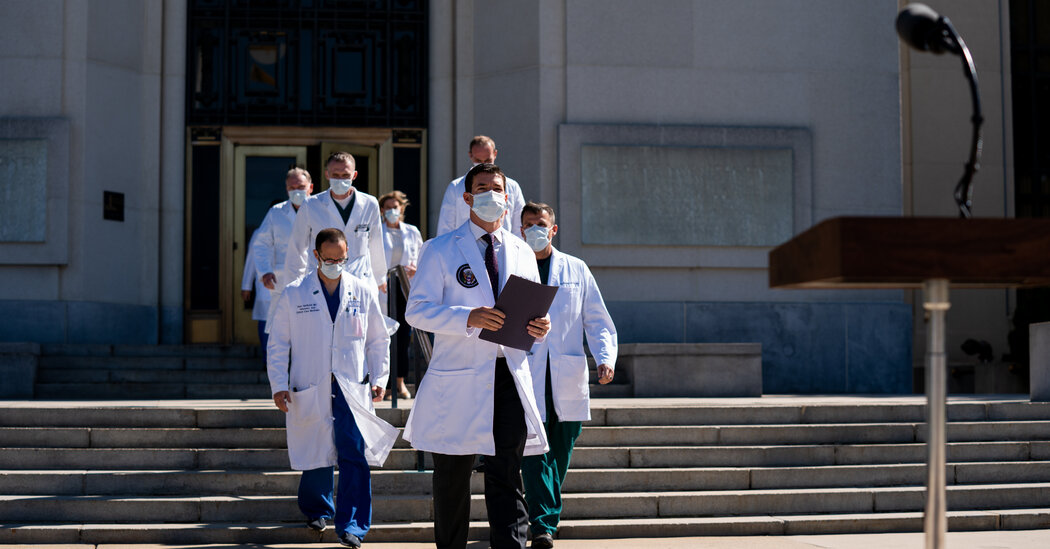 When Dr. Sean P. Conley delivered a briefing at Walter Reed National Military Medical Center on Saturday, it seemed intended less to inform the American public than to satisfy the public relations demands of a famous and famously demanding patient — President Trump.

“He’s doing great,” Dr. Conley said. But moments later, the president’s chief of staff, Mark Meadows, speaking off camera and on the assumption he would not be identified, offered a contradictory assessment, noting “the president’s vitals over the last 24 hours were very concerning, and the next 48 hours will be critical in terms of his care.”

“We’re still not on a clear path to a full recovery,” he added.

The radically different message was stunning, and at first attributed, at Mr. Meadows’s insistence, to “a source familiar with the president’s health” speaking on background, but later identified as the chief of staff himself.

Mr. Trump posted a video to Twitter on Saturday evening, offering his own account of his health. “I’m starting to feel good,” he said, adding “we’ll be seeing what happens over those next couple of days.”

The discordant statements were a revealing insight into the dynamics behind the Trump White House’s frequent release of misleading information, particularly about the president’s health. Dr. Conley is a Navy doctor and Mr. Trump is not only his patient but his commander in chief. The president is known to be especially interested in presenting his health in the best possible light, and his health has never been an issue the way it is now.

For Mr. Meadows, the clarification appeared to be an effort to lay some groundwork for the possibility that Mr. Trump’s condition could worsen, raising the prospect of a potential transfer of power to Vice President Mike Pence under the 25th Amendment.

But the net result of the two conflicting accounts was that in the middle of a pandemic and election that have accentuated the distrust of the government by both left and right, the American public does not have a definitive answer to the condition of the first president to be hospitalized since Ronald Reagan.

The West Is Split on China. It Needs to Come Together.

I Am the C.E.O. of Uber. Gig Workers Deserve Better.