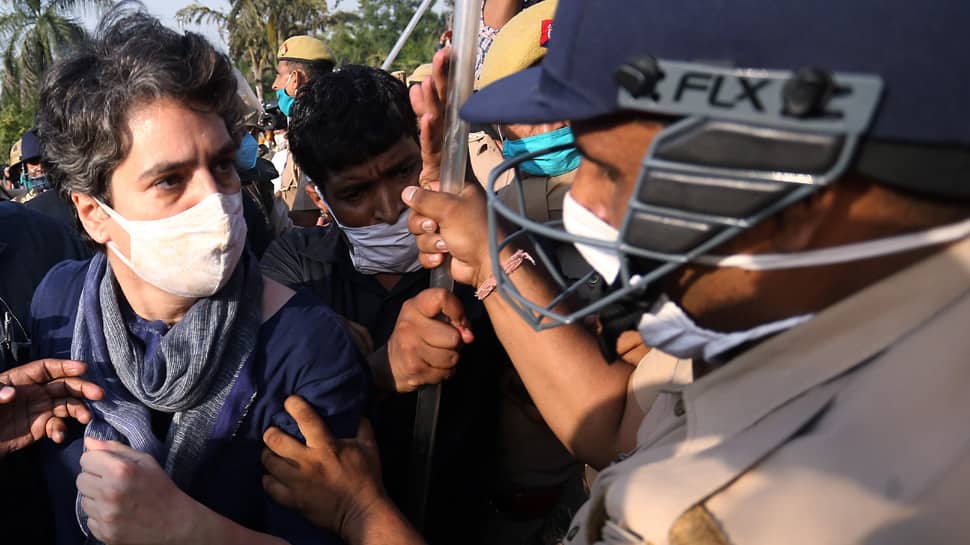 Congress leader Priyanka Gandhi Vadra was pushed and manhandled on Saturday (October 3) while she came to the rescue of a party worker, who was being lathi charged by Uttar Pradesh police at the Delhi-Noida Direct (DND) Flyover when Priyanka, Rahul Gandhi and several Congress workers were trying to go to Hathras to meet the family of gang-rape victim.

The videos captured during the commotion shows Priyanka jumping a police barricade to shield a Congress worker as cops with lathis surrounded the man.

The Uttar Pradesh police resorted to mild lathi charge after the Congress workers refused to listen to police’s request to vacate the DND flyway even after Priyanka, Rahul and three other Congress leaders were allowed by Uttar Pradesh government to visit Hathras to meet the family members of the victim.

The UP Police resorted to lathi charge after the Congress workers refused to leave the DND flyway even after five Congress leaders were allowed to visit Hathras to meet the family members of the victim.

There is no greater strength than a woman fighting for justice. #SatyagrahaForOurDaughters pic.twitter.com/WATQvJXvlv

Soon after getting the permission from Uttar Pradesh police, Rahul Gandhi climbed on the rooftop of his car and informed the Congress workers that five Congress leaders had been allowed by the state government to meet the Hathras gang-rape victim’s family.

But Rahul’s request failed to cut any ice with the Congress workers who wanted to accompany the former Congress president and Priyanka to Hathras. As soon as Priyanka and Rahul’s vehicle reached the toll area of the DND, the police started lathi charge to disperse the remaining Congress workers.

Sensing that the police was using force against Congress workers, Priyanka got down from her vehicle and rushed into the crowd to protect a party worker.

In a video shared by the Congress on its Twitter handle, Priyanka can be seen holding the arm of the Congress worker and pulling him away from the crowd to shiled him from the police’s action.

Rahul and Priyanka then moved towards Hathras and met the victim’s family for around an hour. Talking to reporters, after the meeting, the Congress leaders that the party will continue its fight for justice to India’s daughter.

“I met the afflicted family in Hathras and understood their pain. I assured them that we stand with them at this difficult time and will help them in getting justice. The UP government will not be able to do anything arbitrary as it wants, because now the whole nation is standing united demanding justice for the daughter of the country,” Rahul Gandhi tweeted in Hindi, after meeting the gang-rape victim’s kin.

What Happens When a Virus Crackdown Cuts Right Through a Neighborhood