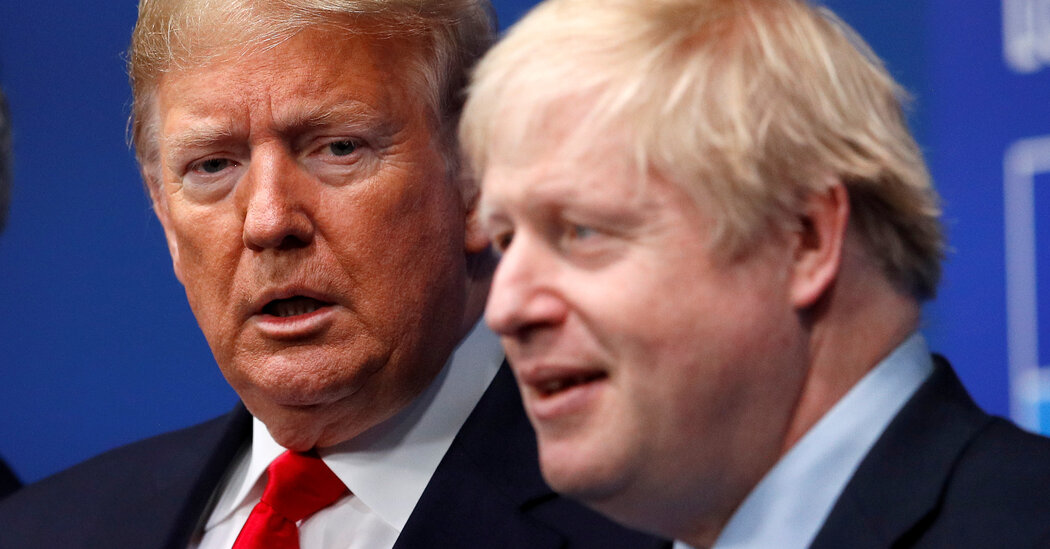 America, we’ve been here before you. We know what it is like to have a country’s leader downplay the virus, ignore safety measures inside their work space, assume health restrictions are for the little people, and then become ill. We know what it’s like to be pitched into fearful political uncertainties; who’s making the decisions in a crisis, and what are the consequences for us if a leader is incapacitated?

President Trump could have drawn some lessons in caution from Boris Johnson’s hospitalization this spring. Instead we have history repeating itself, on a short-circuiting loop, but in both these cases, far too grimly to be described as farce.

Just like Mr. Trump, a complacent Mr. Johnson failed to treat the virus with the seriousness it required from the start. As the virus was spreading across the world in February, with scientists desperately warning of its dangers, and Italy already in a state of emergency, Mr. Johnson did virtually nothing. His government’s crisis committee met several times to discuss the threat, but he didn’t bother turning up. Instead he disappeared from public view for at least 10 days, much of it on holiday with his pregnant girlfriend.

Once Mr. Johnson did address the problem, he confused the public by not taking his own government’s official advice. On March 3, just as the pandemic was taking off in Britain, Italian cities were in lockdown and their hospitals overwhelmed, he advised the nation to start obsessively washing their hands. At the same press conference, he boasted cheerfully that he had been shaking hands at a hospital containing Covid patients days before, that he was proud to say he continued to shake hands, and that everyone should feel free to make up their own minds about what to do.

Mr. Johnson and his team continued to work in close physical proximity as if the rules of contagion didn’t apply to them. So it came as a surprise to them when the virus suddenly erupted in Downing Street at the end of March, taking down the prime minister, the health secretary, the chief medical officer, and the prime minister’s chief adviser, all at once.

The shock waves were immense. This was a critical moment for Mr. Johnson because it left the country rudderless and it raised the fundamental issue of leadership. If the most powerful figure in the country couldn’t protect himself, how could he possibly keep the population safe? The political imperative was to underplay the seriousness of the prime minister’s condition at every stage.

Every deterioration was hidden until it could not be ignored. Every platitude was deployed. It was only a mild case, he would soon be fighting fit, he was still running the country. Even when he was rushed to the hospital, we were told he was still working, still in charge. Even when he went into intensive care we heard he was in good spirits. It was only after he left the hospital that Mr. Johnson claimed in fact he might have died, that there had been a day or two “when things could have gone either way.”

In saying this, Mr. Johnson was appealing to sympathy. Having survived, the narrative became that he was a fighter, a man who had defeated an unknowable enemy, a man who had suffered for his country, a man whose earlier errors in the pandemic should be forgiven. This bought him political capital for a time. It hasn’t lasted. His approval rating with the public has tumbled; two-thirds thought he was doing well in April; only a third do now.

Mr. Johnson’s reputation has collapsed for just the reasons that threaten President Trump’s political survival now. Both men’s weaknesses have been forensically exposed by the pandemic. They are both careless egotists who can’t be bothered to do the work their roles require. They fought for the top job not because they hungered to do something for their country, but because of what the job would do for them; filling a psychological void within.

None of their voters expected either man to be on top of the details of government. They assumed that would be delegated to competent underlings. What they were attracted to was the ebullience, charisma, energy and raw power that these politicians embodied.

Now Mr. Johnson’s own illness has cost him even that. He seems a diminished figure, often visibly tired, bewildered, aggrieved or inarticulate when he’s publicly challenged by the press or in the Commons. He is said to lose track in meetings and to forget what he’s been briefed. His policies on the virus have swung all over the place, to the fury and bewilderment of many of his colleagues and the country. His best asset, his powerful personality, has been punctured, and nobody knows whether it can be revived.

The prime minister at least has time on his side. It is four years to the next election. President Trump has only four weeks. He was already trailing in the polls. He cannot afford to come across as weak. His chances now turn on the outcome of his illness. His primary appeal, vividly on display in last week’s debate, is his energetic vengefulness, aimed against Joe Biden’s feeble decency. Without that dominance, which is both a threat and a promise, it is difficult to see how he can win.

Indeed, a virus that both leaders shrugged off as neither a personal nor a political threat may yet bring them down.

Jenni Russell (@jennirsl), a contributing writer, is a weekly columnist at The Times of London, where she writes about politics, society and other topics.

Not Everyone Hates School at Home