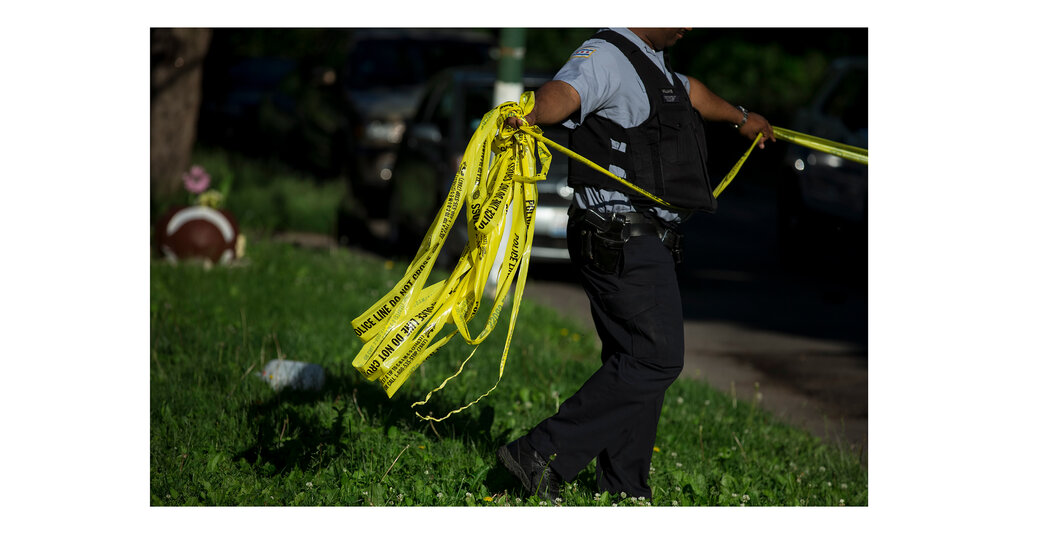 As I thought about writing this review, I imagined an opening paragraph summarizing the events of this summer’s nationwide protests against police violence. How observers and participants parsed the civil unrest along the familiar lines of peaceful protesters, rioters and looters, drawing competing moral distinctions between nonviolence and violence. How the police deployed official violence to punish and intimidate activists. How heavily armed, self-deputized white men threatened and used vigilante violence against demonstrators. How President Trump called for state violence against human beings to protect property. And how the residents of many cities committed acts of violence against their intimate partners, neighbors and fellow citizens, including small children.

And then, after finishing Elliott Currie’s “A Peculiar Indifference: The Neglected Toll of Violence on Black America,” a smart, timely, deeply disturbing and essential book by a veteran scholar and leading expert on the criminal legal system, I realized that the details of every precious life harmed or lost this summer reveal a bigger truth about the nation. Whether the hand that pulls the trigger belongs to a white cop or to a Black citizen, the extraordinary violence against Black lives, Currie argues, is a consequence of the nation’s refusal to address the “longstanding structural roots of violence.”

White domination rests at the center of this maelstrom of enduring and endemic violence. And yet, whether most white Americans admit it or not, they consider Black people both the deserving victims and the dangerous vectors of violence, who bear the burden and the blame for much of the nation’s exceptional record of death and destruction.

Currie’s book is the first comprehensive study to present a meta-analysis of peer-reviewed research — a study of studies — showing how anti-Black racism in the form of state and private violence upholds “an essentially exploitative and discriminatory social order.”

Conventional wisdom is that the extremely wide disparities in gun violence and homicide rates by Black people compared with white people is not a function of systemic racism and structural inequality. After all, there are many more poor white Americans, with much lower violent crime rates on average than in Black communities. Material poverty therefore is not the issue; moral poverty is, or so the thinking goes. Among some Black community residents and white conservative commentators alike, as well as a silent majority of moderates and even some liberals, many people believe the real problem is a cultural one. “Black-on-Black” violence can only truly be solved, in this view, when the Black community takes responsibility.

This is hardly a new debate. My entire career for over 25 years, and much of my lived experience, has been shaped by this issue. And while research has often been mixed with structuralists and culturalists battling it out in the pages of academic journals, there’s never been much doubt in the realm of public opinion or American politics about whom to blame for the fact that violence is the eighth leading cause of death for Black citizens compared with the 20th for non-Hispanic white ones. Or the fact that 21-year-old Black women are twice as likely as 21-year-old white men to die of homicide. Or the fact that well-educated Black men have a 30-fold higher risk of being murdered than similarly well-educated white men. If young white men died at the same homicide rate as young African-American men did in 2018, the number of deaths would have equaled 14,000 instead of 930.

This is not a Black crisis but a national emergency, according to Currie. In a society where “intentional violence” of all kinds exists more than in “any other advanced nation,” he writes, “African-Americans suffer it all out of proportion to their share of the population.”

How did this happen and why has this emergency endured? He gives three intertwined explanations: the “economic dispensability of poor Americans of all races in an increasingly heedless global economy”; the lack of political influence in Black communities that “suffer violence the most”; and “the spread of a punitive and austere culture” that extracts and exploits low-income people.

Currie debunks the idea that violence is rooted in Blackness by turning to research that links economic inequality, poverty and disadvantage to higher violence rates in low-income white communities than in higher-income white communities. In a well-known 1996 study of census tracts in Columbus, Ohio, the sociologists Lauren Krivo and Ruth Peterson were able to show that greater poverty levels among white residents led to higher violence rates. Since their study included Black residents, they also found that regardless of race “higher levels of community disadvantage predictably generated higher levels of violence.” For Black people violence is more acute because, per capita, more of them are impoverished. But such comparative research has been hard to reproduce. A follow-up study in Atlanta couldn’t find a sufficient sample of white people as dirt poor as their Black counterparts to fully test Krivo and Peterson’s results.

But class and economic inequality are not the whole story and never have been. Going back to the field-defining work of the African-American sociologist W. E. B. Du Bois at the turn of the 20th century, the problem of greater rates of Black crime, he calculated, was capitalism plus racism. Low-income white people with higher crime and violence rates relative to higher-income white people experienced economic insecurity, but not the added burden of systemic racism. Excessive rates of Black violence were caused by prejudice and a common belief that “the Negro is something less than an American and ought not to be much more than he is,” Du Bois wrote.

Today’s educational segregation, real estate steering, predatory banking, health care discrimination and “community” policing amount to daily forms of systemic racialized oppression that low-income white people do not experience. And once upon a time, when these systems did prey on persecuted and despised Irish and Italian immigrants, their rates of crime and violence were much higher than their native-white peers.

Sometimes Black and white conservatives wax nostalgic about the Jim Crow period to counter the evidence of systemic racism today. They use history to evoke a false past of a law-abiding, respectable Black community with little crime before welfare and liberalism corrupted Black people. The idea being that in the face of old-school, real racism, Black people did not succumb to violence. And yet, as Currie highlights, Du Bois said while in Philadelphia that he “lived in the midst of an atmosphere of dirt, drunkenness, poverty and crime. Murder sat on our doorstep, police were our government and philanthropy dropped in with periodic advice.”

In many places long before the War on Poverty supposedly corrupted the morals of Black America, a slew of researchers found high rates of violence. In Richmond, Va., 88 percent of murder indictments between 1930 and 1939 “involved Blacks killing Blacks,” Currie notes, citing the work of Guy B. Johnson. “The same was true of 75 percent of murder indictments in North Carolina.” With circumstances this bad a century ago, white segregationists’ howls of Black rapists and murderers in their midst must have been right all along, or so it seems.

The great insight of Currie’s book is tracking historically how systemic racism — what the researchers John Dollard and Allison Davis called caste in the 1930s and 1940s — was an accelerant for violence within Black communities. Caste, they argued, prevented Black people from directing their aggression toward the state or from mobilizing politically against the white citizens who subordinated them. Community violence became both a normal and expected response to the alienating effects of anti-Blackness and the disabling effects of the majority population’s monopoly on power and violence.

In this system, some people comply, others pursue a higher-class status within the caste and still others turn inward. Dollard explained that “some of the hostility properly directed toward the white caste is deflected from it and focused within the Negro group itself.” Internecine violence and “disunity” made the “Negro caste … less resistant to the white domination,” Dollard wrote. “Evidently, the whites did not consider security of life and person for the Negroes a very important issue.” In the 1960s, the researcher Kenneth Clark described America’s ghettos as internal colonies. The violence within was an expression of the powerlessness of people who killed their “friends and relations,” he wrote. “This may mean that the victim of oppression is more prone to attack his fellow victim than to risk aggression against the feared oppressor.”

Near the height of the crack epidemic and drug wars of the 1980s, the sociologists Judith and Peter Blau confirmed the findings of the pre-civil-rights-era researchers. As Currie observes: “Violence, then, was not just a reaction to material deprivation. It was nurtured by the sense of ‘injustice, discontent and distrust’ generated by the highly visible reality that other people were doing better not because they were worthier but because they were, in this case, whiter.”

Of course, the paramount question that remains is, what role have the police played in all of this? Keep in mind, Currie wrote this book well before Breonna Taylor and George Floyd were killed. It should come as no surprise that Currie finds no evidence that the police can help. Just the opposite. All efforts to “obtain personal security,” he writes, fail in a “world where the institutions that are, in theory, supposed to supply it are either incapable or unwilling to do so.”

Policing has long been the sharp edge of a political sword used to cut the heart out of Black resistance. Policing is not only oppressive. It is causal and symptomatic of the conditions in which violence thrives. The very instrument that reproduces anti-Black racism cannot be the same tool that saves Black people. “A dysfunctional, punitive and reactive criminal justice system,” Currie states, “helps to breed violence not only by what it does to people but by what it does not do — not only through the ways in which it actively harms people, but through what it passively fails to do for them.” Since the end of slavery, law enforcement officials “have not only failed to reliably protect Black Americans against violence in their communities but, all too often, have contributed to it.”

This summer the activist and author Kimberly Jones articulated with equal parts reason and rage what Currie’s book seeks to expose and end. Standing outside of a boarded-up store in the midst of Atlanta’s civil unrest, she explained that Black people couldn’t burn down their own communities because “we don’t own anything.” She continued: “You broke the contract when you killed us in the streets. … You broke the contract when for 400 years, we played your game and built your wealth. … As far as I’m concerned they can burn this bitch to the ground and it still wouldn’t be enough. And they are lucky that what Black people are looking for is equality and not revenge.”

So, what now? In his final chapter, called “Remedies,” Currie doesn’t cover new ground, but by linking public investments to violence reduction, he is, in effect, joining the activists calling for defunding the police by reinvesting in the most disadvantaged communities. His solutions include a jobs guarantee with living wages and meaningful work. He calls for huge investments in hiring to rebuild the public infrastructure of schools, hospitals, transportation and environmental remediation akin to a Green New Deal for Black America.

But it’s up to white Americans to make this choice.

SC denies permission to carry out Muharram procession across nation