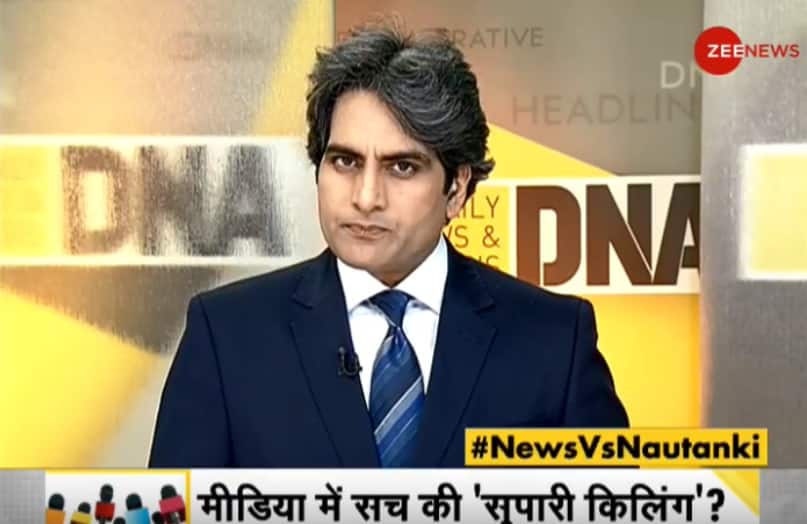 New Delhi: People are fast losing faith in the sacrosanct image of media, which, of late, witnessed a decline. The rat race for TRP and fake news have further added to its trust deficit among common people. The DNA analysis will look into the different aspects of the news industry to unravel the root cause amid the two recent developments of the Hathras incident in Uttar Pradesh and Bollywood actor Sushant Singh Rajput’s alleged suicide case.

In the both these cases, the effort should have been to let the truth come out through media reports, but in the name of TRP, and concoction of fake news a competition ensued to grab the maximum attention of people, and in an effort to provide justice to victims, the news organisations started toeing their own lines floating different theories to serve their interests.

It was earlier stated that the pen is mightier than the sword, but this power has gradually declined. Now, the dramatic element has made a silent entry into journalism. News is simply reduced to just grab TRP and the fake news has further weakened the fourth pillar of democracy. Along with this fourth pillar, other pillars too are witnessing a decline.

In the cases of Sushant Singh Rajput and the death of an 18-year-old girl in Hathras, the demand of these families to get justice for the victims should have been the basis of reports, but the developments in media are just going in opposite directions.

In the case of Sushant Singh Rajput, the FIR registered in Patna nowhere mentioned murder and even Sushant’s family did not say this but a section of media is determined to prove it a case of murder. In the other Hathras case, however, no medical report confirmed rape, but a section of media here also wants to prove it a case of gang-rape at any cost. The fact is that the statement of the girl about rape came later and the police then amended the FIR, but the investigation is yet to prove it.

By ignoring facts, this business of lies is on an expansion spree to grab maximum TRP. The virus of untruth is spreading very fast and people remain a mute spectator. This change is deadly and is likely to hit the future of our nation.

We will talk about it, but first, you should know the latest updates in the Hathras incident. The Uttar Pradesh Police has registered several FIRs in this case, citing a deep conspiracy to trigger caste-based violence in the state. The FIR has also named a section of media, an unknown leader for spreading rumours on social media along with some politicians for allegedly luring the family to give Rs 50 lakh.

According to the FIR, some people are repeatedly talking about rape in the media and social media while rape has neither been confirmed in the forensic investigation nor in the medical report.

The Uttar Pradesh government has recommended a CBI inquiry into the matter, but the victim’s family, surprisingly, does not want it. They, rather, demanded that the investigation should be conducted under the Supreme Court’s supervision.

Although a section of media and political parties are striving hard to give the Hathras incident their own colour, Zee News has tried to unravel the truth completely on the basis of facts and evidence. The investigation says that there was an old acquaintance between the victim and the main accused, Sandeep Singh, and perhaps there was a conversation between them.
This has been proved through the call data records, comprising approximately 5 hours from October 2019 to March 2020, but the victim’s elder brother flatly refused to have ever talked to the key accused.

The question arises if the brother did not talk then who would have talked to the accused. In our further investigation, some Boolgarhi village residents hinted towards a possible love affair between the accused and the victim. The family members of other accused talked about the innocence of their kin and denied the alleged gang-rape of the victim.

Accused Ramu is stated to have been working at a dairy plant. The owner of the dairy plant testified this fact before the camera, adding that Ramu was there from 8 am to 12. From the statements of the village and the documents we showed you, some questions arise:

To answer these questions, Zee News once again spoke to the family of the victim.

In this controversial case, the Hathras police is also a third party. It had tried to suppress the case and cremated the victim’s body in the dark of night allegedly without seeking the family’s permission. They further committed mistakes and prevented media and leaders from meeting the victim’s family. The victim’s family was not allowed even to leave their house.

The big question still looms large if the victim was raped? The Forensic Report of the Medical College of Aligarh Muslim University and Safdarjung Hospital in Delhi have not proved it. Rather, the report said that the victim was assaulted.

The AIIMS Medical Board, however, has given its clarification sating that it has submitted it report to the CBI, which also issued a statement that it is still probing the matter from every angle. The AIIMS and CBI had to issue a clarification in this matter because the two organizations were sandwiched in the TRP battle of news channels.

The officials are scared to talk to journalists even informally as they fear their talks can be recorded without their permission. The formal information on the AIIMS report is yet to be released in the media, but the battle is being fought in the media on the basis of so-called sources as no one is ready to wait for the truth to come out.

A.O.C.’s Mistake in Pulling Out of a Rabin Memorial

How the Republican Convention Created Money Woes in Two Cities

Syrian Doctor Accused of Torture Is Arrested in Germany

Fugitive Iranian Judge Dead After Fall From Hotel in Romania