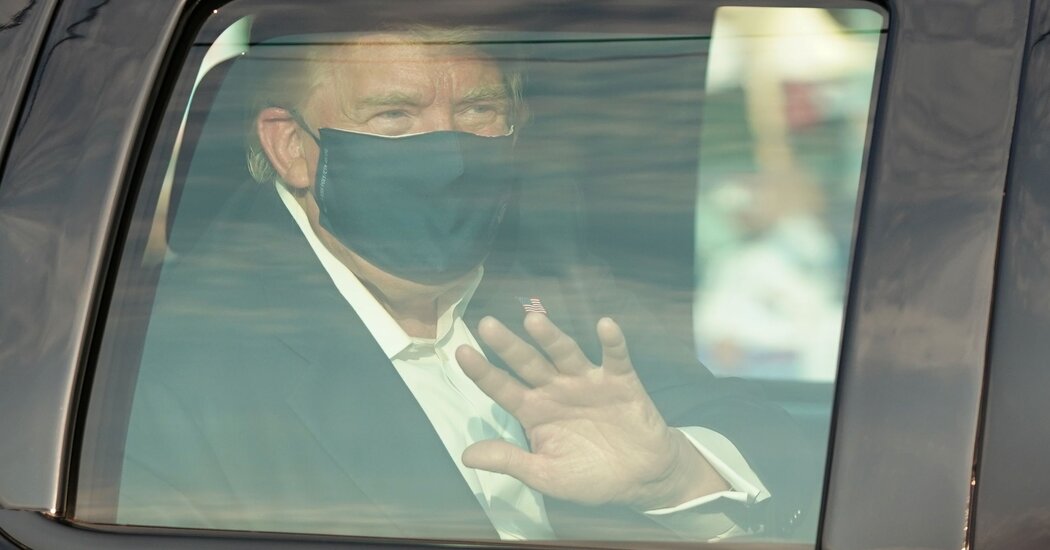 Public health experts had hoped that President Trump, chastened by his own infection with the coronavirus and the cases that have erupted among his staff, would act decisively to persuade his supporters that wearing masks and social distancing were essential to protecting themselves and their loved ones.

But instead, tweeting on Monday from the military hospital where he has been receiving state-of-the-art treatment for Covid-19, the president yet again downplayed the deadly threat of the virus.

“Don’t be afraid of Covid,” he wrote. “Don’t let it dominate your life.”

Scientists, ethicists and doctors were outraged by the president’s comments about a disease that has killed nearly 210,000 people in the United States.

“I am struggling for words — this is crazy,” said Harald Schmidt, assistant professor of medical ethics and health policy at the University of Pennsylvania. “It is just utterly irresponsible.”

Dr. William Schaffner, an infectious disease specialist at Vanderbilt University Medical School, called the president’s message “dangerous” because it encouraged his followers to ignore basic recommendations to keep themselves safe.

“I don’t wear masks like him,” he said of the Democratic presidential candidate Joseph R. Biden Jr. at a debate last week. “Every time you see him, he’s got a mask. He could be speaking 200 feet away from them, and he shows up with the biggest mask I’ve ever seen.”

On Sunday, Mr. Trump left Walter Reed National Military Medical Center for a car ride to wave to his supporters outside, an act that infectious disease experts said put Secret Service officers inside the vehicle at risk of contracting the virus, which can be airborne.

Mr. Trump’s tweet may lead some people to believe that Covid is on the decline, when in reality, it’s still largely uncontrolled in the United States, and numbers have been rising, experts said. Over the past week, there has been an average of 43,586 new cases a day, a 6 percent increase from two weeks earlier, and 720 deaths a day.

Experts pointed out that Covid-19 has “dominated” the lives of millions of Americans, particularly Black and Latino people who have been hit with devastating force by the virus. The death rate for Black Americans diagnosed with Covid-19 is more than twice the rate for white Americans.

“When you speak to families in those communities, I’m sure there will be a difference of opinion in regards to whether this is to be thought of as insignificant,” said Dr. Leon McDougle, president of the National Medical Association.

And while experts recognized the president’s desire for an economic recovery, they also warned that until the country got the virus under control, it would continue to sicken people and hobble attempts to reopen businesses and schools.

“We understand the economic issues, we understand the consequences of shutdown,” said Rajesh Gandhi, an infectious disease physician at Harvard Medical School and Massachusetts General Hospital. “But there has to be a coordinated response so it doesn’t have to dominate our lives.”

Mr. Trump, after being in the hospital for three nights, said he was feeling better than he felt 20 years ago. But the president has had access to a suite of treatments that few others have, including an antibody cocktail that is still in clinical trials and has not yet been authorized by the Food and Drug Administration.

And unlike average Americans, many of whom were unable to get tested for the virus or who got care in hospitals overwhelmed by patients sick with Covid, Mr. Trump has had a full team of specialists devoted to his needs at the Walter Reed medical center. His home, the White House, has a medical unit that his physician, Dr. Sean P. Conley, said on Monday was “staffed 24/7.”

To patients who were not as fortunate as the president, his message was distressing. Many, like Jennifer English, who is still grappling with the long-term effects of an infection she contracted in April, were unable to get medical care when they needed it.

“It makes me irritated — he can check himself in and has a team of 14 doctors; most of us couldn’t find one doctor to listen to us,” said Ms. English, a 46-year-old mother of three and restaurant manager from Oregon City, Ore., who called the president’s message “reckless.”

Ms. English still has fatigue, bouts of nausea and vomiting, blurry vision and brain fog. She used to run marathons. Now she gets short of breath when she walks her dog around the block, she said, and takes two naps a day.

“You’d think with him contracting it, he’d gain a little empathy, and a little knowledge, but apparently not,” Ms. English said. “He’s still downplaying it, and saying ‘don’t let it dominate your life.’ It dominates my life. Every minute of my life is dominated by it.”

A virus cluster erupts in the Arkansas Legislature and the state surgeon general’s family.

Mexico City’s mayor tests positive as the city grapples with a surge in cases.

When We Can Hug Again, Will We Remember How It Works?

A virus cluster erupts in the Arkansas Legislature and the state...

Mexico City’s mayor tests positive as the city grapples with a...