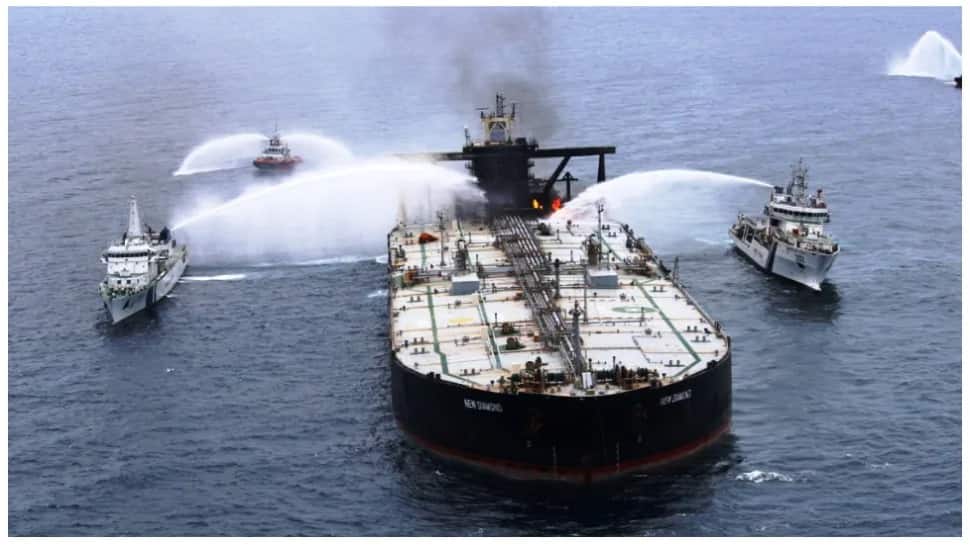 New Delhi: Three Indian Coast Guard (ICG) ships are escorting damaged crude tanker MT New Diamond, as it is being towed away from the Sri Lankan Coast to the Fujairah Port in the United Arab Emirates. The tanker which was rendered immobile or ‘dead in the water’ after a severe blaze in the engine room is being towed by a team of salvors that have been arranged by the vessel’s owners.

According to Marinetraffic.com, the MT New Diamond is a 20-year old Crude oil tanker that is 333 meters long and 60 meters wide, it was under charter by the Indian Oil Corporation. The tanker was carrying about 3 lakh metric tons of Kuwaiti export crude oil.

From its current position off Dondra Head, which is the southernmost point of the Sri Lankan coast, very large crude carrier MT New Diamond is headed for Fujairah, the largest port on the Eastern seaboard of the UAE.

As per the ICG, Pollution control vessels, Samudra Pavak and Sumdra Praheri with an onboard helicopter and ICSG Shaunak with pollution response gear have been deployed to escort MT New diamond, an undertow at high seas.

Coast guard ships are meant to provide preventive pollution response cover in case of any oil leakage contingency during the passage of the vessel to Fujairah.

With full cargo on-board and no propulsion of its own, the tanker is expected to take several weeks to reach its destination, given the drastic reduction in speed while being safely towed.

On September 3, while bound for Paradip, Odisha, MT New Diamond had reported an onboard fire in the engine room, as it was transiting Sri Lankan waters. The Indian Coast Guard and their Sri Lankan counterparts and the respective Navies from the countries along with tug boats had joined the firefighting efforts.

The ICG had mobilized seven ships and two aircraft for this operation and had provided necessary support to the Sri Lankan authorities.

It took a mammoth effort spanning over a week to douse the blaze and ensure that there was no oil spill. Initially, it was said that an oil sheen was spotted, only to be later confirmed that it was from the engine room explosion and not from the cargo hold. The resultant sheen was cleared by the Coast guard by using pollution response equipment and oil spill dispersants.

“The three lakh metric ton cargo of Kuwait crude being carried by vessel is intact, not a drop of it has leaked. Our ships are equipped and prepared to even contain and perform recovery operations even in the event of an unfortunate spill,” Krishnaswamy Natarajan, Director General, Indian Coast Guard had said after the operation.

Speaking of the challenges involved, he said that the ships and tugs are required to stay within a 10-15 meter distance from the burning vessel to fight the fire and conduct boundary cooling in tandem.

“There is a breach on the port side of the superstructure and the hull and the crack on the deck above the waterline. However, these breaches are not causing any entry of seawater,” DG, Coast Guard had stated regarding the structural condition of the ship.

The fire on the MT New Diamond was feared to be a major environmental disaster in the making, as the ship was carrying nearly 3 Lakh metric tons of Kuwaiti crude oil and a leak would have meant an unprecedented ecological catastrophe.

On completion of the firefighting operation, Vice Admiral Nishanta Ulugetenne, Commander of the Srilankan Navy conveyed his appreciation for Indian Coast Guard’s efforts in dousing the fire and neutralizing oil sheen, thereby averting a major disaster.

Care of elderly during COVID-19 pandemic: Supreme Court grants 4 weeks to states to...

She Doesn’t Make Animals Cry, but She Collects Their Tears

Lacklustre Ganesha festivities in Karnataka due to coronavirus, floods