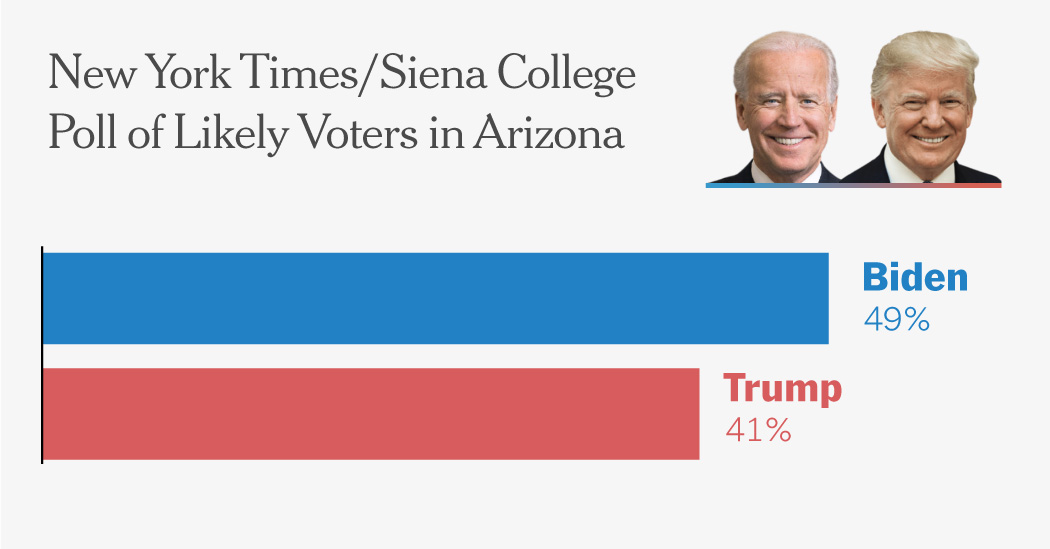 Joe Biden holds a significant lead in Arizona after the first presidential debate, a new survey released Monday showed, as Arizona Republicans face dissent in their ranks and an influx of Democratic-leaning voters in one of the nation’s fastest-growing states.

The poll began on Thursday, hours before President Trump announced he had contracted the coronavirus. Mr. Biden fared significantly better in interviews conducted on Friday and Saturday, after controlling for the demographic characteristics of the respondents. Two nights of interviews in one survey, however, are not enough to make any confident claims about the effect of the president’s diagnosis on public opinion.

The result is better for Mr. Biden than his average lead of four points from other recent Arizona surveys, but it is essentially unchanged from the last Times/Siena poll of the state in September, which showed him leading by nine points, 49 percent to 40 percent. Right or wrong, Times/Siena surveys of Arizona have tended to show bigger Biden leads than other surveys of Arizona this cycle.

The findings confirm that the Republican grip on Arizona is in jeopardy, after it spent decades as a bastion of Sun Belt conservatism. It was the home of Barry Goldwater and John McCain, but the state’s Republican vote has fractured during the Trump era. The president became embroiled in high-profile battles with the state’s former Republican senators, Jeff Flake and Mr. McCain, who died in 2018. An influx of new voters has deepened the party’s woes, threatening to turn another state blue in the once reliably Republican interior West.

In 2016, Mr. Trump won the state by 3.5 percentage points, a significant decline in Republican standing since Mitt Romney’s nine-point win in the 2012 presidential election. In the 2018 midterms, the Democratic Senate candidate, Kyrsten Sinema, defeated Martha McSally by more than two points.

In the race for U.S. Senate next month, the Democrat Mark Kelly leads Ms. McSally — appointed to the Senate seat once held by Mr. McCain — by 11 percentage points, 50-39.

A shift among Republican voters in the state toward Democrats appears to represent about one-half of the Republican challenge in the state, while the changing electorate makes up the other half.


What different types of voters said

Based on a New York Times/Siena College poll of 655 likely voters in Arizona from Oct. 1 to Oct. 3. Subroups of fewer than 50 respondents are not shown.

Meaningful defections. The president has suffered modest but meaningful defections among the voters who supported him four years ago. Today 87 percent of those voters back him, while 6 percent do not. Registered Republicans back Mr. Trump, 82-9.


Mr. Biden also holds a 55-16 lead among validated 2016 voters who said they didn’t back one of the major-party candidates four years ago, a potentially crucial shift in a state where Mr. Trump won with just 48 percent of the vote. Mr. Biden’s gains among minor-party voters would be enough by themselves to eliminate Mr. Trump’s advantage from 2016.

Big lead among those who didn’t vote in 2016. At the same time, Mr. Biden holds a 22-point lead among likely voters in Arizona who did not participate in the 2016 election. These voters make up a surprising 32 percent of the electorate. That’s the second-highest such group in any Times/Siena survey so far this year, trailing only nearby Nevada — the nation’s fastest-growing state.

Such a huge number of new voters might seem hard to believe, or indicative of the potential for unprecedented turnout. But it is nearly identical to the 30 percent of currently registered 2016 voters in Arizona who were not validated voters in the state in 2012, according to voter file data from L2, a nonpartisan political data firm.

For many of these people, the idea of voting isn’t a hypothetical. Many of them probably cast ballots in other states. Others have already revealed their high levels of political engagement: One-third of the new voters already participated in the 2018 midterm elections, and they represent 10 percent of the 2020 likely electorate. In our poll, they backed Mr. Biden by a margin of 64 percent to 29 percent.

Have a Creepy, Crawly Halloween

356 Elephants Dropped Dead. Did This Bacteria Poison Them?

Abandoned Rio Tinto Mine Is Blamed for Poisoned Bougainville Rivers

Have a Creepy, Crawly Halloween