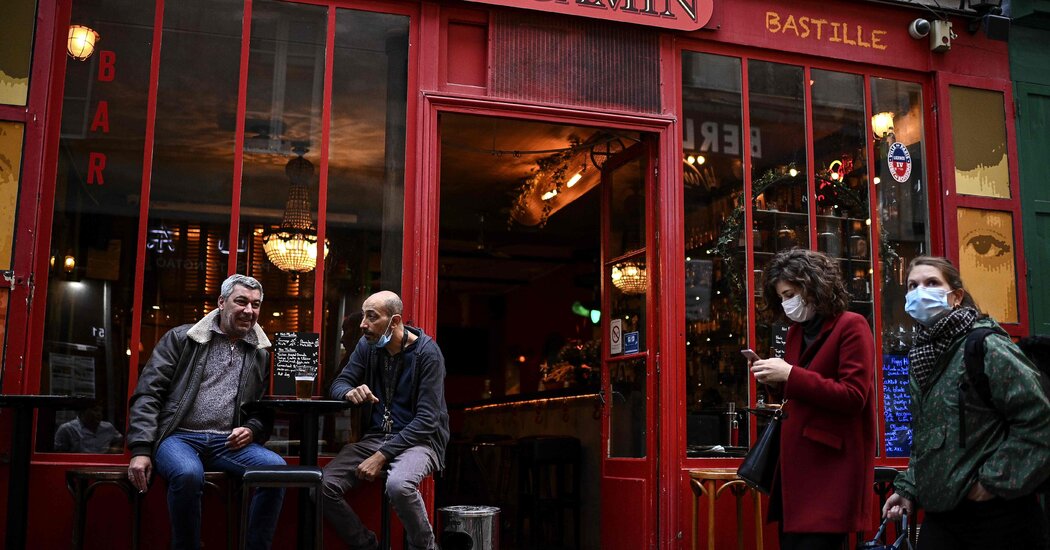 Bars in Paris will close for two weeks starting on Tuesday, the authorities there announced on Monday, as France tries to stem a surge of coronavirus cases in its capital. The measure will also affect most cafes, which in many cases serve alcohol, but little or no food. Restaurants will be able to remain open if they follow a strict health protocol.

Paris joined a handful of other French areas that have been placed on maximum alert because of a continued rise in infections, especially among older people. Local health authorities said the capital had been above the thresholds for the top alert level — more than 250 coronavirus cases per 100,000 people generally, more than 100 per 100,000 in the elderly, and more than one-third of intensive care beds used for Covid-19 patients — since last Thursday.

On average, there are over 3,500 new infections a day in Paris and 203 active clusters, especially among young people for whom the incidence rate is over 500 infections per 100,000 people. In France generally, the seven-day average for new daily cases is above 11,000. The Paris region has as many patients hospitalized for coronavirus as it did in May, when the country was just exiting its two-month lockdown.

Mayor Anne Hidalgo and the head of the Paris police said at a news conference on Monday that the bar closures would apply to Paris and the surrounding suburbs. Gyms, dancing halls and enclosed swimming pools will be closed to adults, though minors will be allowed to use gyms and pools.

“The epidemic is going too fast,” said Didier Lallement, the Paris police chief. “We need to brake now before our health system is submerged.”

Restaurants will have to keep registers of customers for contact-tracing, distance tables by one meter, keep seating to no more than six per table and take payments at the table.

Those restaurant rules will also apply in other maximum-risk areas, including the southern cities of Aix-en-Provence and Marseille, where the authorities had closed restaurants under a tightening of restrictions last month. But bars in those two cities will remain closed for at least another week.

Starting on Tuesday, new restrictions will also apply to universities in areas on high alert, with classrooms and lecture halls operating at half capacity or below. Retirement home visits will become appointment-only, and with a maximum of two people per visit.

“Living with it and protecting, that’s the goal we must have,” Ms. Hidalgo said, adding that she hoped she would be able to come back in 15 days with good news about “the epidemic’s front line.”

Marty Baron Made The Post Great Again. Now, the News Is Changing.