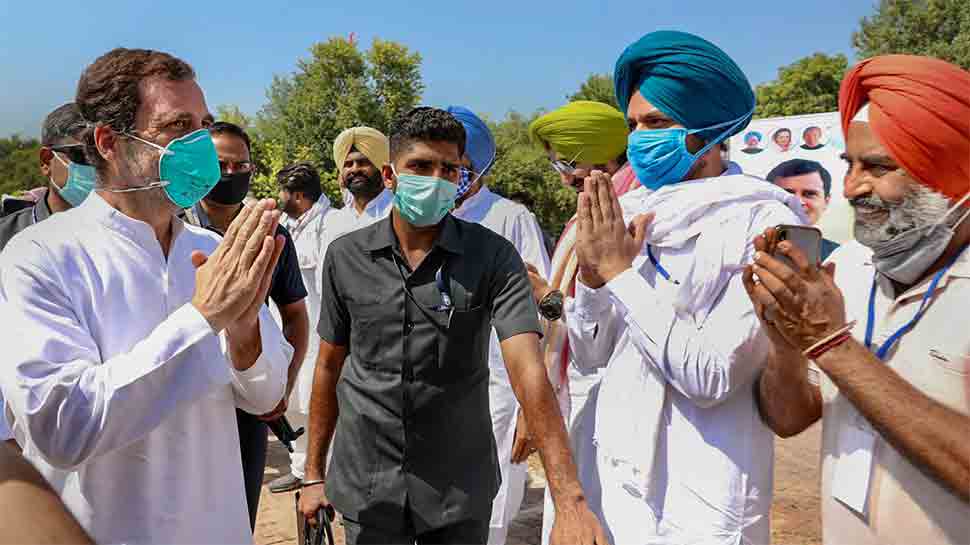 Sangrur/Samana: Congress leader Rahul Gandhi on Monday alleged that Prime Minister Narendra Modi was ‘finishing’ farmers and labourers with the three farm laws introduced recently just as he had “destroyed” small shopkeepers with demonetisation and implementation of GST. Intensifying his attack on the Centre, he also brought up the issue of China and claimed that it had “dared to enter India and kill our soldiers” as Modi has “weakened” the country.

Addressing a public gathering in Punjab’s Sangrur, Gandhi claimed that none of the policies of the Modi-led Central government during the last six years were meant to benefit the poor, farmers or labourers. “All of its policies are made for their three to four select friends,” he said.

Asserting the need to improve the food procurement and Public Distribution System, Gandhi said, “There is a need to strengthen this system. More mandis need to be set up. There is a need to guarantee MSP (minimum support price), to give infrastructure to farmers, to set up silos”.

“Narendra Modi is not strengthening the system… If Modi gives better PDS, guarantees MSP and brings more mandis, then Ambani and Adani cannot make money,” the Congress leader alleged. He claimed the new agriculture-related laws were not only ‘against’ farmers and labourers but the entire nation and were meant to ‘snatch’ the country’s freedom.

“Like he (Modi) finished small traders and small and medium enterprises with GST and demonetisation, he is finishing farmers and labourers the same way and slashing your throats with these three laws,” he said. He also asked the BJP-led Centre why it was in a “hurry” to bring the laws during the COVID-19 pandemic.

“The reason is because Modi thinks if feet of farmers and labourers are hit with axes during coronavirus time, then they will not be able to come out of their houses,” he said.

Addressing another gathering in Patiala, Gandhi said Modi had said that China had not entered Indian territory. “Then how were our 20 jawans killed Who killed them,” he asked.

“China understands that Narendra Modi has weakened India and has taken advantage of this to take control of 1,200 kms of our land,” Gandhi claimed.

The government had earlier termed as “mischievous interpretation” the Congress’ claims that China had occupied Indian territory in eastern Ladakh region.

Gandhi, who is holding a series of tractor rallies during his ‘Kheti Bachao Yatra’ across Punjab to protest the Centre’s new farm laws, further alleged that the PM has “broken the backbone of the country” whose economic growth has plummeted from 9 per cent under the previous Manmohan Singh-led government to -24 per cent at present.

He alleged that the Centre waived the debt of “people like Ambani and Adani” but “finished” small and medium businesses. “Modi ji is clearing the way for Ambani and Adani and you will have to understand this,” he told the gathering.

Stating that it was not “Ambani and Adani” but small and medium sized businesses who generate employment, Gandhi said, “I am saying with a guarantee that this country will not be able to give employment to its youth in the coming time because Modi has destroyed the employment providing system”.

“After GST, demonetisation and coronavirus, Modi ji is now into destroying our food security system,” he alleged. Gandhi said farmers in Punjab, a Congress-ruled state, can approach the administration in if they face any problem in mandis.

He alleged that people would have to pay twice or thrice the price for food once “Ambani and Adani captured the country’s farm system”.

“Tomorrow one side will be Ambani and the other side will be Adani. Can you fight them, can you file a case against them. Certainly not,” he said. He also said lakhs of people will be unemployed with the dismantling of the mandi system.

Quoting Guru Nanak Dev, Gandhi said, “if we do not face the truth today, we will suffer”. “Why is Haryana quiet” Why are the Lions of Punjab not roaring, asked Gandhi and urged farmers to rise against the Centre’s “tyranny”. Gandhi said the Congress will not allow the disbanding of MSP and mandi systems.

“MSP, mandis and food procurement systems are like a wall. Narendra Modi wants to break this wall for Ambani and Adani,” he said.

Gandhi said he will not allow the Modi-led government to attack the “soul” of India. “We will not step back even an inch. We will collectively fight Modi, Ambani and Adani,” he said.

MLA and former minister Navjot Singh Sidhu was not present at the protest rally.

President Ram Nath Kovind gave his assent to the Farmers’ Produce Trade and Commerce (Promotion and Facilitation) Bill; Farmers’ (Empowerment and Protection) Agreement of Price Assurance and Farm Services Bill; and Essential Commodities (Amendment) Bill, which were passed by the Parliament last month.

How Generations of Russians Have Tried to Influence American Elections